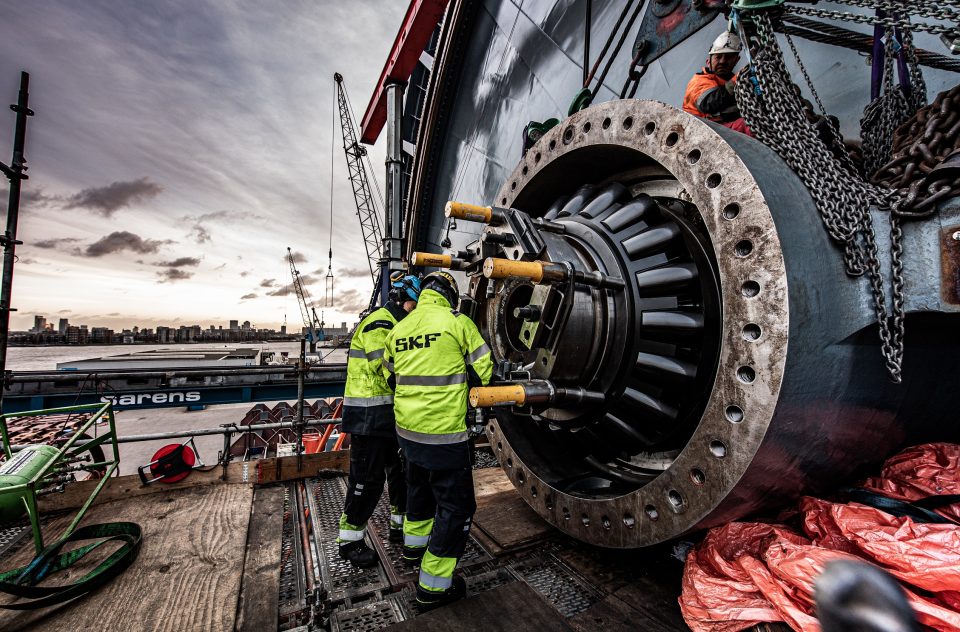 Equipment used in the offshore industry is so expensive, sometimes costing hundreds of millions of dollars or Euros, that it must last for many decades. If market conditions dictate that equipment must start to run more efficiently (in order to extract more oil, for instance), the challenge is on to enable this.

A common approach is to replace major bearings within the equipment, allowing it to handle more rigorous conditions such as higher loads or faster speeds. Recently, SKF helped Norwegian offshore equipment manufacturer NOV achieve just that by supplying it with a unique set of bearings.

Among other things, NOV builds handling and pipe-laying equipment for offshore vessels. In a recent upgrade, it needed to ensure that the bearings on two cable drums could withstand the tough conditions of unspooling pipe into the sea from a pipe-laying vessel.

Conditions on this kind of vessel are hugely challenging, as the bearings are under constant loading, both radially (from the load itself) and axially (from the continuous motion of the ship on the sea).

“It requires very complex engineering because of the uncertainty from the micro motions of the ship,” says Daniel Ortaga, Senior Business Developer at SKF.

The challenge for the bearings had nothing to do with speed, as the drums turn at around one-third of a revolution per minute. Instead, the difficulty was to design bearings that could take enormous loads while moving at such slow rotation speeds.

As well as achieving this, SKF managed to design bearings in standard ISO dimensions, meaning they can be found within its catalogue. Strange as it may seem, these are standard bearings, the largest ISO-sized bearings that SKF has ever supplied.

The large drum used four bearings, in an alternating SRTB/SRB/SRTB/SRB arrangement, which were mounted onto the main shaft. This in itself is a unique arrangement. The smaller drum used two bearings, an SRB, and a CARB. The CARB helped to correct axial and radial misalignment.

Overall, the total weight of the bearings was 28 tons, around the same as that of a humpback whale. The largest single bearing weighed eight tons (more than an African elephant, for comparison).

“We are privileged to have a cooperation with SKF to help solve these massive challenges together with our engineering team in a timely manner”, says Charles Vezina, Procurement Specialist, National Oilwell Varco.

While this is a unique order, it is not the first time that SKF has supplied bearings of such huge dimensions: just two years ago it supplied a three-tons sealed SRB to a copper mine in Peru. Here, the sealed bearing was fitted to a horizontal shaft on a roller press, which operates in very dusty conditions.

Although NOV did not take the early mining application into account when ordering the bearings, it is worth noting that SKF’s ability to prove its expertise is becoming increasingly important: often, SKF finds that pointing to earlier, proven solutions can allay customer nerves in large projects like these.

The order comes at a perfect time for SKF as it celebrates the centenary of the spherical roller bearing, which it introduced to the market in 1919. Back then, the product was a completely new way to overcome angular misalignment in rotating machinery, and available in a limited range of sizes. Despite the many changes to spherical roller bearings over the last 100 years, these latest SRBs, such as SKF’s very first one, will be produced in Gothenburg, before being delivered to NOV in Poland.

Öystein Kristiansen, Key Account Manager at SKF, says: “NOV is a very important customer for us. We hope after this we can do more with them in future.”