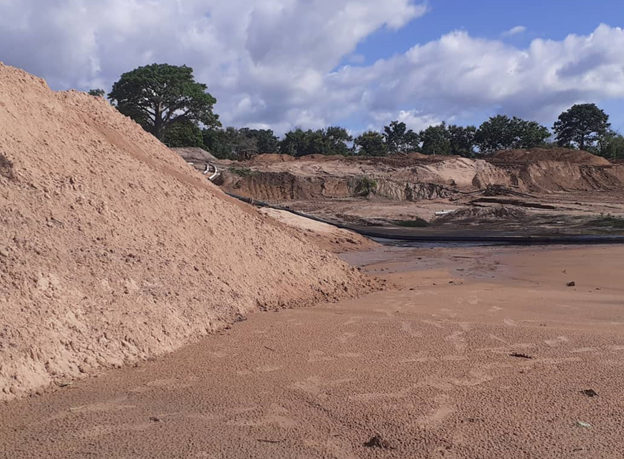 Maimuna Touray, a gardener, has been growing vegetables in Gunjur, an eco-tourism area and fishing village located in the south bank of The Gambia.

In recent times, Touray has become increasingly worried about the activities of miners in her community.

“My garden will be mined like all other mines,” she said. “We have been gardening here for a while now but since these activities have started nothing seems to be right anymore. We also find it difficult to draw water from the wells we dug because the mines have polluted all of them.”

Touray said the gardens are helping her and other gardeners to feed their families. She said the mines have destroyed many gardens that were serving as livelihood for most others in the area. Touray’s fear is the reality of many living at the coastal areas in The Gambia.

In The Gambia, mining and quarrying are becoming a major environmental problem. It is damaging farms, lodges and houses in the coastal villages such as Gunjur, Sambuya, Batokunku, Brufut and Sanyang in the Kombo North/South of The Gambia- some 20 to 50 kilometers away from the capital city Banjul.

The impacts of the mining affect the gardeners, farmers and fishermen as well as threatening people working in the ecotourism industry. The impact can also aggravate climate change by putting rivers, streams, and lakes at risk.

Minerals such as zircon, laterite sand gravel, silica sand and quartz are mined in different locations in the country, depending on where the minerals are. Despite warnings from the geology department that all operators should refill or backfill the mines and rehabilitate them through the compensated fees, some of the mine sites are left in deplorable conditions. They become unusable either by the farmers, gardeners or communities.

Buba Jammeh, a farmer in Sambuya said his farm was totally destroyed by the operators. For now, he has no farm to work on to feed his family.

He used to grow oranges and cashews and he made around 10, 000 dalasi ($190-200). He said the damage caused to him is unbearable as he now goes to the fish landing to find survival for the family.

The Gambia is rich in quarts with an estimation of 50 million tons in nine localities in both inland and coastal areas. They can be used to produce special industrial glass as well as polished, high-quality plate and high-grade piezo-ductile glasses.

The quartz by-products can be used in producing common plate glass, piezo-ductile glass, glass containing wires, and glass fiber. Most of the quart deposits are in Brufut, Fass, Abuko, Lamin, Darselami and other places.

According WWF, up to 50 billion tons of sand and gravel are mined each year to meet soaring demand from construction and land reclamation – making it the largest extractive industry on the planet. Yet most people have never given it even a passing thought. And nor have most decision makers and river managers.

Who controls or regulates the mines or quarries?

Also, all mining, mineral rights and licenses are issued by the Minister of Petroleum/energy of the Gambia, but only when it is approved by the geology department.

The ministry stated on its website that the Geological Department, being the custodian of the Mines and Quarries Act, regulates the extraction of the mineral resources of the country.

“Section 4(2) of the Mines & Quarries Act, (2005) clearly stipulates that all mineral resources belong to the state. Section 113 of the Act provides for environmental protection in the activity in accordance with the provisions of the National Environment Management Act (NEMA), 1994. Section 115 of the Mines & Quarries Act provides for the development of Regulations by the Minister responsible for Mineral Resources in order to give a better effect to the Act.”

Who is benefiting from the mines?

Mommodou Samega Janneh, an activist, has accused the geology department for always keeping quiet about the exploitation going on in the mining communities.

“They’re making lot of money together with the mining companies,” he said.

Janneh is one of the few Gambians battling with sand mining companies over their continuous destruction of the ecosystems in his hometown, Sanyang, a coastal fishing village.

“The operators have destroyed the roads and polluted all over the area,” Janneh said.

Janneh said the miners would mine his plot of land he bought over 20 years ago if he keeps silent because they already mine close to his perimeter fence.

“This area was reserved for TDA (Tourism Development Areas) and also for our children and grandchildren but the miners continue to ruin the area, their actions have led people to sell their properties or abandon them, due to heavy noise and pollution the trucks caused,” he said.

Janneh added that all the roads leading to the mine were totally destroyed and the stones turned to powder. He said the damages are astronomical and the ditches the miners dug will affect properties around them.

In 2017, the mining and quarrying sub-sector grew by 5.7% after contracting 10.3% the previous year, according to Foroyaa newspaper article.

Speaking of royalties, the public relation officer of Brufut Village Development Committee, (VDC) Mommodou Jallow, said his community signed an eight months agreement with GACH (Gambia, Angola, China, Holding) mining company, a household name in The Gambia’s mining industry. The village is given D500,000 equivalent to $9000-10000 as a start and 5% will be given from the profits.

Brufut is also an eco-tourism area with bars, local hotels and fine buildings in some areas along the sea.

The coastal sands dunes were mined up to the 1990s before the government shifted the mining activities to the south in Sanyang, Gunjur and Kartung, most of the sand clay in Brufut then were used for constructions.

Speaking further, Jallow said GACH came into Brufut and they engaged the community, the (Alkali) head of the village and the VDC and they had a thorough discussion.

“At our level at the village committee, we also discussed an MOU and that MOU also is within the plan that was already drafted during the validation document. And we are yet to conclude on that MOU. In that MOU, there are many social responsibilities that GACH has to do and some of which he has already pledged 500,000 dalasi, almost [all of] which has been done. So, we are working on that MOU to conclude, but as of now, we’re on good terms with GACH and there is no violation of any agreement so far. We had solid agreement that is documented,” he said.

He said mitigation issues were also discussed in the EIA recommendation since the deterioration of air quality will affect the host community. He said loss of vegetation/biodiversity alteration of land scape, negative coastal impacts and community impacts that will affect the biodiversity, will all be rehabilitated.

The land area identified is 6.8 hectares but the operators are taking 3 hectares from the 6. The mine is 340 meters from the high way and 100 meters away from the Atlantic Ocean.

We cannot verify the agreements between the companies and the host communities but in some communities the ecosystem is severely destroyed; no mitigation measures were held in areas such as Gunjur, Sanyang and Sambuya. In Gunjur where Unity Mining is operating, commuters and beach bar owners rose against the operators who were destroying everything and excavating their roads which forced them to take longer roads since all the shorter roads where been mined.

Mining can also raise climate change impacts. Omar Sambou, a lecturer in the Environmental and Science Department at the University of The Gambia (UTG) and programs manager at Climate Watch The Gambia, said sand mining has changed the natural beauty of their coastline. He said this poses a long-term irreversible consequence to the coastline if effective restoration efforts are not properly deployed.

“Most worryingly, people rarely see this issue as a major environment, economic and social problem that needs serious policy engagement. Restoration of sand mining areas along the Gambia coastline should be an idle issue that needs put off into the future. The issue needs urgent attention to avoid lasting harm to coasts,” he said.

Meanwhile, in an article published by Standard Newspaper, the CEO of GACH, Abubacarr Jawara, is said to be one of the richest men in The Gambia and made his fortune in Angola, eighteen years ago through selling credit cards for a GSM company.

In 2007, he registered the company and started sand mining in 2018. The same company also owns a tomato factory which this reporter visited at Yumdum /Bunjulinding but could not get in the premises.

Jawara denied that his company is evading tax as he owes more than 2millon on liability. He also said they export 15,000 tons of black sand instead of 16000 and that the mines were there before he started.

“Out of that, only US$293 thousand (D15.1 million) – less than 13 percent of the revenue – has been paid to the government as royalties,” Malagen reported.

Investigation by Malagen further revealed that GACH Mining has been operating without environmental clearance and, from a conservative estimate, owes a potential tax liability of more than D2 million (approx. US$40,000), having never paid tax since inception in 2017 and does not even keep a tax file with the tax authorities.

The geology department could not be reach for comments. The department asked for a request letter which was submitted but the letter was yet to be replied as of press time.

Ghana accrues over $6.5 billion in oil revenue in 10 years

SA’s gold industry is running out of growth options. That’s where technology might help