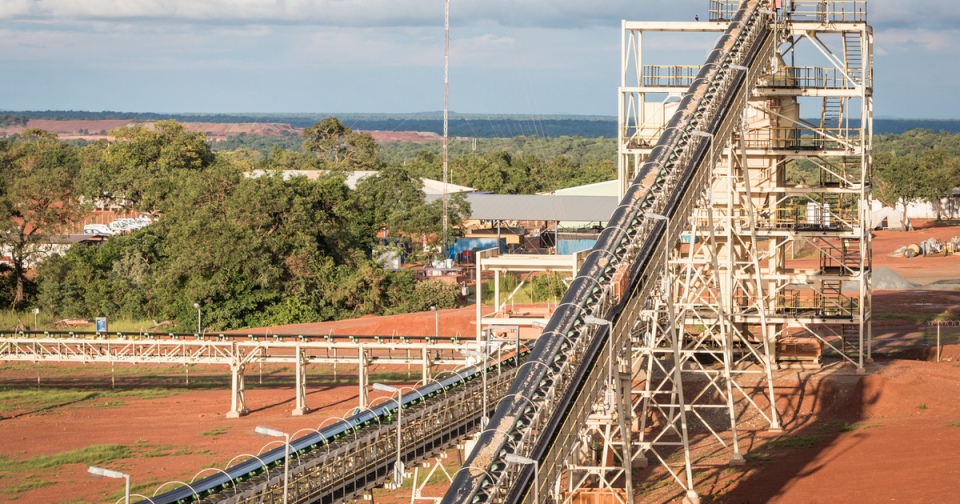 Hummingbird Resources has provided an update on its extensive 2021 exploration drilling  programme at the Sanioumale West (“SW”) and greenfield deposits, Kama and Diaban, at the Yanfolila gold mine in Mali (pictured).

The company has received and analysed c.12,800 metres of multiple assays from the SW deposit and assays from the initial drilling completed at greenfield deposits Kama, and has now completed its 44,000m 2021 exploration drilling programme at Yanfolila.

Results show significant grade and depth, such as 8 metres at 20.82 grams a ton at the SW deposit, highlighting upside potential to the deposits’ current Resources and Reserves profile (164,200oz and 50,400oz respectively).

Kama and Diaban are two new greenfield targets receiving their first round of drill testing, showing  the potential to establish new resources at these deposits. Notable drill results from the SW deposit include:

▪ Notable initial drill results from the Kama and Diaban deposits include:

The 2021 SW drilling has been focussed on extending the Inferred Mineral Resources and testing  for additional and new Mineral Resources extensions. To date, the SW drill results show high-grade  mineralisation exists and remains open at depth

Greenfield drilling is at the reconnaissance stage at the Kama and Diaban deposits where the focus  has been on testing for mineral resource potential and testing of gold mineralisation along a  prospective regional structure respectively. The Greenfield drilling results show:

The company is analysing future exploration potential in these areas, in particular at Kama, to  further prove up their resource potential.

Dan Betts, CEO of Hummingbird Resources, said: “With today’s positive drilling results from SW, in addition to the greenfield drilling results, we see potential for additional Resources and Reserves growth, taking us one step closer to the company’s strategic goal of achieving a +10-year Reserve mine life at Yanfolila.”

Now that this year’s extensive drilling campaign at Yanfolila has concluded, its geology team is interpreting these assay results, and those to come, to delineate additional Reserve and Resource ounces for the exploration drilling campaign in 2022, all of which will be included in our updated 2022 company resources and reserves statement, scheduled for release in Q2 2022.

Following on from the successful 2020 mineral resource infill drill programme at SW, the focus for the  2021 drilling has been to follow up on the open-ended mineralisation that could lead to further open pit  extensions, and which would increase the mineable reserves available to add to the operation’s life of mine plan; 44 holes were drilled and as per the included sections, these were targeting down  dip or along strike extensions below the current pit design or below the base of the modelled inferred  mineral resources.

The current Mineral Resources at SW are made up of a significant portion of lower grade material ideally  suited to heap leaching, as shown in recent bottle roll metallurgical test work. By including and targeting  these lower grade resources in addition to the high grade CIL feed material, there exist many targets to  continue growing the mineral resource and its mineable reserves. Drill testing at SW is still relatively  shallow. An increased understanding of the mineralisation controls and gold distribution at deposit will  assist in its growth as an important ore source for the operation, which has recently started to be mined.

As part of the LOM extension strategy, two new targets, Kama and Diaban, were drill tested to evaluate their Mineral Resource potential.

At Kama, where historical shallow artisanal workings existed along the same structure hosting the  Soloba mineralisation and the Komana West deposit, 21 RC holes on a line spacing of 80m were drilled  for 1,800m. In each drill section, narrow zones of mineralisation were intersected, confirming the  existence of a mineralised system underlying the area. The third and northern most drill section  intersected two shallow and separate mineralised intervals that remain open to the north and not drill  tested to date.

The Diaban drilling was testing a conceptual target over a 1.5-km-long portion of the regional Siekorole  Shear Zone (near its intersection with the Sankarani Shear Zone upon which Gonka, Komana East and  Sanioumale East deposits are located). This drilling intersected gold mineralisation, a highly positive  sign that the structure is connected to a mineralised system. Further study and analysis of the drill  results, the RC chips and exploration data sets is required before further follow up drilling can be planned in 2022.