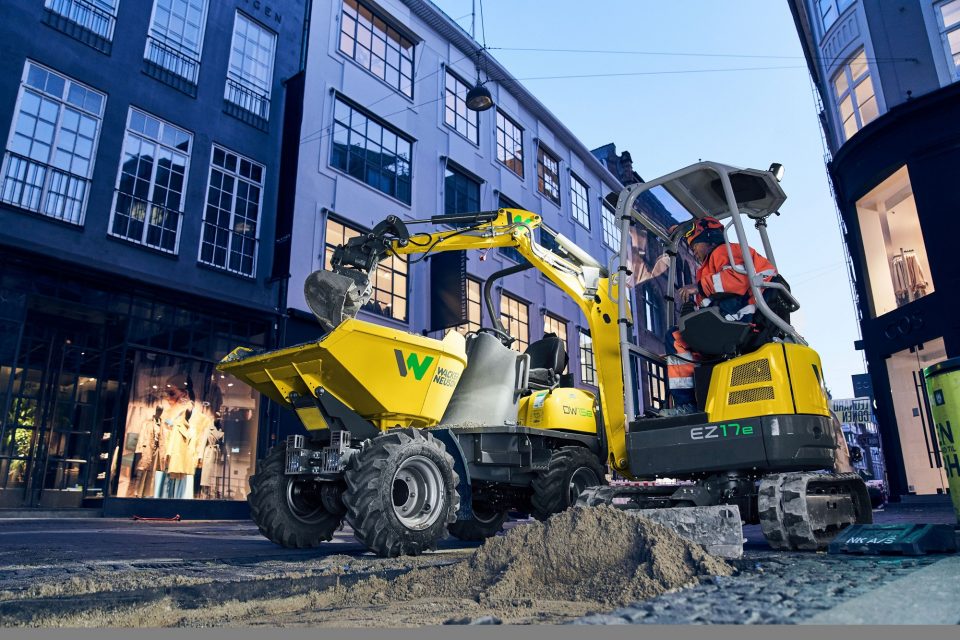 With the fully electric mini-excavator EZ17e, the Emission-Free Construction Site is becoming a reality.

(Munich, August 2020) Wacker Neuson is expanding its zero emission range to include the electric mini-excavator EZ17e. With solutions by Wacker Neuson, an entire inner-city construction site can be operated fully emission-free and almost free of noise. Due to its specially developed battery technology, flexible charge management and efficiency output, the compact excavator can be applied in as many ways as a conventional model of the same class, completely without compromise!

As Wacker Neuson has already shown many times, the company is thinking in terms of holistic solutions with its zero emission series. “In 2015, we put the first battery-powered rammer on the market and from the start, designed a sustainable system for our customers’ purposes. Today, the modular battery can be used in seven units,” says Alexander Greschner, Sales Director of the Wacker Neuson Group. “With the mini-excavator EZ17e, we have expanded our zero emission series. With more than twelve machines, an entire inner-city construction site can be operated completely free of exhaust emissions – without limitations in the sequence of operations or in performance, not least because of the consistently retained zero-tail design.” That the trend is heading in this direction is also shown in the increasingly stricter specifications for environment and user protection on the national and international levels. Further, various cities are thinking about requirements for pollutant reduction, particularly in the area of the inner cities, and are beginning to support the application of low-emission machines.

The first question when it comes to battery-powered equipment: How long can I work with the battery? Wacker Neuson’s answer: a whole workday, even without intermittent charging!

The mini-excavator EZ17e, with its integrated lithium-ion battery, can be used either without a power cable or also, during stationary activities, charged at power sources from 100 to 415 volts in ongoing operation. At all times, the operator can see the current charge level of the battery but also, for example, track whether the power supply network on the construction site is overloaded and take the excavator off the network if necessary. A full charge can be achieved at a household outlet (110-230 volts) or by quick charging with high-voltage current (415 volts) in only four hours. High-quality lithium ion battery technology has been in use by Wacker Neuson for several years already and is especially durable. It ensures that all hydraulic functions have the performance of a conventional model of the same class. This way, customers can be sure of working just as flexibly and efficiently with the electric excavator as with a diesel-powered machine – in short: no exhaust emissions, no compromises.

“With the EZ17e, we have implemented a zero-tail concept with generous performance dimensions. With the efficient, intuitive and emission-free excavator, we satisfy the high standards of professionals who work in particularly confined space conditions, as is usual in interior demolition, for example,” says Stefan Bogner, managing director of Wacker Neuson Linz GmbH, the research and development center of expertise in excavators within the Wacker Neuson Group. Due to the battery system with integrated battery heating, the excavator can be operated even at low outside temperatures. It just has to be connected – the integrated battery management system does the rest. Besides the easy handling, customers benefit from minimized maintenance and service costs as well as lower energy costs in operation. At the beginning of 2020, the excavator was given the SaMoTer Innovation Award for its efficiency, an optimum integration of the electric drive in the zero-tail concept, and its performance.

Flexible in application – easy to operate

The mini-excavator is a zero-tail model, i.e. without rear overhang. This makes it particularly maneuverable and compact, and thus ideal for application on cramped construction sites or indoors.

An intuitive operating concept makes it easy for the operator to keep all functions within view. The excavator can be easily steered using a Jog Dial system. All important information, for example the charge level of the battery, is clearly shown on the 7-inch full color display. There is also the new option of operating the quick hitch system via the display, no longer via the dozer blade lever.

The zero-emission series by Wacker Neuson currently includes three battery-powered rammers and three battery-powered vibratory plates, a dual power mini-excavator that can be operated with an electro-hydraulic drive unit in addition to the diesel engine, an electric mini-excavator, an electric wheel loader, electric track and wheel dumpers and an internal vibrator system for concrete consolidation. With this wide-ranging portfolio, a typical inner-city construction site can be operated emission-free and at low noise levels. The zero emission solutions are usually applied in environments in which exhaust fumes and noise should be avoided, for example for demolition and reconstruction work indoors or on night job sites in the inner city.

The excavator in application on an emission-free construction site: https://youtu.be/J7DR7aF0f18

About the Wacker Neuson Group

The Wacker Neuson Group is an international family of companies and a leading manufacturer of light and compact equipment with over 50 affiliates and 150 sales and service stations. The Group offers its customers a broad portfolio of products, a wide range of services and an efficient spare parts service. The product brands Wacker Neuson, Kramer and Weidemann belong to the Wacker Neuson Group. Wacker Neuson is the partner of choice among professional users in construction, gardening, landscaping and agriculture, among municipal bodies and recycling companies as well as rail transport and industrial enterprises. In 2019, the Group achieved revenue of EUR 1.9 billion, employing more than 5,500 people worldwide. Wacker Neuson SE shares are listed on the regulated Prime Standard segment of the Frankfurt Stock Exchange (ISIN: DE000WACK012, WKN: WACK01) and the SDAX index of the German stock exchange.

Consider it pumped with the WEDA from Atlas Copco

Reinforced materials are no longer a problem to recycle: the rebar can be quickly separated without hindering the job site