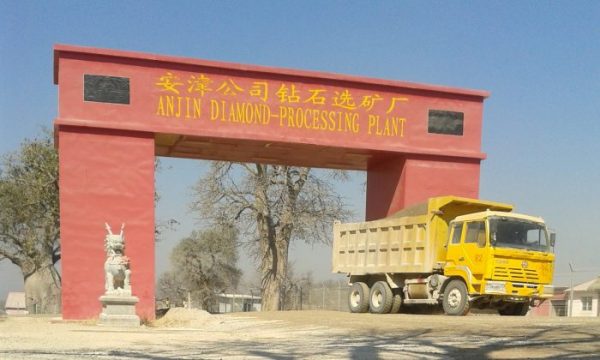 President Emmerson Mnangagwa’s government has allocated fresh diamond mining claims to Anjin Investments in Chiadzwa, in Manicaland province, four years after the company was evicted from the mineral-rich area alongside other miners on allegations of under-declaring proceeds, the Zimbabwe Independent can reveal.

Anjin, which resumed operations in December after the authorities parceled out the new claims, is owned by Anhui Foreign Economic Construction Company Limited of China and Matt Bronze, a shadowy investment vehicle controlled by the Zimbabwean military.

The resumption of operations was initially scheduled for July last year, but commenced in December, with the miner racing to make up for “lost time”, a source say.

The decision to parcel out lucrative claims to Anjin Investments follows spirited lobbying by the Chinese government, which placed Mnangagwa under immense pressure to allow the miner back in Chiadzwa after a four-year hiatus. In 2018, Mnangagwa visited the Asian economic powerhouse where Chinese President Xi Jinping expressed dismay over how Zimbabwe was treating Chinese investors. In reality, Anjin Investments never left the diamond-rich Chiadzwa area, but only discontinued operations after the government terminated the miner’s operating licence in 2016.

A senior official privy to the protracted negotiations which led to the restoration of Anjin’s operating licence told the Independent this week that the government had finally caved in to Chinese demands, but went a step further by allocating the company fresh mining claims.

“The company (Anjin) is already on the ground mining. It has not had a smooth start since resuming operations in December after a four-year break. The company was allocated fresh diamond claims in December after lengthy negotiations with the Ministry of Mines and Mining Development,” a source said.

During the four-year break, Anjin was stripped of assets worth millions of dollars, prompting the government to launch an investigation into the matter.

Although finer details pertaining to the size of the diamond concession remain hazy, a source this week hinted that the government “carefully identified a lucrative claim” to ensure that Anjin Investments would quickly return to profitability.

“Regarding details and terms of how Anjin was allocated the fresh claims sometime in December, you will have to check with minister (Winston) Chitando,” the source said.

Mines minister Chitando has not responded to questions from this newspaper, despite earlier committing to comment.Anjin said it spent US$225 million before kick-starting operations in Chiadzwa before its mining operations were brought to a halt by former late president Robert Mugabe’s government in 2016.

As a result of the abrupt cancellation of the mining licence, Anjin retrenched most of its workers.

In Zimbabwe, Afecc’s investment portfolio includes the three-star Golden Peacock Villa hotel in Mutare, while it also has interests in the Long Cheng Plaza mall through Anjin. After suspending operations, Anjin was directed to surrender its diamond stockpile which was auctioned by the state-run Minerals Marketing Corporation of Zimbabwe. Subsequently, the miner received its share of earnings after the government had deducted taxes.

The Independent has written extensively on the astonishing plunder of Chiadzwa, described a decade ago as the world’s largest diamond find in a century.