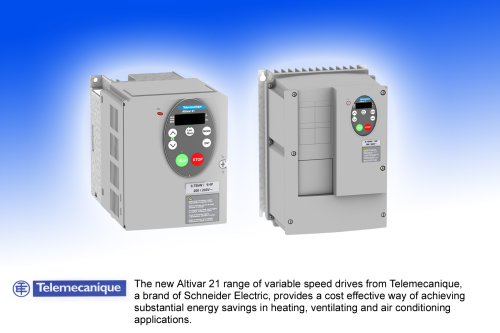 The concept of sustainable buildings is beginning to gather pace, at least in part, and moves in the UK such as the new Building Regulations Part L2 have heightened energy consciousness. However, warns Kevin Jones of Schneider Electric Services and Projects, there remains the need for architects, building services engineers and those commissioning buildings to have a better understanding of the roles different equipment can play.

Whilst the notion of a green building cannot be argued with, the achievement of a truly ‘green as can be’ construction remains elusive. What building engineers can address are the various discrete aspects of the overall building. This is equally true of modernisation and refurbishment projects as it is for new projects.

Attention in new buildings has primarily focused on the materials used, insulation and thermal properties, and energy conservation. The moves toward energy conservation affect pump manufacturers, installers and end users, most notably in heating and ventilation schemes.

This is particularly the case since changes to the Building Regulations that came into force last year. Part L2 of the new Building Regulations puts impetus behind energy efficiency measures. There are some considerations for plant engineers that are still misunderstood by many.

Before looking at why Part L2 affects pump makers and users, it is worth considering what drove the changes to the Building Regulations.

Approximately two-thirds of all energy consumed by industry in the UK is by electrically driven equipment. Yet, more than 90% of all AC induction motors in operation have no speed control. With approximately 40% of all CO2 emissions in the UK coming from buildings, it is not surprising that the government’s focus has increasingly shifted to how much energy a building consumes in the operational phase. Huge savings in both financial terms and in terms of CO2 emissions could be made if inverters were fitted to all continuous duty AC motor applications – such as in fan and pump operation – the predominant use of AC motors in the building industry. The government has therefore been keen to promote the use of inverters in these applications.

New Part L2 regulations came into force on 6 May 2006 and apply to non-domestic buildings beginning construction after this date. The regulations require designers to demonstrate significant reductions in carbon emissions from building energy use relative to the standards set by the previous (2002) edition of the regulations. This is achieved by performing a detailed analysis of the carbon emissions of two buildings:

• The actual building – the building as designed, but subject to standard patterns of occupancy and plant operation.

The analysis must demonstrate that the actual building’s carbon emissions improve on those of the notional building by a specified margin – a significant 28% for an air-conditioned building. It is this improvement that constitutes the tightening of the regulations in the 2006 edition.

• The actual building’s performance must not merely match, but significantly improve on that of the notional building.

• Assessments must be performed under standard occupancy and plant operating conditions. Under the new regulations, some of the data entered by the user to model the building for design work has to be replaced by different data for the purpose of compliance analysis.

• Requirements on the control of summertime solar gains apply to the actual building, not the notional model, and only to rooms without mechanical cooling. In this respect, the 2006 notional building sets a slightly less demanding performance target than the 2002 notional building.

In terms of analysis methodology, the most significant change with respect to the 2002 Carbon Emissions Calculation Method is the requirement for standard occupancy and plant operating conditions. The consequence of this is that, in addition to the actual and notional buildings, the designer will usually need to model and analyse (for design and other non-regulations purposes) a third building, the real building. The real building is the building as designed and with the occupancy and plant operation conditions expected to apply in reality, rather than the standard conditions stipulated for Part L2 compliance.

What these changes to Part L2 demonstrate is that pumps and fans used in HVAC systems must be energy efficient for the building designers to achieve the savings required between the notional and actual buildings. They must also be deliverable in actuality in the real building.

It has been widely acknowledged for some time that fitting variable speed AC control to fan and pump motors saves energy. However, without an understanding of how and why this is the case, energy savings are rarely maximised.

For example, in a sizeable (typical) HVAC centrifugal fan or pump of say, 11 kW, turning the speed down by a minimal 3 Hz can affect massive savings without noticeably affecting flow or performance – in one actual example, savings of £8000 were achieved in one year. Centrifugal vanes often create vortices at the exit point that slightly impede flow at times. Therefore, a slight reduction in speed may also alleviate some of the flow disturbances and contribute to the minor loss in flow as a result of the speed reduction.

The reason such small adjustments to motor speed makes such a substantial impact on energy consumption is because energy in fans, pumps and compressors is consumed under a ‘cube law’. The theory supporting the energy savings is a law that states that the power required by a motor changes as the cube of the flow induced by it (i.e. power μflow3). This indicates that as the flow is reduced or increased by a known factor, the power required by the motor is reduced or increased by the same factor cubed. Empirical measurements confirm savings proportional to the cube law: for example, at 60% speed, fan power is predicted by the cube law to drop by 86%; and it is common in actual installations, where such speed reduction is possible, to see an 82–86% reduction in fan power.

There is good news

Recognising the need to bolster the uptake of energy saving equipment in commercial applications, the government, through HM Customs and Revenue introduced a tax concession to aid the amortisation of the installation of certain approved products. This Enhanced Capital Allowance scheme, as it is known, enables those installing variable speed controls to fans, pumps and compressors to offset the full cost of the product and its installation against income tax in the first year.

Whilst the procedure for making the claims is naturally bureaucratic, it is a real incentive – especially for retrofits and upgrades to existing systems. There have been remarkably few claims from industrial users, suggesting that the incentive has failed in manufacturing applications (or that users are simply not claiming the rebates). However, there is evidence that the scheme has had an effect in the built environment – notably in HVAC applications.

Another factor to encourage the use of variable speed drives on pumps is the evidence that wear and tear on equipment is reduced, leading to greater uptime, fewer repairs and lower maintenance costs.

Schneider Electric’s new Altivar 21 range of variable speed drives provides a straightforward, convenient and cost effective way of achieving substantial energy savings in heating, ventilating and air conditioning applications. The drives incorporate, as standard, a comprehensive range of functions for use with pumps and fans, and feature design elements that minimise harmonic generation.

By replacing fixed-speed starters for fans and pumps with Altivar 21 drives, users not only save energy, but are also able to eliminate inconvenient and often unreliable mechanical flow and pressure control devices such as valves, throttles and diverters. In addition, in almost all applications, the cost of the new drive and its installation will qualify under the government’s Enhanced Capital Allowance (ECA) scheme for 100% tax relief in the first year.

Altivar 21 drives are available in three-phase versions with ratings from 0.75 kW to 75 kW, and can be supplied as IP20 units for mounting within control panels, or as IP54 models that require no additional enclosure.

Compared with general-purpose industrial drives, all types use a reduced value of DC-link capacitor, which means that harmonic generation is minimised. EMC performance is optimised by integral filters, which simplify the installation of the drives and save space by eliminating the need for externally mounted filters.

Standard features offered by Altivar 21 drives include a PID regulator for effective flow and pressure control, automatic catching for spinning loads, adjustable switching frequency for noise and resonance suppression, and adaption of current limiting according to motor speed. Straightforward integration with building management systems is ensured by the availability of optional communication cards, including types for LonWorks, BACnet, Metasys N2 and Apogee FLN.

Comprehensive protection features are also provided, among which are thermal protection with the option to connect PTC thermistors, overload and underload protection, and a jump frequency function to provide mechanical protection for the driven load. To complement these features, the drives also offer multiple fault management and configurable alarms.

For simple status monitoring, and to facilitate minor adjustments, Altivar 21 drives incorporate a seven-segment display panel with a keypad. This enables speed reference and other key information to be checked quickly without the need for additional equipment, and also gives direct access to the last five parameters modified.

One consideration when looking at equipment to aid compliance with Part L2 is power factor. All devices that require current to energise coils can reduce power factor and lead to excess consumption in the form of reactive energy. While the Altivar 21 is efficient, producing near unity power factor on the primary, as most engineers recognise, the high speed switching deployed in modern AC inverters can create power factor degradation on the secondaries. In all AC variable speed pump applications, power factor is affected. Yet few realise the amount that reactive energy charges caused by poor power factor can add to energy consumption and affect utility bills. Schneider Electric cannot change the laws of physics, but it does offer an elegant, simple and cost effective power factor correction remedy.

The perfect theoretical power factor is 100%, or unity, whereby all the power drawn from the supply is used doing functional things. However, much equipment requires power before it usefully functions – such as electric motors whose coils must be energised to create a magnetic flux before the motor can begin to turn. This power is known as reactive energy, and while it appears invisible, it can be charged for on the utility bill. Simply applied power factor correction equipment uses capacitance to locally provide the reactive energy so that all the power drawn from the supply can be applied for functional use.

Power factor correction equipment consists essentially of capacitor banks that store energy required for powering coils, such as in pump motors. In this way, reactive energy usage is minimised. The power factor correction panels from Schneider Electric have a modular construction and can therefore be configured to suit any application at lowest cost. The company also, through its services and projects team, can assist in making power factor calculations and investigating power quality issues in general.

The Schneider Electric website at www.schneider.co.uk now also has a useful power factor correction calculator that can be used on-line to check PF ratings. The Power Factor Calculator requires three values (found on any electricity bill) to work out how much can be saved: Maximum Demand (kW), Power Factor and kVA Availability charge.

By e-mailing these results directly from the page, using the years of experience of Schneider Electric in saving money for British industry, representatives will then analyse the results, suggest a site survey if appropriate and then communicate the most efficient way to achieve the savings.