The Kolondieba Project is held under a joint venture in which Marvel holds 80% and Oklo the remainder.

Three standout targets have yielded gold over one kilometre of strike length and several hundred metres across, with numerous intersections greater than 0.5 g/t observed in five of the 11 targets tested.

The Kolondieba auger samples will provide a multi-element geochemical data that will enhance the understanding of the geology at Kolondieba, the results of which will inform the drill targeting process.

Marvel managing director Chris van Wijk said: “We are extremely pleased with the results of our recent auger drilling campaign at Kolondieba which has multiple holes carrying over 1 g/t gold – exceptional results for auger drilling.

“We have been systematically de-risking Kolondieba over successive phases of exploration, with this latest phase of auger drilling pointing to multiple areas of in-situ bedrock mineralisation present across the project area.

“Kolondieba has all the right ingredients for the next major discovery in the area.”

At Kolondieba, a total of 1,354 holes were drilled across 11 targets, all of which returned bedrock gold anomalism.

Auger drilling is a rapid and cost-effective reconnaissance drilling technique used to test the bedrock to confirm that gold-in-soil anomalies are sourced from the underlying geology and that they have not been transported.

This drilling was conducted as a follow-up to a previous soil sampling program which defined strong and largely coherent gold anomalism passing through the centre of the Kolondieba permit.

The strongest gold-in-soil anomalies were drill tested; however, several other soil anomalies remain untested. Of the targets drilled, many remain open along strike. 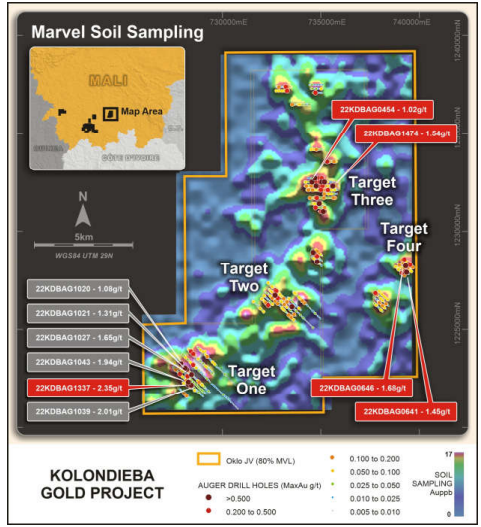 A high-resolution gradient array-induced polarisation survey is planned over targets one to four covering a combined area of about 13 square kilometres.

The results of this survey, in conjunction with the auger drilling assay data, will help to better define follow-up targets for reverse circulation drilling.