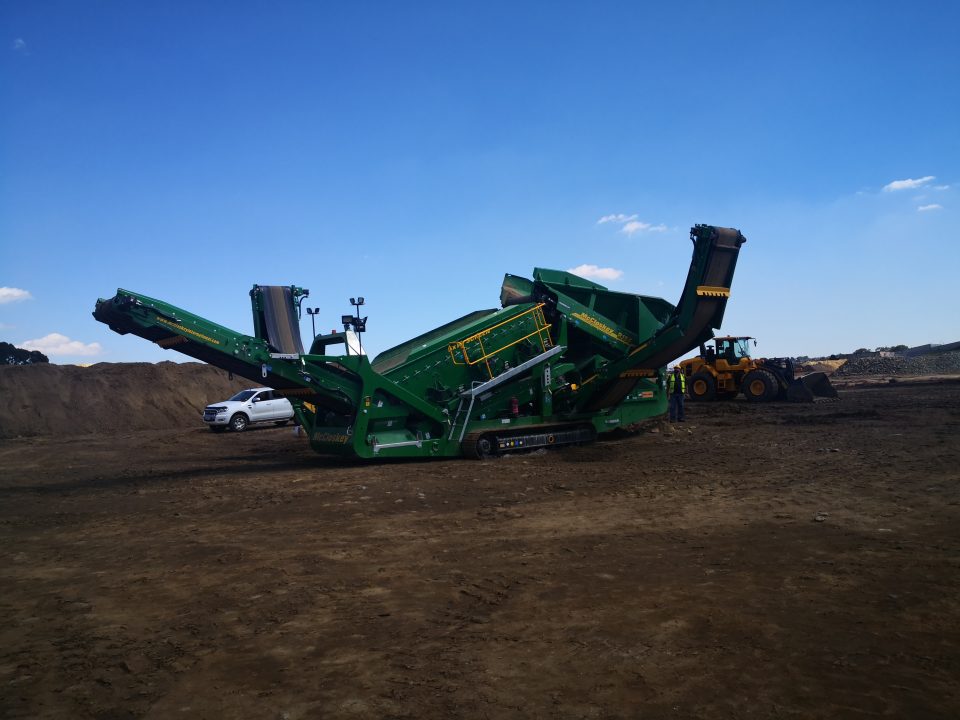 A year after taking delivery of its first ever McCloskey machine from Kemach Equipment, Crush-It Green (CIG) reports that the R155 scalper, deployed at one of its crushing sites in Gauteng, has lived up to expectations.

Founded in 2019 when the two partners took over an existing recycling and production facility that had been in operation since 2016, CIG is one of the few South African companies that holds a Global GreenTag Certification, one of the world’s most trusted and widely recognised ecolabels.

Although CIG is still active in its founding concrete and rubble recycling business, the company has in recent years expanded into crushing and screening of virgin material, working on several sites in Gauteng, including Nigel, Soweto and Germiston. The scope of projects entails screening of gold-bearing dumps for a client and then crush the rock to produce aggregates for the construction industry.

On the back of an expanding project portfolio, CIG went into the market for a new scalper early last year to bolster its fleet. Having traditionally been devoted to a certain premium brand, for several reasons CIG decided to go the McCloskey route and took delivery of its first ever McCloskey R155 scalper in March 2021.

“We have always run a certain brand, but our usual supplier didn’t have stock at the time, and we wanted a scalper quite urgently. We were not keen on a second-hand unit and could also not accommodate the Covid-19 influenced long lead time,” says Clint Rodwell, partner at CIG.

Rodwell says the existing relationship with Bradley Karolus, sales specialist at Kemach Equipment, whom Rodwell had previously dealt with for years before he recently joined Kemach, was one of the key factors in CIG’s purchasing decision.

“Bradley assured us that the McCloskey R155 scalper was equally good, and this has turned out to be true. With his assurances, we decided to take a chance and bought the McCloskey scalper,” says Rodwell. “A year after running the machine, we are happy with the performance and the support from Kemach.”

“McCloskey offers both options – apron and belt feeder – to suit different customer needs. This is based on our understanding that customers require different feeder arrangements for different applications,” says Karolus.

Further machine versatility is achieved through the interchangeable top deck of the machine. “The machine’s top deck can be configured with a grizzly, mesh or punch plate. McCloskey is one of the few OEMS offering such a range of options,” says Rodwell.

Another crucial factor in CIG’s decision was the fact that McCloskey runs common components, such as engines and hydraulics. “McCloskey runs a Cat engine, which is a common motor in the market and the parts are easily accessible from different suppliers,” concludes Rodwell.