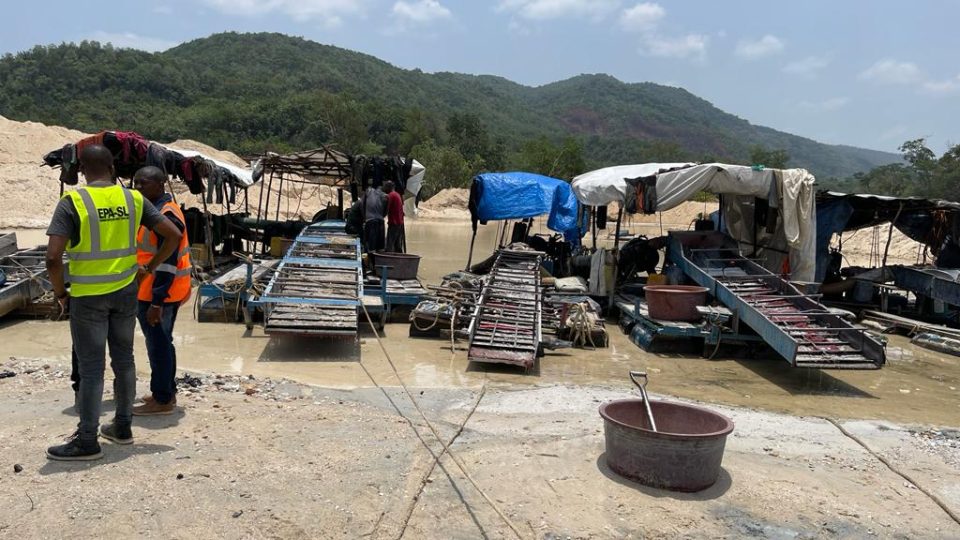 The availability of abundant natural resources in a country is considered to be a blessing by many because of the potential to change the destiny of a country for the better if managed well. Sierra Leone as a country has a huge deposit of mineral resources; whether it has benefited the country is a debate for another day. However, the Environment Protection Agency is concerned about the method of extraction which in our view is environmental degradation at an alarming rate. The mining of minerals from various parts of the country has destroyed several communities leading to biodiversity loss, land degradation and loss of farmland, reducing the potential for agriculture and threatening food security.

Five decades of mining have resulted in deforestation, water pollution, soil contamination and increasing land degradation due to exploration and actual mining operations and in the case of artisanal miners, the failure to rehabilitate or restore mined out areas.

Section 132 of the Mines and Mineral Act 2009 imposes a general duty on every mineral right holder for the protection and management of the environment, particularly to carry out mining operations in a manner that is a ‘reasonably practicable in order to minimize, manage and mitigate any environmental impact including but not limited to pollution resulting from such operations.

However, this provision has not been always effectively enforced by the National Minerals Agency (NMA). The granting of exploration license by NMA without an environmental impact assessment and the right for oversight by EPA remains a compelling challenge for effective environmental management. Often when the EPA undertakes compliance and enforcement monitoring in areas where artisanal mining and exploration licenses have been granted, officers are alarmed at the scale of environmental degradation caused by these unregulated mining and exploration activities which worsens socio economic conditions of people and communities and increase security and health risks as a result of contaminated open mining pits.

However, in recent times, there has been an influx of foreigners in the artisanal sector employing the use of earth-moving machines in contravention of the terms and conditions of their licenses and causing large-scale environmental destruction. The degradation caused by this so-called artisanal mining is unprecedented as the mining is carried out with no regard for the environment. Whilst the mining is done haphazardly with no plan for land reclamation or rehabilitation, it is the environment, health, and livelihood of local communities that remain hugely compromised.

The so-called artisanal mining has largely compromised the integrity of major rivers in the country. Major rivers have become prey to illegal mining activities as dredging and excavation of rivers have become commonplace. The scale of river mining is unprecedented leaving major rivers polluted. The Pampana in the north, Sewa and Taia, in the south, and Moa River in the east have all been affected by illegal mining activities with long-term consequences for drinking water, biodiversity and health not only a local community but of the majority of Sierra Leoneans.

The continuous pollution of rivers due to contamination from the use of chemicals, oil spills, and the discharge of other toxic and hazardous substances means that a lot of local communities, big towns, and cities will be affected by a shortage of drinking water and local fish stock for food and nutrition. Olivia Lai of www.earth.org in her article, “Water shortage: Causes and effects” maintained that contaminated and unsafe water is another contributing factor to water shortage. The high turbidity and the likely toxicity of rivers indicate present and future challenges for several communities with the potential to deny a large part of our population access to fresh water. The United Nations states that having free access to fresh water is a basic right. And losing that access to clean drinking water can be detrimental to human health and lives, as we all need water to survive. Of greater concern are the long-term health consequences that await many Sierra Leoneans who depend on these rivers for domestic purposes including drinking, cooking, and fishing.

Whilst the problem may seem localized only to rural dwellers, there is a looming public health threat to a substantial part of the general citizenry. Major cities of the country largely source their water from environments that are potentially contaminated with mercury and other toxic and hazardous substances.

The Sierra Leone Water Company (SALWACO) sources water for Bo residents from the Sewa River where mercury is potentially used by illegal gold miners. In Kenema, there has been an allegation of the use of Mercury by gold miners in Kamboi Hills where SALWACO also sources water for the people of Kenema. In Makeni though there is no evidence of direct mining in the Kunsho River, illegal mining activities in its tributaries mean that mercury and other toxic and hazardous substances may be present in the river which supplies the people of Makeni. This precarious situation suggests that a large number of Sierra Leoneans have serious threats to short and long-term health complications with the potential to decimate a huge population in different parts of the country.

The former United Nations Secretary-General, Ban Ki-moon, stated in 2010 that water pollution already kills more people each year than war and all other forms of violence combined. This sends a worrying signal to Sierra Leone where water pollution caused by human activities has increased and testing capacity and treatment for mercury are lacking.

Mercury has serious adverse impacts on human health. A report by the Health and Environment Alliance States that high doses of mercury can be fatal to humans, but that even relatively low doses of mercury-containing compounds can have serious adverse impacts on the developing nervous system, and have recently been linked with possible harmful effects on the cardiovascular, immune, and reproductive systems. It can affect the central nervous system, kidneys, and liver and can disturb immune processes, cause tremors, impaired vision and hearing, paralysis, insomnia, and emotional instability.

High blood pressure, altered heart rate, and increased heart attack risks are also associated with mercury impacts on humans. With many recent death cases in the country related to organ failures, pressure, and heart attack, there is a need for a more thorough investigation to ascertain whether or not there is any link with mercury. The National One Heath Secretariat should take a lead in this to save more people and the country from a potential public health emergency and national security crisis.

The Environment Protection Agency has been very proactive in the discharge of its mandate to monitor, manage, and protect the environment by destroying over 50 dredges that illicitly mine on rivers and arresting foreigners in various parts of the country. The Government’s commitment to addressing the problem was seen in the presidential declaration that banned dredge mining across the country which has seen joint monitoring of rivers by relevant institutions.

To address the problem holistically, more needs to be done. EPA and other institutions must continue to monitor the rivers to ensure that all rivers are free from mining activities. There is a need for a state -of -the -art laboratory to test for the presence of mercury and other toxic substances so that appropriate measures can be taken to treat polluted the rivers. Also, water technologies that remove mercury and other heavy metals should be installed at water treatment facilities.