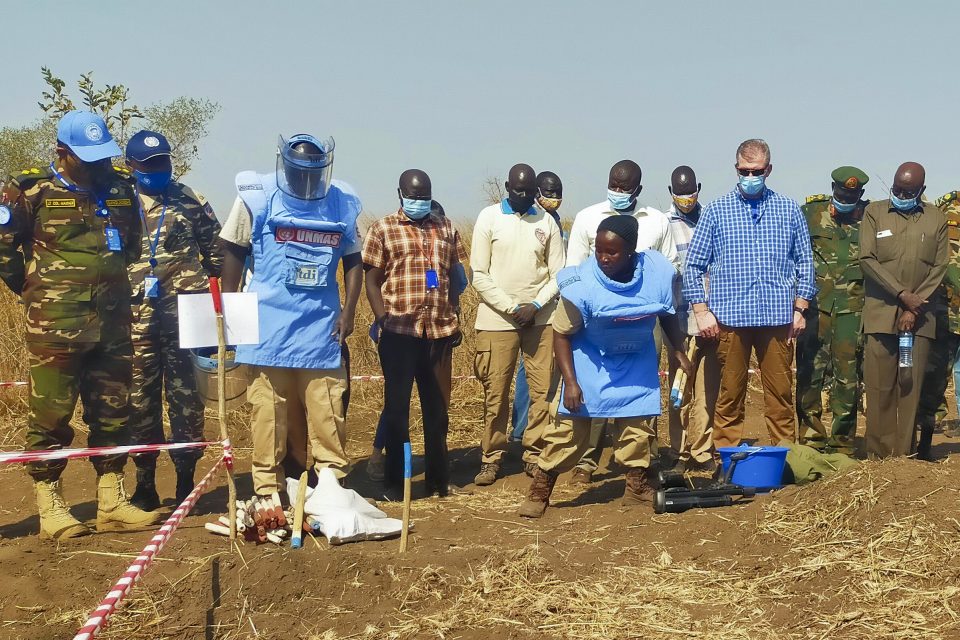 As South Sudan struggles for peace, it’s still cleaning up the deadly threat posed by thousands of land mines from previous conflict decades ago.

Cattle herders. Charcoal collectors. Children. All have been victims of long-forgotten mines that continue to make South Sudan one of the world’s most dangerous countries for unexploded ordnance.

The mines are a stealth problem among the country’s more pressing ones, which include the slow recovery from a five-year civil war, the worst flooding in decades and hunger that’s expected to affect more people this year than ever during the young nation’s decade of existence.

The explosives are a danger to fragile efforts at rebuilding and development. After a road construction company accidentally detonated an anti-tank mine last year just 25 kilometers (15 miles) outside the capital, Juba, a mine-clearing team was in the community of Gondokoro last month to safely detonate over a dozen more.

The explosives were older than South Sudan itself, dating back to the 1980s and the long fight for independence from Sudan. Independence came in 2011, but the remnants of past conflict continue to kill civilians today.

More than 5,000 South Sudanese have been killed or injured by land mines and unexploded ordnance since 2004, according to the United Nations Mine Action Service. More than 1 million explosive items have been found and destroyed in South Sudan during that time, UNMAS says.

Hundreds of victims have been children, curious about the sometimes toy-like objects they discover.

South Sudan is one of 21 countries around the world, including several in sub-Saharan Africa, with the largest amounts of mine contamination among signatories to the 1997 Mine Ban Treaty, the international watchdog group Landmine Monitor wrote in 2020.

Even South Sudan’s relatively low literacy rate poses a risk as written warnings can go unnoticed and leaflets are reportedly thrown away, the group wrote.

Wary residents of Gondokoro have seen other mine accidents in recent years. The danger led them to reduce farming activities and access to a water hole that had been used for cattle, a crucial part of the livelihoods of many South Sudanese.

Resident Jackline Poni, 38, knows she’s often taking a risk when she goes out to look for firewood or find food to feed her three children.

South Sudan’s civil war that began in 2013 and ended five years later delayed efforts to clear the mines. That, and the slow implementation of the peace deal, have denied much of the country basic services, much less the specialized attention that mine-clearing requires.

“What we need now is peace and more de-miners,” said Gondokoro resident Simon Paul, 45, who abandoned farming in the area because he found it unsafe.

Jurkuch Barach Jurkuch, chair of National Mine Action Authority, also blamed the civil war for the threat that mines continue to pose in the country.

Because of the slow pace of efforts, South Sudan recently granted UNMAS a five-year extension, until 2026, of the deadline to clear all anti-personnel minefields in the country.

“South Sudan has challenges years ahead for sure” when it comes to mines and similar hazards, said Fran O’Grady, chief of mine action for UNMAS there. “I will hope in five years’ time, South Sudan will be in far better position.”

The mines and unexploded ordnance still make areas of South Sudan dangerous to travel. That affects everything from farming to aid distribution to the resettlement of people returning home after the civil war.

Some minefields have yet to be surveyed, O’Grady said, notably in the greater Equatoria and Upper Nile areas.

And now climate shocks like the flooding are an emerging threat. O’Grady said they have changed the typical demining season and made it more difficult to reach some areas and plan clearance activities.

“This is a reality that mine action and communities across the country will have to face going forward,” he said.

Investors are rushing back into Africa’s copper country