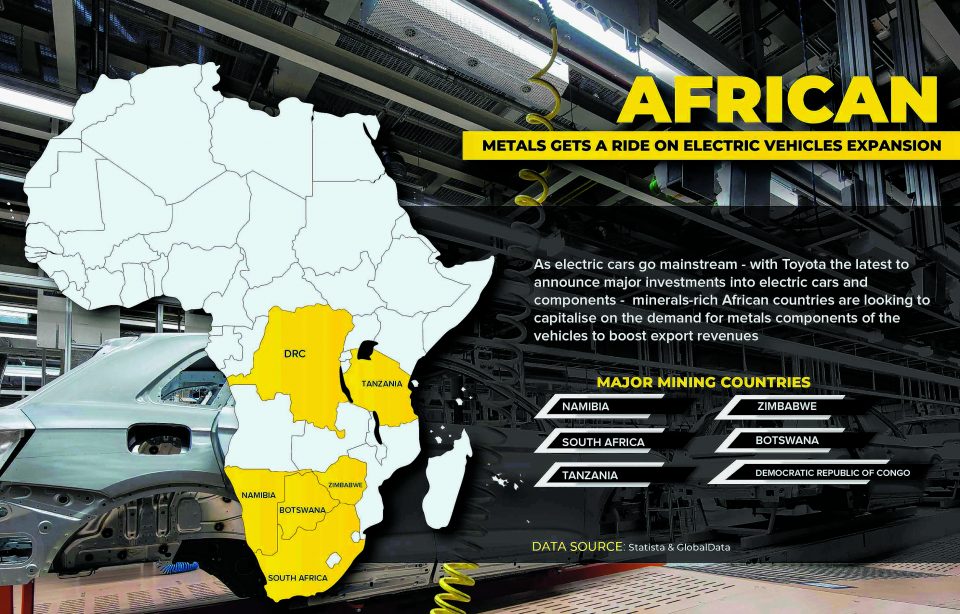 The global race for the production of electric vehicles (EV) is driving demand for Africa’s metals in what could soon plug billions of dollars into the continent’s GDP.

Statista estimates show demand for metals such as nickel, aluminium and iron –– critical components in EVs –– will jump 14 times by 2030, offering minerals-endowed African states an avenue to cash in from the green car revolution.

“This increase in demand can be directly traced to the outlook for electric vehicles over the next ten years, with vehicle battery output expected to rise by tens of millions,” read the projections in part. Toyota this week announced a 13.6 billion US investment into electric cars and hybrids, with some 9 billion US dollars to be spent on battery production alone.

“This demand in metals is pushing a rush from top mining and investment companies across the globe to invest in the acquisition of key materials primarily used in building electric car batteries…market outlooks for solar energy and electric car batteries all seemingly point to an enormous boom in demand and an opportunity to make even more money than in previous fossil fuel endeavours.”

Sales and production of EVs will also continue to accelerate globally, with double-digit annual growth expected in the period under forecast. On the radar of EV manufacturers are major mining countries like the Democratic Republic of Congo (DRC), South Africa, Namibia, Tanzania, Zimbabwe and Botswana.

All enjoy bountiful reserves of some of the precious metals and minerals such as gold, diamond, cobalt, iron ore, coal, and copper.

Upon his landslide victory in the recently concluded Zambian national polls, President Hakainde Hichilema announced plans to ramp up mining in particular, to jump-start Zambia’s economy. Part of his economic blueprint provides for the rapidly growing electric vehicle battery industry, with crucial cobalt and copper identified as key components.

As “first-mover” electric car makers such as Tesla are joined by larger companies like Toyota, some administrations of African mining countries are going to move faster than others. Hichilema has wasted no time announcing his administration’s hopes to plug into EV battery supply chain, and plough proceeds into development. Lithium-ion battery technology is critical to improving the driving range of electric vehicles –– and buried beneath the surface of Africa is a lot of lithium.

For the continent, however, experts argue the real deal is in the production of batteries rather than exporting or raw lithium.

Already, South Africa has announced plans to set up plants to manufacture EVs including components such as batteries.

This could see South Africa develop into one of the biggest players in the multi-billion-dollar industry, given the country’s proximity to raw materials, capital markets and existing manufacturing and export infrastructure.

According to Statista, demand for metals like lithium and graphite is also expected to rise substantially – by around 9-10 times – by 2030.

Zimbabwe and DR Congo are two of the top 10 countries in the world with lithium reserves and the Bikita mine in Zimbabwe holds more than 11 million tonnes of lithium ore.

Recently, South Africa revealed it is working on a roadmap to ramp up investment in the expansion and development of new and existing manufacturing plants to support the production of EVs. (bird)

This includes the production of EV components, with battery manufacture a priority, according to South Africa’s Department of Trade, Industry, and Competition.

The country plans the “creation of a high-yielding business environment, including an appropriate fiscal and regulatory framework that makes South Africa a leading and a highly competitive location, not only within the African continent but globally, for electric vehicle production.”

In a report published on September 1, data and analytics company, GlobalData, said the electric vehicle revolution was set to underpin metals demand, while EV’s are also driving influencer conversations.

“The top keywords among EV conversations of influencers included ‘Mining’, ‘Metals’, ‘Clean Technology’, as well as ‘Investment’ and ‘Climate Crisis’ are corresponding with the rising demand of metals used in EVs,” said Smitarani Tripathy, Influencer Analyst at GlobalData.

“Following the top influencers, which includes not only industry experts, but also journalists and business professionals helps in tracking the popular and emerging trends of the industry on a regular basis for better-informed decision-making in the field of EVs.”

Copper, lithium, cobalt and nickel were the most discussed metals among the influencer conversations on EV topic on GlobalData Social Media Analytics Platform during January-July 2021 while metals like neodymium (a rare earth metal), aluminium and zinc have emerged as new trends during the same time period when compared with previous seven months.

Mining Opportunities in SADC will Favour those in the Know

K-Rotabrush® – A complete clean, without the wear