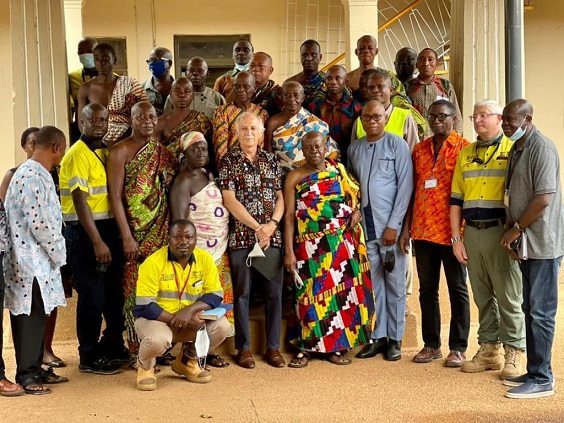 The Asante Gold Corporation has officially been introduced to the Sefwi Anhwiaso Traditional Council in the Bibiani-Anhwiaso-Bekwai Municipality as the new management head of the Mensin Gold Bibiani Limited in Western North Region.

The move was finalized after Asante Gold, a Canadian gold developer agreed to assume control of the Bibiani Gold Mine for a fee of $90million as charged by the Australian gold Miner Resolute mining.

This agreement has been approved by the Ministry of Lands and Natural Resources, while payment is expected to be completed in the next 10 days.

Following the announcement by Resolute Mining on the sale of the Bibiani Mine to Asante Gold Corporation, the Board Chairman of Mensin Gold, Mr Kwame Ofosuhene Apenteng on Monday August 05, led a delegation to introduce the new owner to the Paramount Chief of Sefwi Anhwiaso Traditional Area, Ogyeahohoo Yaw Gyebi II.

Mr Ofosuhene Apenteng noted that, he was optimistic that Asante Gold was highly capable of reviving production activities and pledged his full support and resilience to achieving greater outputs.

He then appealed to Traditional Leaders to make the environment very conducive for Asante Gold as a way of supporting their operations even as arrangements were in the pipeline to fully finalize transaction with the Government to create a shared value for the area.

Mr. MacQuarrie who is also the President Asante Gold Corporation, expressed his appreciation to the Chiefs for the warm reception to him and his team, adding that, “they are happy to have acquired Bibiani Mine and that together with his capable team, they will work to bring the Mine back to production as soon as possible”.

Ogyeahohoo Yaw Gyebi II, who doubles as the President of the National House of Chiefs, welcomed the Asante Gold Corporation to his land, urging them of his unflinching support as long as their activities would engage stakeholders, offer employment and procurement opportunities to his people.

Change of Management at BEUMER Group: Innovation from tradition