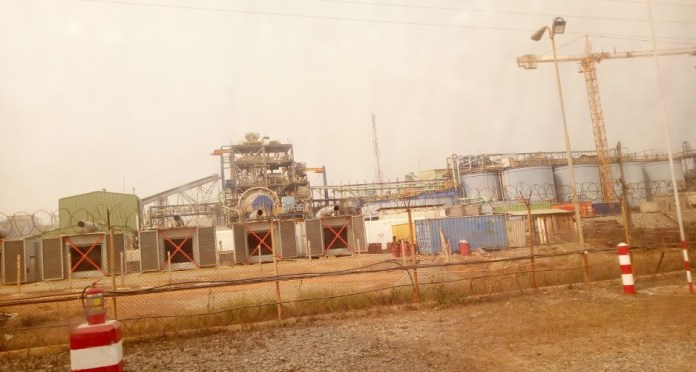 KINJOR, GRAND CAPE COUNTY – Musu Konneh recalls she became speechless for several minutes when she heard that Bea Mountain Mining Corporation intends to start underground mining for gold by 2022 in a stakeholder consultation conducted by the Environmental Protection Agency (EPA). Konneh’s clan was one of 322 families who relocated from their ancestral villages to give way to Liberia’s first and largest industrial goldmine in 2013.

From that time until now, a lot has happened in connection to the New Liberty Goldmine—resettlement rancor, pollution problems, and battles for benefits, just to name the major ones. Konneh and other residents are apprehensive that underground mining will have negative environmental and health impacts for New Kinjor, the shantytown to which she relocated, a stone’s throw away from gold-rich Kinjor.

Bea Mountain has concluded a feasibility study and an environmental social impact assessment (ESIA) of the underground mine in keeping with the Environmental Protection and Management Law of Liberia and the Minerals and Mining Law of 2000. However, the Ministry of Mines is yet to give the document the green light as its doors are closed due to the coronavirus pandemic.

If authorized, this will be Liberia’s first subterranean mine. The company wants underground access due to the depth of the mineral deposit, which would be too deep and costly to excavate via an open-pit operation.

The project will have side effects on the surroundings. The subterranean water level within wells of future affected communities will drop due to dewatering underground pits, according to the ESIA.

The company claims that would-be affected communities have nothing to fear, but people continue to panic, while experts have mixed views about the project.

The impact will be less disruptive than the open-pit mines that Bea Mountain currently operates, according to Catfish Brownell, technical manager of Petra Resources, an independent firm that conducted the ESIA for the project. “They will not cut trees and affect animals because they will be going underground,” he says.

Underground pits will cause more damage than open pits, contends Godwin Evenyo Dzekoto, a Ghanaian environmentalist and natural resource manager. “Underground mining is going to impact and pollute groundwaters,” he says.“There are some animal species that would be affected. Water will be polluted with chemicals and heavy metals.”

“I can assure you that the necessary measures will be put in place to ensure safety,” says Debar Allen, manager of Bea Mountain.

Some experts are critical of Bea Mountain’s ability to operate an underground mine. Its parent company, Avesoro Holdings — a privately-owned gold production, development, and exploration company — focuses on West Africa and Turkey. It was established in 2013 by Turkish billionaire Mehmet Nazif Günal and operates three surface goldmines: New Liberty, Kokoya in Bong County, and Yougain Burkina Faso. It has never run an underground mine before.

This form of mining is one of the most dangerous undertakings and can expose mineworkers and communities near mining sites to danger. In scientific terms, underground mining cannot cause an earthquake, although there is a very real danger of mine collapse.

“Bea Mountain must put into place safety measures against risks like an explosion and mine collapse,” says Dzekoto. “There should be sufficient safety kits, better use of technology, proper waste disposal, and reduction of water into pits.”

Former Minister of Mines and Energy, Dr. Eugene Shannon, shares Dzekoto’s concern. “There will have to be measures against by-products of exploration and combustion, and gases that can be trapped in pockets within the earth,” Shannon told the Daily Observer in a mobile phone interview. He investigated the 1982 No-Way Camp “landslide,” the worst mining disaster in Liberia’s history, in which 47 people were killed and 39 injured.

Residents of 12 affected communities near Bea Mountain’s 478-kilometer concession area, in the Gola Konneh district of Grand Cape Mount County, are uneasy that underground mining will further push them into poverty. They claim the company’s operations are already having adverse effects on their livelihoods.

Community-based artisanal mining ceased since Bea Mountain arrived in 2013. That same year, the company dumped cyanide in streams and creeks, used by locals for drinking water, and was fined by the EPA.  Farmers say the New Liberty Goldmine precipitates flooding in their communities, a claim Allen says the company is going to address.  A number of residential structures have crack marks as a result of mine exploration.

“The earth can be trembling when they start blasting up the mine,” says Musa Zoejawa, Kinjor’s youth leader. He points to a broken wall in his office he claims is a result of the bang. Zoejawa complains he and other residents have to endure noise pollution daily.

Noise does not seem likely to be a problem related to the proposed underground project. The closest residences to the company’s goldmine are 1.25 kilometers away, a good distance from the impact of mine-related explorations, according to the ESIA.

In exchange for access to the area, neighboring communities are supposed to be compensated. Yet Bea Mountain failed to honor a memorandum of understanding (MOU) it signed with local communities. It promised in that MOU to build schools, but it has not. Allen says the company has “financial constraints”. This shortfall compounds the fears of residents over any future project.

The Ministry of Mines and Energy was in the process of reviewing the company’s feasibility study and the project’s engineering technicalities before it closed due to the novel coronavirus pandemic.

“The company has made some presentations, and there are some still pending that cannot be scheduled due to the pandemic,” says Emmanuel Swen, assistant minister for mines. “We have a responsibility to ensure that the safety and wellbeing of project-affected people are given high priority during engagements with [Bea Mountain].”

Proponents of the underground mine say it would provide jobs and much-needed revenue for Liberia. Former chairman of the House of Representatives’ Committee on Lands, Mines, Natural Resources and Environment, R. Matenokay Tingban, urges the ministry to authorize the project to boost the economy.

Before the coronavirus pandemic, the Liberian economy was expected to grow 1.6 percent in 2020, after declining by 0.4 percent last year, according to the World Bank. This projection was largely based on recovery in the mining sector.

“Several billions of dollars will be infused into the economy,” Tingban says, suggesting that the project will put money in the pockets of Liberians. “Liberians are going to be trained, and there will be economic returns for the country. It will get royalties and its own share of the profits, while Bea Mountain will pay income and withholding taxes.”

Citizens of Kinjor remain skeptical. Locals will fight the project, even if the government authorizes it, says Dr. Edwin Zoedua, a presidential aspirant in the 2011 elections and resident of Kinjor. “We will resist any attempt to do underground mining here,” Zoedua says. “It is not going to bring employment. It will bring destruction.”