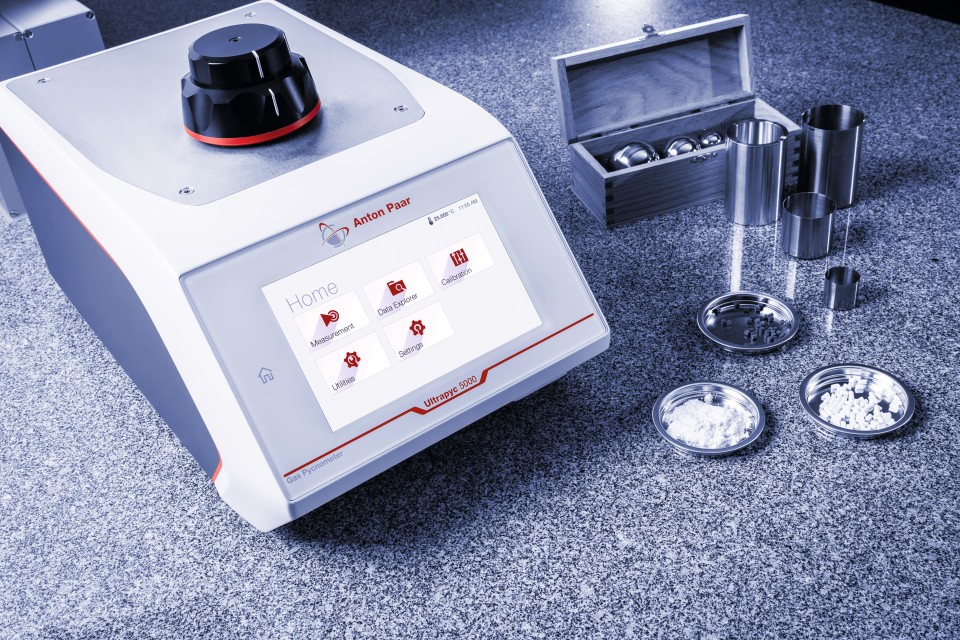 Slurries are used in a wide variety of applications from batteries, to cement and ceramics. The variety of industrial applications for different slurries necessitates a reliable method for evaluating the density of these unique mixtures. Accurate and repeatable density measurements including the percentage of solids in a slurry, can be performed using the Anton Paar Ultrapyc series of gas pycnometers.

Density is affected by the amount of solids suspended in the liquid. While gas pycnometry is best suited for solid skeletal density measurements, experimental parameters can be optimized for slurries and/or liquids that have some vapor pressure. To illustrate the use of the Ultrapyc 5000 for these types of measurements, the density of distilled water was measured, as water is often the liquid component of a slurry and its density is well-known for comparison purposes.

A high target pressure, short, fixed equilibration time, and short flow purge minimizes the effect of any vapor pressure from the sample. The Ultrapyc series PowderProtect feature for gas expansion allows the user to further minimize vapor pressure effects and obtain the most accurate liquid/slurry density measurement. Expansion (flow direction mode) from the reference chamber to the sample chamber should be utilized. The Ultrapyc 5000 was temperature controlled to 20 °C for the measurements.

Results for three repeat density measurements are shown in Table 1. The experiment was performed using both expansion directions. The chamber expansion is in excellent agreement with the known density of water at 20 °C, 0.9982 cm3/g.

If the individual densities of the solid and the liquid in a slurry are known or measured, the percentage of solids by mass can be calculated from the density of the slurry. To demonstrate this using water / clay, the density measurements on eight different slurries were analyzed using the settings recommended above. With the same instrument settings, the density of clay was found to be 2.6576 cm3/g and the density of water was found to be 0.9966 cm3/g. (See Table 2)

Table 2: Formulated and calculated % solids in slurries with measured densities

Excellent agreement was found between the formulated and calculated values. The basic requirement is that the density of the lighter component differs by at least 10% from the density of the heavier component–the greater the difference in density, the better the percent resolution. Extension of the concept can be applied to systems such as fillers or pigments in plastics, hydrous in anhydrous components, and solid in liquid. Liquid in liquid mixtures such as oil in emulsion can also be measured if vapor pressures are relatively low. 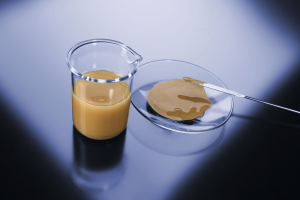