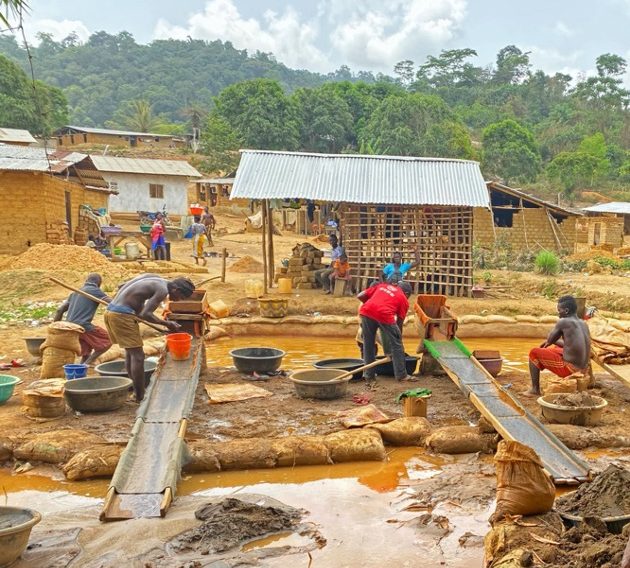 Amid pollution, disasters at mining sites

Artisanal and small-scale mining is the main source of income for more than 100,000 gold and diamond miners in Liberia.

Weak legal regulatory frameworks and limited institutional oversight contribute, however, to major revenue and income loss for both the Government of Liberia and artisanal miners, a release from the Environmental Protection Agency of Liberia (EPA) said.

According to the release, governance and regulation shortfalls have also contributed to widespread environmental pollution, human rights violations and mounting conflict and instability at mining sites across Liberia.

To mitigate challenges associated with artisanal and small-scale mining here and improve revenue and income generation from the mining sector, the Ministry of Mines and Energy (MME) in partnership with the EPA on Monday, December 28, 2020 held a one-day Technical Inception & Consultative Workshop in Kakata, Margibi County, on strengthening governance, human rights and environmental management for the artisanal mining sector.

The workshop, which attracted artisanal miners from across the country, representatives of civil society groups and line Ministries and Agencies, is being held to kick off the Environmental Governance Project funded by the United Nations Development Program (UNDP) in partnership with Swedish International Development Cooperation Agency (SIDA) under the Environmental Governance Programme (EGP).

It was also intended to develop an artisanal small-scale mining user-friendly handbook which would strengthen governance, human rights and environmental management for the artisanal mining sector in Liberia and as well create awareness on global environmental values.

The NAPs Project supports the Government of Liberia to advance its National Adaptation Plans process in the climate sensitive sectors.

This, according to Mr. Tumbey, will require developing the skills and capacities of small-scale miners and host communities so that they become knowledgeable of the enforceable regulations in place and the different roles of the regulatory agencies.

He disclosed that key challenges facing small-scale miners include limited knowledge about environmental and human rights protection laws; complex and often convoluted supply chains which often make the local miners susceptible to exploitation; limited knowledge among miners about the value and pricing of gold and diamonds and the existing regulations to ensure that commodities are produced and exported legally.

Professor Benjamin S. Karmorh, EPA chief technical advisor, said the overall objectives of the workshop was to support the development of a simple English training handbook for artisanal miners and communities where mining are taking place to provide them with much-needed skills and knowledge.

It will also empower miners to be aware of their rights, roles and responsibilities, and create a triple win system whereby the immense potential of artisanal small-scale mining sector to generate socio-economic benefits for miners, mining communities, and the Government of Liberia is harnessed.

For his part, Assistant Lands and Mines Minister, Johnson S. Willabo, disclosed that the ministry is revising the Mineral and Mining Law of 2000.

He indicated that the ministry is collaborating with FDA and EPA and has rolled out a number of measures to ensure that mining is done sustainably.

Assistant Minister Willabo said some of the measures include placing a ban on dredges, moratorium on the usage of heavy machines in Class C mining and the enforcement of the ban on the usage of mercury to recover gold.

He also disclosed that the ministry is seeking financial assistance for the promulgation of the framework for the mining regulations.