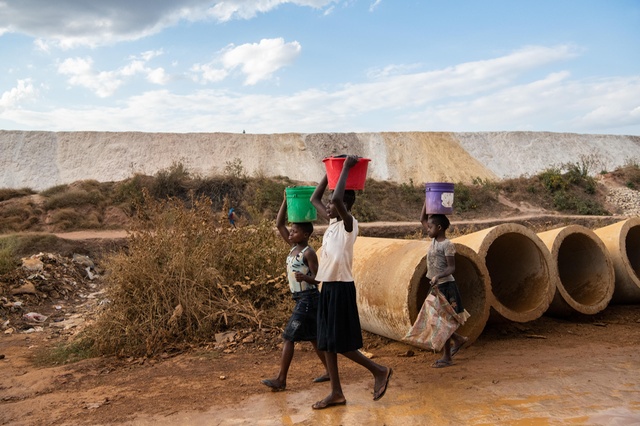 Swiss cobalt traders Glencore and Trafigura deal very differently with small-scale miners in the Democratic Republic of Congo (DRC), many of whom are children.

Eight kilograms of cobalt are needed for every electric car battery. More than 70% of the increasingly sought-after metal is mined in the southeast of the DRC. But most of the miners are not employed by mining companies. Some 250,000 Congolese, including many children, dig the cobalt-bearing rock with bare hands or with primitive tools at best.

As there are hardly any areas where small-scale miners can work legally, thousands of them are entering the concessions of large mine operators in the area surrounding the town of Kolwezi. Violence and fatal accidents happen often. In June 2019, more than 40 people died in a concession controlled by the Swiss mining giant Glencoreexternal link. Last December, US attorneys filed a class-action lawsuit against American tech companies on behalf of 13 Congolese families in Washington, DC court. The main accusation against Apple, Alphabet, Dell, Microsoft and Tesla is that they knowingly use cobalt obtained through “forced child labour”.

The lawsuit could reinforce commodity traders’ and tech companies’ trend towards completely avoiding cobalt from small-scale miners. Glencore, which dominates the global cobalt supply, is pursuing such a strategy in order to avoid being associated with child labour.

But various NGOs believe that this may only worsen the situation. “For the people in Kolwezi there are hardly any alternatives to mining,” says Emmanuel Umpula Nkumba, director of the Congolese organisation African Resources Watch (AfreWatch).

Chantal Peyer of the Swiss organisation Bread for All has been investigating the activities of commodity traders in the DRC for years. “Boycott is always a bad answer,” she says. “Companies that completely reject material from informal mines fail to meet their responsibilities.”

As a promising attempt to take on corporate responsibility, Peyer mentions a pilot project of Trafigura, the commodities trader with headquarters in Singapore and Geneva.

In 2018, Trafigura signed a three-year agreement to buy all the cobalt extracted by the mine operator Chemaf. The Dubai-controlled company runs the Mutoshi mine near Kolwezi. Trafigura was faced with the challenge of how to deal with the more than 5,000 informal miners – among them hundreds of children – working illegally in parts of the site. On average, every third day someone died because tunnels collapsed.

Under the pilot project, an area equivalent to 94 football fields (0.67 square kilometres) was fenced in, allowing access to thousands of adult members of a designated cooperative. The top layer of earth was removed with excavators to avoid dangerous tunnels. The workers were equipped with protective helmets and overalls; sanitary and medical facilities were put in place. The cooperative was obliged to sell all the cobalt to Chemaf at a periodically negotiated price.

At the end of 2019, Trafigura published a report on the pilot projectexternal link. The independent authors of the commissioned report criticise Chemaf’s suspension of some agreed services for economic reasons  – worn safety equipment had not been replaced and the workers had been paid late (within two to three weeks instead of every one or two days).

Yet in principle, the pilot project was found to be a good model for improving the working conditions of small-scale miners as they had benefited from safer and more productive working conditions. Everyone, but especially women, who make up about 40% of the workers, earned more than before, the report concludes – partly because they had lower costs for transport and health care.

Nkumba of AfreWatch disagrees. “The safety situation has improved, but there are neither economic nor social benefits for the workers,” he said, noting that the cooperative had strong ties to Chemaf and was not able to negotiate a fair price. “Chemaf makes a big profit.”

James Nicholson, head of corporate responsibility at Trafigura, finds Nkumba’s criticism unfair. “From an economic point of view, it is logical that Chemaf pays the cooperative a price that is slightly lower than that in the local market,” he reckons. “Ultimately, Chemaf has invested a lot of money in promoting the safety, health and wellbeing of the workers.” For Nicholson, it is a win-win situation, rendering the model socially and economically sustainable.

Thanks to the project, child labour was eliminated on the Mutoshi site, and parents were able to care for their children more often due to shorter working days, according to the report. However, because the world market price for cobalt fell sharply in the meantime, some parents in the project were no longer able to pay school fees.

Complicating matters, due to the Covid-19 epidemic, Chemaf decided to temporarily shut down the Mutoshi mine, including the semi-mechanised site for the informal miners.external link Whether the project would continue was in doubt even before the pandemic. “The decision lies with Chemaf,” according to Nicholson. Would Trafigura renew the agreement with Chemaf if the mining operator definitely cancelled the project? There was no comment on this from Geneva.

According to Peyer from Bread for All, “Trafigura at least tries to do the right thing and invests in a sustainable supply chain.” But she too insists that the small-scale miners at the Mutoshi mine should receive the usual market price.

The international NGO Pact, which oversees the project on behalf of Trafigura, believes there is a lot of potential in its approach.

“Around the world, almost 40 million people depend on artisanal and small-scale mining. This is a fact of life that more and more processor companies of cobalt and other minerals are recognising,” says Stephanie Shumsky, technical manager for Pact’s “Mines to Markets” programme. “Some buyers are willing to accept such material if it has been sourced responsibly and safely.”

Shumsky adds that “other large mining companies” are interested in testing the “Mutoshi model” themselves.

Glencore is not among them. Anna Krutikov, Head of Sustainable Development at the Glencore headquarters in Zug, makes this clear: “We don’t buy or process any materials that come from artisanal mining. As an industrial miner, we can keep our supply chain free of risks of child labour or poor working conditions. However, we do not ignore the issue of artisanal mining in the country.”

Krutikov highlights that artisanal mining is a complex challenge that requires collaboration with various stakeholders. To better manage the risks, Glencore is working with local authorities and various organisations, as well as partners along the supply chain. With around 15,000 mostly local staff, the company is one of the most important employers and taxpayers in the southeastern DRC. Despite the Covid-19 pandemic, Glencore’s operations in the area continue unabated.

“Nobody should have to work in an artisanal mine where life is at risk,” said Krutikov. “That’s why we work with over 140 local cooperatives, with more than 4,000 members in total, to drive economic diversification so that people have an alternative to artisanal mining and can build a sustainable livelihood in, say, agriculture.”

In addition, Glencore, together with an international NGO and local churches, launched a leisure programme for schoolchildren in 2016. “In 2018, we reached over 9,000 children and their parents through our school holiday camps,” said Krutikov. “The children received meals and school materials; the recreational and educational activities included discussions on children’s rights, the importance of education and the risks associated with artisanal mining.” Glencore expects to report more children taking part in 2019 and 2020.

But Chantal Peyer of Bread for All is not convinced by their approach.
“Glencore should actually know that there are currently hardly any alternatives to artisanal mining – after all, locals are repeatedly entering their mines, too,” she says. Peyer welcomes any support for other sources of income but considers Glencore’s projects to be “marginal and isolated”.

Emmanuel Nkumba of Afrewatch notes that “Many parents do not even manage to raise the school fees. So how is a holiday camp supposed to bring children out of the mines into schools?”

According to Peyer and Nkumba, it would be best if mine operators such as Glencore or Chemaf handed over to the general public those areas that are no longer suitable for industrial mining. However, the Congolese state would then also have to assume much more responsibility – especially since a new mining code has increased the amount of royalties and tax money at its disposal. Both Peyer and Nkumba say the government is still doing too little to provide suitable land for small-scale miners or to diversify the regional economy.

Kwale based mining company Base Titanium has so far contributed KSh 80 million (USD 800,000) in various initiatives to support efforts to fight COVID -19 in Kenya.