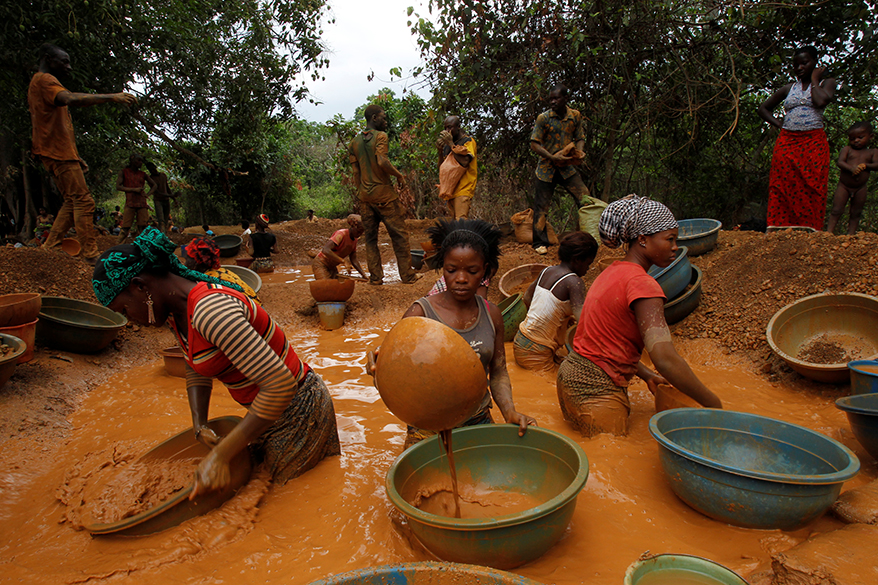 After being exploited by middlemen for decades, Kenya’s subsistence gold miners are applauding a refinery that will help regulate the sector and eliminate the black market that the middlemen use to exploit them

It rained in the night, but that did little to eliminate the dust now floating inside the makeshift gold processing plant at Musali village in Kakamega, western Kenya, on this chilly morning. The sun casts a faint yellow light through the clouds as they slowly disperse. “It will rain again today,” blurts out a man cleaning a black galvanised basin – an unsolicited weather forecast.

Several men are busy hoisting another out of the mineshaft. The exit is hardly wider than the man himself. He has come out astride a bucket connected to the line of a hand-driven, overhead hoist. Nearby, another group of men and women are pounding away at what looks like muddy soil, in their quest for gold.

Josephat Mutambo, 61, has been working as an artisanal gold miner in one of these plants at the Ikolomani gold mines since 2002. He ventured into the trade at the age of 30, after spending ten years at the coast – in Mombasa and Lamu – doing menial jobs.

Complete the form and download, for free, the highlights from The Africa Report’s Exclusive Ranking of Africa’s top 200 banks from last year. Get your free PDF by completing the following form

On this day, Mutambo, clad in shabby clothes, is working with a dozen young men at a makeshift gold “refinery plant” where they are busy cleaning gold ore.

After cleaning the ore of mud and dust, they crush it into small pieces and leave it in the sun to dry before taking it for milling in an improvised grinder. The sound of the grinder this morning is deafening.

“Gold mining is our main economic activity in this region and our livelihood largely depends on this trade which has enabled us to put food on the table and also take our children to school,” explains Mutambo, adding that despite making significant sums, the mining sector has remained informal for the nine decades since the discovery of gold in Kakamega, in 1932.

“We are over 90,000 artisanal gold miners along the Lirhanda corridor but we use outdated and rudimentary tools in the extraction of gold and this has made it difficult for us to get high-quality gold from the gold mining fields and make huge profits.”

Patrick Makhule, 38, who has been in the gold mining business for the last 15 years, decried the exploitation of miners by middlemen who buy their gold and sell it again, often on the black market, making huge profits.

“The middlemen pay us between $10 to $25 per gram and then sell it in European markets and Middle East… If we had a direct market devoid of the middlemen, we would be getting good proceeds from the venture,” said Makhule.

But there’s light at the end of the tunnel. The government has started constructing a refinery plant in a ten-acre piece of land at Lidambitsa village, in Kakamega, in a partnership with H-Nuo Company Limited, a Chinese company that provides services to the gold mining industry.

The development is expected to bring more structure to the sector and ensure that gold mining activities are regulated to the benefit of the locals. There is hope that this might see miners secure prices closer to the current $58 per gram international price of gold.

“We have had over ten public participation forums, with both the county and the national government where we gave the nod for the establishment of the gold refinery plant,” said Makhule who doubles up as the Secretary-General of the Kakamega County Artisanal and Small–Scale Miners Association.

Acacia Mining, a British company that carried out gold exploration in Kakamega in 2013, subsequently announced estimated deposits of some 1.31 million ounces of gold deposits – valued at $1.7bn – along the Lirhanda Corridor, that stretches between Kakamega, Vihiga, Siaya, Busia and Kisumu counties in Kenya.

Two months ago, Shanta Gold, an East Africa based gold producer and explorer announced the discovery of gold deposits estimated to be worth $2bn, along the Kakamega – Busia gold belt, which covers at least 1,160 square kilometres.

“During the exploration exercise, we detected high-grade gold in 13 gold mines we drilled in June this year that were between 200 – 450 metres deep at Bushiangala and Isulu areas in Ikolomani. If the metals are harnessed, the revenues from it will spur the region’s economic growth,” said Zurrin Eric, the Shanta Gold Chief Executive Officer (CEO).

Already, the county government of Kakamega has signed a memorandum of understanding with the national government through the Ministry of Mining and handed over the title deeds for the land at Lidambitsa, where the refinery plant is being put up.

“The Kakamega Gold Refinery Plant is being constructed at a cost of Sh100m and sits on a ten-acre piece of land. The gold refinery project was long overdue and will transform the lives of the area residents who have largely depended on subsistence farming,” said Kakamega Governor Wycliffe Oparanya.

“From the 30% gold revenue Kakamega will get, 20% will be given back to the community whose land has gold deposits (artisanal gold miners) and 10% will be used to fund the county annual budget. The other 70% will be shared between the investor and the national government on a 50% and 20% basis,” Oparanya said.

Kenya’s Mining Cabinet Secretary John Munyes has said that artisanal gold miners will undergo safety training under the sponsorship of the national government.

Despite Kakamega’s clearly buoyant artisanal gold mining sector, Kenya has yet to develop a large-scale, commercial gold mine. Much of the country has gone unexplored since the colonial era when British geologists announced there were no deposits worth exploiting. However, exploration has improved exponentially since that period and neighbouring Tanzania now has a number of major gold mines run by multinational mining companies.