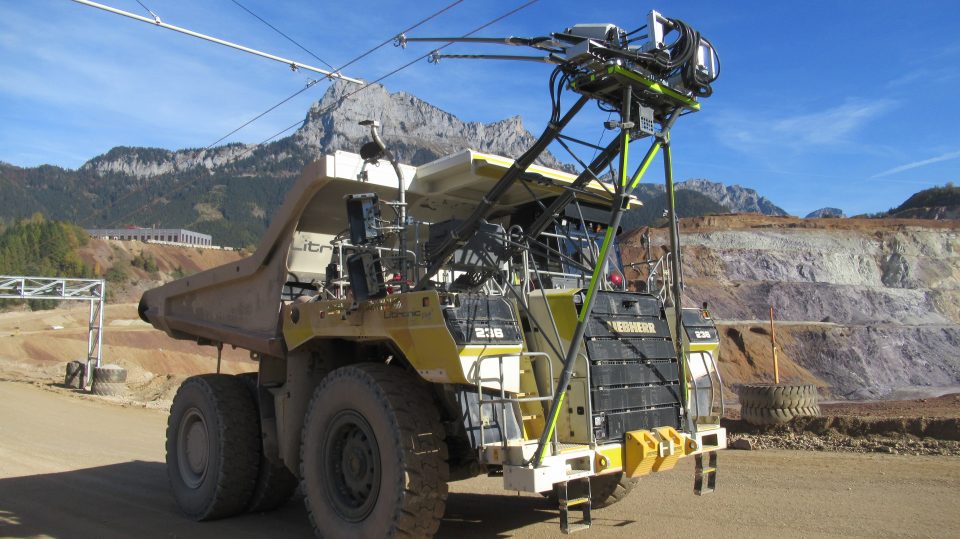 At Bauma 2019, VA Erzberg and Liebherr have concluded a development contract for a Trolley assist system for the T 236 (100t mining truck). Since then the iron ore mine has been testing the diesel-electric truck in Austria. The truck was modified to operate with an overhead line connected through a current collector with bars on a 500 m long test track. The groundbreaking ceremony for the extended 5 km trolley line took place on September 29, 2020. 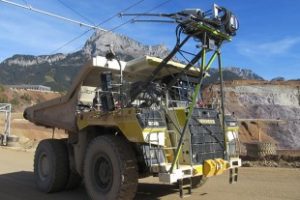 VA Erzberg stated: “Up to now, the transport of more than 13 Mt of rock per year has required enormous amounts of energy of around 4.5 million liters of diesel per year. It will be three million liters less diesel in the future when the successors to the mechanical diesel trucks currently in use start operating at Erzberg.”

Since signing the development contract for the trolley system at Bauma 2019, VA Erzberg has been testing the modified T 236 diesel-electric truck in its siderite iron ore mine in Eisenerz, Austria. The tests were conducted on a 500 m long test segment.

This is the way it works: The diesel-electric truck is equipped with a current collector with bars that connect the truck drive system to the overhead power lines on uphill haulage segments to drive with electric power. This innovative technology allows for tracks with small radiuses and even switchbacks. It also allows for a wider use of the haul road width aside of the catenary line in comparison with conventional pantograph solutions. This is of importance when the haul road conditions are not optimal due to weather conditions for example.

Josef Pappenreiter, Technical Director of VA Erzberg says, “There are only a few companies in the world that use overhead line technology for their trucks. However, we realized very quickly that the existing technology would not work for us. Our newly developed technology is different from everything previously available on the market in terms of both the overhead line system and the vehicle technology itself. This could only be developed with our cooperative and innovative partner Liebherr Mining in Colmar.” 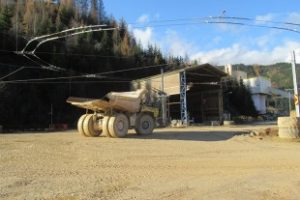 The new extended track for a fleet of six Liebherr T 236 will have a length of 5 km with the upper section at around 1,055 m above the sea level.

VA Erzberg will be observing how the weather conditions will affect the overhead lines during the winter in the Eisenerz Alps. Peter Schimek, Project Manager at the mine added: “Another challenge is the entire electrical engineering as all six T 236 can be connected to the overhead lines simultaneously in several places”.

When connected to the overhead power lines in trolley mode, the full power capacity of the electric wheel motors of the T 236 can be translated into speed on grade while the diesel engine idles, thus reducing emissions and fuel consumption.

In the long term, VA Erzberg expects to save around three million liters of diesel and 4,200 t of CO₂ per year. Furthermore, the emission of nitrogen oxides and fine dust will also be reduced.

Josef Pappenreiter comments: “With this technology […] we expect a sustainable energy-optimized production. Around 13 million tons of rock are currently transported in the mine every year. The cost factor for ore production is correspondingly high. In addition to the positive environmental effects, an investment in this new technology also secures the sustainable extraction of the important raw material iron ore for domestic steel production. […] A total of around 20 million euros will be invested in the project.”

The Liebherr Group is a family-run technology company with a highly diversified product portfolio. The company is not only one of the largest construction equipment manufacturers in the world, but also provides high-quality and user-oriented products and services in a wide range of other areas. The Liebherr Group includes over 140 companies across all continents, employs more than 48,000 staff and in 2019 achieved combined revenues of over 11.7 billion euros. Since its foundation in 1949 in Kirchdorf an der Iller in Southern Germany, Liebherr has been pursuing the goal of achieving continuous technological innovation, and bringing industry-leading solutions to its customers.