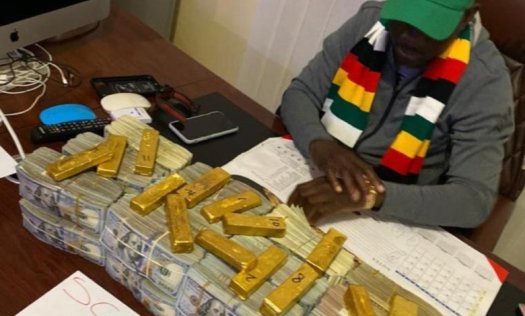 By A Correspondent- Pedzisai Scott Sakupwanya, a dealer considered close to the first family, has been kicked out of a gold mining venture in Penhalonga, Manicaland province.
Sakupwanya’s Better Brands company had been allocated 132 gold claims at Redwing Ming Company (RMC) under hazy circumstances.

Rival miners, the surrounding community and local advocacy groups were accusing Sakupwanya of having become the law unto himself by terrorising competitors and defying the police for causing extensive environmental damage at Redwing.
They reported that the gold miner claimed that the mining concessions he was running in Penhalonga belonged to President Mnangagwa.
Sakupwanya is a prominent member of the Affirmative Action Group, which is considered an elitist club of ruling ZANU PF sympathisers disguised as beneficiaries of black empowerment.
In early October, Information for Development Trust (IDT), working in collaboration with The Standard newspaper, reached out to Charamba over Sakupwanya’s alleged abuse of the president’s name and he threatened that namedroppers would “rot in jail”.

There has been a serious level of name-dropping by people who are trying to ride rough-shod over the law in the name of the leadership. We take a very dim view of such personalities and in the event that we catch up with them, those guys will rot in jail.
Tell that Sakupwanya that, really, he must look at his articles of association and see if the president is a shareholder (in Betterbrands).
A follow-up by Grazers News, the IDT online publication, established that the caretaker management at Redwing had resolved to stop Better Brands from operating at the goldfields.

In a letter dated 29 November 2021 that was addressed to Better Brands, Knowledge Hofisi, the Redwing interim corporate rescue manager, said he had replaced Sakupwanya’s company.
Duatlet Investments is now set to partner with Redwing, a subsidiary of Metallon Corporation that is domiciled in the UK. Part of the letter reads:
Accordingly, any and all mining activities that are being carried out by Better Brands Mining Company have been suspended and suppressed by the new arrangement and should therefore stop by end of business today. In other words they should immediately vacate RMC premises.
The local community also accused Sakupwanya of fuelling criminal cases in the area after he hired artisanal miners from Kwekwe to boost his operations.
The artisanal miners, commonly known as Mashurugwi, allegedly beat up rivals and went on a stealing spree in the area.