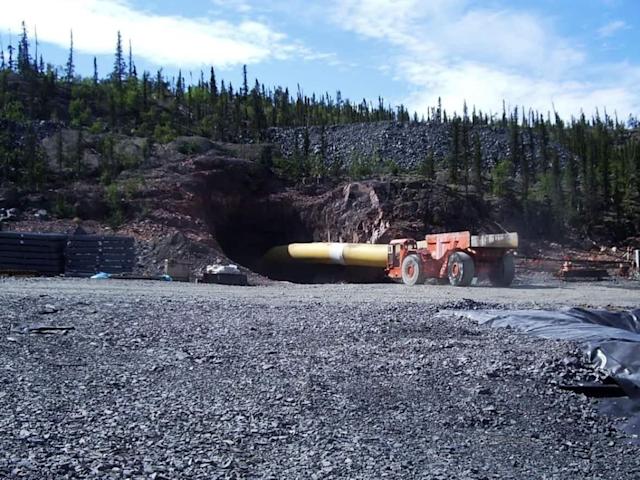 Two mining projects in the Northwest Territories looking to cash in on the growing demand for batteries that are key in the battle against climate change are inching forward.

Robin Goad, the president and CEO of Fortune Minerals, the company that owns the NICO project — a cobalt, bismuth, gold and copper deposit about 50 kilometres northeast of Whatì — gave an update on the project during a virtual appearance at a geoscience conference held in Yellowknife Thursday.

A new all-season road set to officially open on Tuesday is already making the NICO project more accessible, he said.

The 97-kilometre Tłı̨chǫ Highway will mean the community of Whatì, which was previously only accessible via an ice road for several months of the year, will now be accessible year-round.

Goad called the road “a key enabler” for NICO. The company has already been helicoptering materials from the end of the road to the project site.

“It allows us now to eliminate building an airstrip. A lot of facilities are now redundant, we can eliminate those saving capital costs,” he said.

The company is also planning to construct a 50-kilometre spur road to the mine, which will allow it to truck material to Enterprise or Hay River and then transport it by rail to a yet-to-be announced refinery site in southern Canada.

Plans for a refinery in Saskatchewan were shot down, but Goad said the company identified “superior sites,” most of them in northern Alberta, and an announcement was expected soon.

Cobalt is an essential part of electric car batteries and labelled a critical mineral by the government of Canada.

More then 70 per cent of cobalt is produced in the Democratic Republic of Congo (DRC), and more than half of that is controlled by Chinese state-owned enterprises, Goad said — and there has been a lot of interest to have a non-DRC source of cobalt.

Prairie Creek looks to be in production in 2024

An update on another potential critical mineral project that’s long been in the pipeline in the Northwest Territories was provided Thursday.

Rohan Hazelton, the president, CEO and director of NorZinc Ltd., the company behind the Prairie Creek Project — an advanced-stage zinc, lead and silver project located in Nahanni Park —  said it’s looking to bring the mine into production within three years, “by the end of 2024.”

The key to the schedule, Hazelton said, is the construction of a 180-kilometre access road, which is to be built over “three winters and two summer campaigns.”

An initial winter road is expected to be built this winter, which will allow the company to do the final studies on an all-season road, Hazelton said.

Hazelton expects about 600 workers on-site in the years during construction, and around 300 to 350 people once the mine is operational.

Zinc is also listed as a critical mineral in Canada, and was recently added to a draft list of critical minerals in the United States. New zinc battery technology shows promise as a cheaper alternative to lithium batteries to store renewable energy like wind or solar.

N.W.T. Premier Caroline Cochrane also spoke at the conference Thursday and said the federal government needs to support the territories’ hydro energy projects and roads, not just for the mines.

“Roads to resources is one argument that we used before,” she said. “But I’m using roads to communities and roads to opportunities now because … we need to connect people to people. We need to have hydro to get people off of the diesel, but we also need to have employment opportunities for people.

“And it’s really hard to do that if you can’t, even if everything you do, you have to get on a plane.”