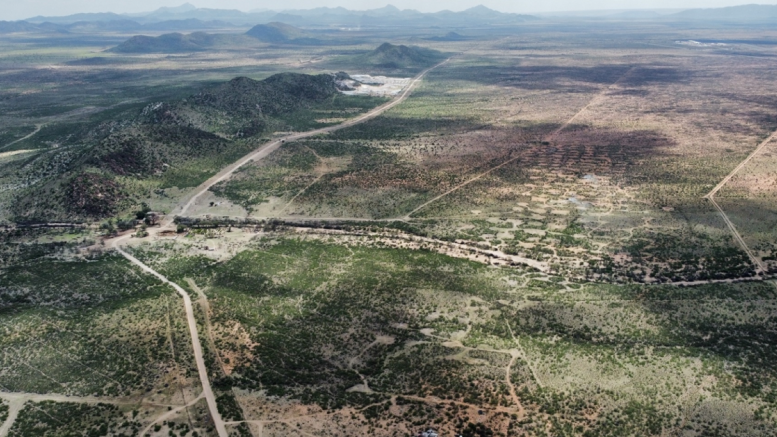 Since its discovery in 2019, Twin Hills already has a sizeable mineral resource, which is likely to grow as the company continues to explore its 6,577 sq.-km land position, he says. “Only a year-and-a-half after being discovered, the project has reached nearly two million gold ounces in resources, which is the threshold for a respectable tier-two mining operation.”

Daun and the company’s president and co-founder Alan Friedman already have a proven track record of developing projects in the southern African country. As co-founders of Auryx Gold, they successfully developed the Otjikoto gold project, which, in 2012, was sold to B2Gold (TSX: BTO; NYSE: BTG) for $180 million. The Otjikoto gold mine produced 168,041 oz. of gold in 2020.

“B2Gold built Otjikoto into a very successful gold mine and is very much a model for the development of Twin Hills, which is likely to follow a very similar growth trajectory,” says Daun.

The rapidly developing Twin Hills is book-ended by two established Namibian gold producers. Otjikoto, about 250 km to the northeast, and the Navachab gold mine, 20 km to the southwest, which is the largest gold deposit in southern Africa outside of the Witwatersrand Basin in South Africa. Owned by the private equity firm QKR Namibia, Navachab has been in continuous production for over 30 years, with an average annual production of 80,000 ounces.

All three gold projects are sedimentary-hosted, structurally controlled gold deposits that form part of the Damara orogenic gold belt. Gold projects in these geologic settings tend to occur as clusters rather than in isolation, explains Daun. “They are usually very consistent, high-tonnage, and lower-grade deposits that can grow considerably over time.”

Twin Hills also benefits from existing infrastructure, including paved roads, power, and water supply, all within a 20 km radius of the project. There are also two towns within a half-an-hour drive, so “we don’t need to build a camp,” he notes.

Namibia is also a mining-friendly jurisdiction and one of the continent’s most politically and socially stable countries, with an established mining regime that has remained largely unchanged for over 20 years.

As a native Namibian, Daun is very familiar with the regulatory system, which, he says, is a significant advantage for the company as they look to advance the project from discovery to construction and production.

“The project also has a flat topography, it’s dry, and there are no communities on the land,” he adds. “Ultimately, we are hoping to acquire the surface rights on the project as well, which will significantly de-risk the project advancement. You’d struggle to find a project as well located as this.”

Twin Hills, however, initially presented a significant challenge to the company, he noted. The project was covered by about five to 15 metres of sand and calcrete, making exploration particularly challenging.

To overcome this, Osino looked to Western Australia, where mining companies had developed techniques for successfully exploring through cover in arid environments like that encountered in Namibia.

The technique, Daun explains, relies on the evaporation of groundwater that, as it percolates upwards, carries minute quantities of gold that precipitate out near the surface. An assaying method developed in Australia allowed these minute quantities to be analysed, providing Osino with a conceptual exploration model for the property.

Multiple rounds of follow-up drilling by the company resulted in the Twin Hills discovery in August 2019.

“The drilling returned some amazing intercepts of up to 250 metres with average grades running at about 0.7 grams per tonne; this is a very large orebody,” Daun says.

This year, Osino plans to conduct 75,000 metres of drilling focused on new discoveries and resource definition and growth.

The company has already completed 35,000 metres so far this year and currently has nine drill rigs turning on the property.

It also plans to conduct an airborne electromagnetic survey covering 110 sq.-km of the larger Karibib basin and mineralised trends, including the area around Twin Hills.

“The exploration program is completely geared towards de-risking and growth to make the project bigger and better,” says Daun.

At the same time, Osino is working on a preliminary economic assessment for Twin Hills. The study is slated for completion within the next couple of months.

The company currently has around $15 million in the treasury, which, says Daun, “will fund activities to the end of the year and allow us to conclude all our technical programs.”

The company then plans to acquire the surface rights to the project, commence the permitting process, and complete a definitive feasibility study in the first half of next year, with the construction of the mine expected to start late in the second half of 2022.

Major shareholders in Osino include the Canadian mining tycoon Ross Beaty, who holds a 12% interest; the company’s founders and associates, who own 13%; and Resource Capital Funds has 8%.