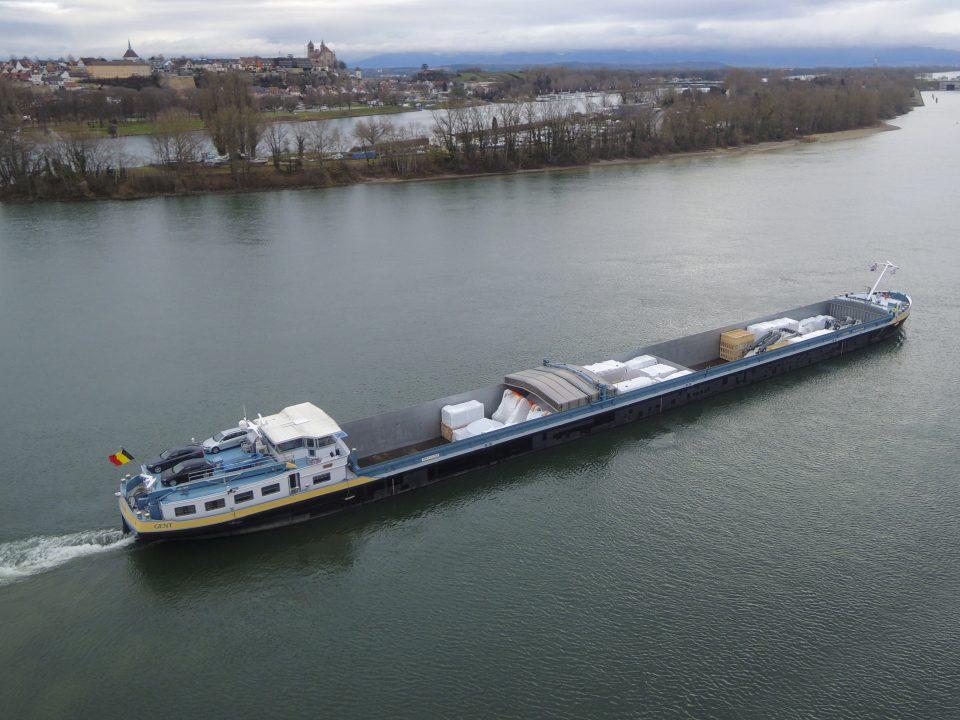 Each year, about 1,000 so-called “exceptional” trucks were needed to transport the mining machines assembled by Liebherr-Mining Equipment Colmar SAS to the Belgian seaports to join mine sites around the world (Australia, Africa, Asia etc.).

In June 2019, the company challenged itself to shift the pre-haulage to the seaports from road ro river.

After these 18 months of experimentation, the ecological and economical results are very positive for Liebherr-Mining Equipment Colmar and the company decided to pursue its efforts.

Colmar (France), January 25, 2021 – Before starting this project, Liebherr-Mining conducted an in-depth study on the modal shift, 50% financed by Voies Navigables de France (VNF – Inland waterway association) Strasbourg and with the help of an international consulting company. This funding is part of PARM (assistance plan for modal shifts) piloted by VNF and intended to support companies wishing to move to river transport.

At the end of this study, Liebherr-Mining Equipment Colmar decided to experiment this modal shift for its pre-haulage.

Established in Colmar for almost 60 years, the company decided to contribute to the development and competitiveness of the region by working with local actors. Thus, the pre-haulage from the factory to the Rhine port was entrusted to the two Alsatian carriers Straumann (Colmar) and Wack (Obernai and Drulingen) who are experienced in the region. The barging company is Haeger & Schmidt Logistics.

In addition, this modal shift will optimize public tools at the Rhine Port of Colmar / Neuf-Brisach and use the nearby Rhine.

One of the first positive aspects of river transport is the reduction of the environmental footprint.

For the same amount of goods transported, a barge will consume three to four times less energy than a truck and emit up to five times less CO2.

By reducing road traffic, noise pollution is also reduced because river transport is the quietest mode of transport.

A more economical and safer mode of transport

River transportation also has numerous economical advantages. With an almost zero accident rate, the river is also a safe mode of transport: the absence of traffic saturation and the presence of loading software guarantee the perfect stability of the boats.

In terms of deadlines, a machine ready for dispatch on Friday morning can be at the seaport (Antwerp or Zeebrugge) on Monday morning. A major advantage over road transport because a barge even navigates on Sundays.

For many types of goods, if the flow is industrialized and if the company commits to a forecast volume, river transport is also a less expensive solution. Indeed, Liebherr in Colmar was able to save money thanks to river transport.

This pre-haulage strategy initiated by the mining division has opened up a new path in the Liebherr Group. Other factories in the Group are now studying the possibility of following the same path.

The Liebherr Group is a family-run technology company with a highly diversified product portfolio. The company is not only one of the largest construction equipment manufacturers in the world, but also provides high-quality and user-oriented products and services in a wide range of other areas. The Liebherr Group includes over 140 companies across all continents, employs more than 48,000 staff and in 2019 achieved combined revenues of over 11.7 billion euros. Since its foundation in 1949 in Kirchdorf an der Iller in Southern Germany, Liebherr has been pursuing the goal of achieving continuous technological innovation, and bringing industry-leading solutions to its customers.Images

Rwanda’s tax revenue set to drop to $1.5b