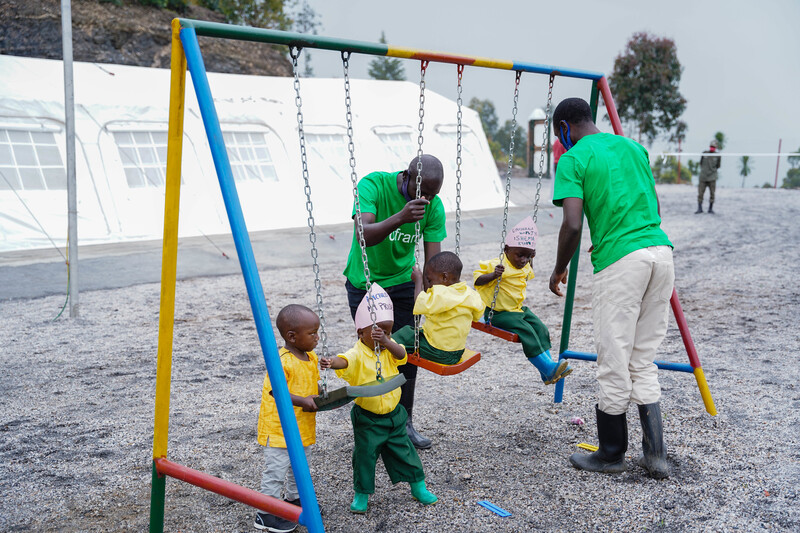 “Childcare is one less thing to worry about when I am inside that tunnel,” says 39-year-old Thacienne Nakabonye, pointing at the marked entrance of a Wolfram quarry on a hill overlooking a nearby steep valley.

Nakabonye is one of the scores of miners who spend most of the daytime beneath the rolling hills of Burera District, trying to eke out a living.

She is a casual worker with one of the companies subcontracted by Wolfram Mining and Processing Ltd in Gifurwe, a remote tungsten deposit in northern Rwanda.

“Nowadays when I am inside there my heart is at peace, all my focus is on extracting as much as I can get,” she says, her lively two-year-old daughter playing with her peers close by. “In a good month you can even make up to Rwf100, 000.”

Her daughter is one of the 26 children who are attending an Early Childhood Development (ECD) centre owned by the Wolfram Mining and Processing Ltd.

“Just knowing that your child is safe and feeding well, that they’re playing and have a place to sleep when they are tired gives you motivation to concentrate on your work.”

A caregiver helps a child to sleep at Early Childhood Development Centre at Gifurwe in Burera District.

Yet, this was not always the case, she observes. “It was a different situation with my three older children. We didn’t have this childcare centre and, therefore, you had to improvise, if there was no one to stay with your baby you’d be forced to skip work and that meant zero earnings.”

This is one of the two ECD centres (the other one is run by New Bugarama Mining Company – also in Burera) which were officially launched last week in what is seen as a groundbreaking move in the country’s mining sector.

The inauguration of the centres, one with capacity of 75 children (Wolfram) and the other 60, was the result of combined efforts from different stakeholders, including the Rwanda Extractive Workers Union, UNICEF, the Rwandan government and mining companies.

In both cases, those behind these childcare centres say they’ll also take in children of other members of the surrounding communities who don’t work with the mining companies.

For MarieRose Mukanyandwi, from Nkoto village, Mucaca cell, Rugendabari Sector, the ECD at Gifurwe is more than just a safe place for little children aged 3 months to 3 years. “They give them a balanced diet and this keeps malnutrition at bay,” says Mukanyandwi, who works as a clerk for one of the firms subcontracted by Wolfram.

“I have never been happier in my 10 years working here,” adds the mother of three, whose youngest child is attending the ECD centre. “We are not charged for bringing our children here, not even deductions from our salaries.”

Parents drop their children off as early as 6am and pick them up at 5p.m.

The centre is divided into sections based on the age of the children, including three who are under one year of age. When we arrived at the site, three infants lay asleep on mattresses inside a spacious white tent emblazoned with UNICEF logo.

At the other end of the compound there is a structured classroom block, with three rooms, labelled ‘baby’, ‘middle’ and ‘top’.

In-between is another structure with two rooms, a kitchen and a storeroom.

There are also decent bathrooms and toilets.

Julianna Lindsey, the UNICEF Country Representative in Rwanda, engages a child at the newly launched ECD centre at Gifurwe in Burera District on March 18.

Inside the classrooms, it’s an ideal learning environment for little children. There are small chairs and tables, toys, elementary jigsaw puzzles, brightly-coloured charts, baby block letters and numbers, animal and basic shape drawings, among others.

Outside, there are children’s play facilities and child-friendly open spaces.

Some 50 metres away from the fenced compound lies a kraal with two adult Frisian cows and a calf. “That’s where they get milk for the children,” a security guard tells The New Times.

“I measure their weight and height every month,” she says as she judiciously places one of them on a spring scale to measure his weight.

“This is an integrated childcare programme,” Uwumuremyi says, citing social protection, education, play and nutrition among other benefits.

Marie-Rose Mukanyandwi, a mine worker feeding her daughter at the ECD.

“Although the situation in Rwanda has not been that bad, the rollout of childcare services in the mining sector is going to make a huge difference,” says André Mutsindashyaka, the secretary-general of Rwanda Extractive Industry Workers Union.

“Women constitute only 11 per cent of the workers in the mining sector and childcare has been one of the major factors undermining their participation,” he said Thursday, March 24. “Employer-supported childcare services will definitely go a long way toward improving the situation.”

One of the cows belonging to the ECD, which is run by Wolfram Mining and Processing Ltd.

He added: “Evidence has shown that income made by women directly benefits their families and, therefore, this is good for future generations as well.”

“We hope other mining companies will follow suit,” he said, adding that the union will also be involved in assessing the performance of such centres.

Yet, employer-supported childcare does not only benefit employees and their children and family but employers as well, says Rajat Madhok, Chief of Communication, Advocacy and Partnerships at UNICEF Rwanda, citing a business case on the matter published in October last year.

The business case was the result of a study into the concept and performance of employer-supported childcare in Rwanda, with a focus on the tea sector.

Backed by UNICEF, UK Aid and the National Agriculture Export Board (NAEB), the study found that employer-supported childcare services “go far beyond a corporate social responsibility optics endeavour to making a seminal difference in a company’s bottom line”.

Thacienne Nakabonye, a miner, with her child at the centre.

Underscoring that employer-supported childcare had led to increased productivity of women tea pluckers in recent years, the report says the initiative contributed to increased Mata and Rutsiro (tea companies)’s revenues by US$ 9,326 and US$34,081, respectively, in 2019.

In addition, the impact of access to early childcare services or lack thereof can last a lifetime, experts say.

According to UNICEF, access to good-quality care and education programmes outside the home “are important in providing children with the basic cognitive and language skills they need to flourish in school.”

Unsafe conditions, negative interactions and lack of educational opportunities during the early years (0-8) can lead to irreversible outcomes, which can affect a child’s potential for the remainder of their life, it notes.

Yvonne Uwumuremyi, a community health worker, shares health tips with some of the women who have children at the centre.

Some studies have also shown that the human brain forms new connections at an astounding rate between the ages of zero to three years – at more than one million every second, a pace never repeated in life again, according to Harvard University’s Centre on the Developing Child.

By age 5, 90 per cent of the brain is fully formed, before many children have ever set foot in formal school, one study shows.

And, for a child in a low- or middle-income country, quality early development can boost their income by a full 25 per cent, the equivalent of moving up an entire social class, according to UNICEF.

Yet, figures have shown that as many as 250 million children aged 0-5 years in low-income and middle-income countries are at risk of not reaching their developmental potential as a result of lack of quality early childcare.

“If children are not supported in these critical formative years, they are unlikely to become fully productive adults,” the agency warns.

Yvonne Uwumuremyi, a community health worker, weighs an infant at the centre.

For Rwanda’s mining sector, the recent developments represent “an exciting new chapter,” according to Amb. Yamina Karitanyi, the chief executive, Rwanda Mines, Petroleum and Gas Board.

“It’s something we are celebrating,” she said, referring to last week’s milestone. “The more you care for your employees the higher the return.”

She added: “It’s an exciting moment… if we continue to work together as a sector, by taking good care of workers, protecting the environment and embracing standards, we’ll go far together.”

That’s a message that resonates with Nakabonye and her colleagues who each morning ‘disappear’ into the hillside tunnels of Gifurwe in search of livelihoods.

For the mother-of-four, the ECD centre presents her an opportunity to work harder for her family.

“My colleagues and I have no excuse for not working our socks off because our little children are now in safe hands.”

Research for this article was done with UNICEF support.