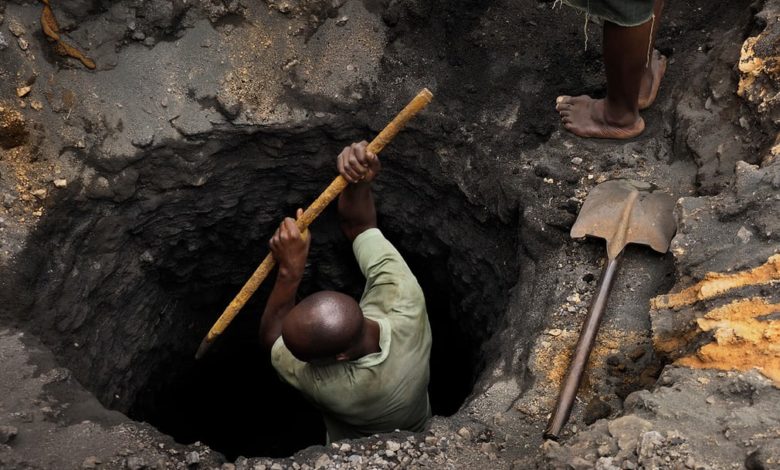 THE Minister of Mines and Steel Development, Arc Olamilekan Adegbite, weekend, assured artisanal and small scale miners of accessing loan facilities up to N100 million to boost their productivity.

Adegbite made this known during his inspection of the ongoing construction of Gemstones Market in Ojoo, Akinyele Local Government Area of Oyo State, where he urged miners to form cooperative groups that would qualify and enable them access the loans government will facilitate for them.

According to him, the miners’ cooperatives will access loan from between N2 million and N100 million, which they will repay in 15 years at five per cent interest rate per annum.

He also explained that a loan of N2 million and below would only require a guarantor while a miner seeking to access a loan above the sum of N2 million would need to provide required collateral.

He said: “I realized that a lot of people could not access the money because of collateral and I advised that it be reduced so that those who need small loan of not more than N2 million can access without a collateral but a guarantor of level 14 and above in the civil service.”

While at the site of the ongoing construction of the Gemstones Market, he explained what the market is being constructed for, which he said gemstones would be sorted, identified and graded including cutting, polished, and ready to be made into jewelry.

He also added that capacity building of persons in the gemstones and jewelry industry is ongoing in Abuja, and most of them would move into the market in Ibadan including the Gold Souk in Kano since they would be engaged in jewelries and gemstones production for local and international markets.

According to the Minister, Federal Government’s mineral cluster projects in the six geopolitical zones indicate efforts to woo investors into the country’s solid minerals sector, and also the facilities would provide a conducive atmosphere as far as ease of doing business is concerned.

He said investors would invest also in processing of minerals, but made it clear that government would not be involved in the running of the facilities.
“By the time these projects are completed, we are looking at the system of Public Private Partnership, PPP, where we have facility and plant management systems in place who will run this projects and of course there will be recourse to government as appropriate but we don’t want to get government involved in the running of the six clusters”, he added.

Ayanleke also expressed optimism that these projects are viable and could change the narrative in the sector, especially as it concerns artisanal and small scale miners in the country.

He added that they would improve productivity, boost confidence and discourage export of raw ore, hence he called on miners to take advantage of the five per cent interest rate on available loan facilities provide by the Federal Government as it would enable them procure necessary mining equipment and other logistics for smooth operation and ease of doing business.