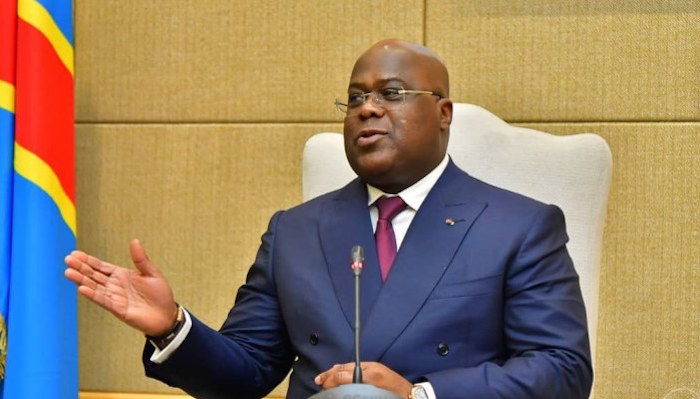 Congolese leader says measure is aimed at combatting fraud within the lucrative sector.
Tshisekedi told ministers he wanted to end the squandering of mining assets by unnamed political actors and officials. File: AFP

Felix Tshisekedi, president of the Democratic Republic of the Congo (DRC), has demanded a ban on issuing and trading mining permits until the country’s mining registry has been audited, a measure aimed at combatting fraud within the sector.

Tshisekedi told ministers he wanted to end the squandering of mining assets by unnamed political actors and officials involved in the administration of the mining register, which records mining concessions, according to minutes of the meeting seen by Reuters news agency on Saturday.

“This recommended clean-up will increase the contribution of the mining sector to the state’s budget and help, as a priority, the people benefit from the mineral wealth of our country,” Tshisekedi told ministers.

The move is an escalation of Tshisekedi’s continuing review of deals struck by his predecessor Joseph Kabila, which includes a $6bn “infrastructure-for-minerals” deal with Chinese investors.

The DRC is the world’s top producer of cobalt and Africa’s biggest copper producer, but more than 70 percent of its roughly 100 million people live on less than $1.90 per day, according to the World Bank.

Transparency activists have estimated the DRC has lost out on billions of dollars of revenue from mining deals over the past two decades.

Tshisekedi gained the presidency through a power-sharing settlement with Kabila, following the disputed 2018 election, but he has gradually taken almost all the levers of government, political analysts say, and been increasingly outspoken about Kabila’s mining deals.

Mining companies who fail to comply with their administrative and social obligations should have their licences revoked, Tshisekedi told Mining Minister Antoinette N’Samba.

He asked N’Samba to identify mining companies where the state had not gained 10 percent of shares when the permit flipped from exploration to exploitation, as required by the mining code.