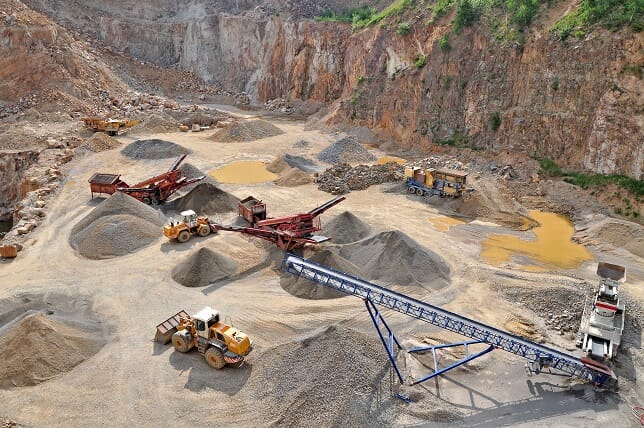 Virtually all the states in Nigeria depend on federal allocation, which is not enough to cater for their needs, should the federal government give the permission to utilise their individual resources?

First of all, if the constitution is not amended as it is presently, it does not give states the power to own mineral resources. That power is exclusively in the hands of the federal government. But our mining laws have given states the opportunity to, for example, support and invest in companies that are mining, create their own companies that will also partner with the private sector to derive benefits.

However, there is a big problem: If the federal government, with all its resources, could not make the mining sector grow, how much can the states do? The issue of ignorance, weak or poor governance, little or no technical knowledge about mining may even be worse at the state level.

The second thing is that our states, with the exception of very few, do not know how to generate money, apart from coming to the centre to collect allocations. Looking at the nature of governance in Nigeria, you can see that there are very few governors or states that have good sense in really looking inward to boost their sources.

Again, states have different types of minerals at different scales. And you know that minerals are not manmade, it is not anybody’s wish. It is what God endowed in your area. And the same mineral belt can start from one state to another. So as at today, the same problem bedevilling the federal government is also affecting states.

I wish they would understand the need to open their states and encourage private investors. But because of ignorance, people will think that because they have mineral resources it automatically translates to wealth, which is not true.

Mineral resources require a lot of investments and time to develop; that is why it is only those that are familiar with the industry that know what to do along the line and get the minerals developed. This is because you will start from the unknown or little known to good understanding, and then, definition and exploitation. And this takes a lot of money and time to do. If you are in the business you can understand how to do it, and to what extent.

In the early 1970s, the government nationalised and took over all these industries and created corporations, such as the Nigerian Mining Corporation, Nigerian Coal Corporation; and they took monopoly of mining and ran down the entire sector and mining became zero in the country.

That is why, during the Obasanjo administration, the new mining act came in 2007 and reverted that situation to what we had. It allows the private sector to have 100 per cent control and let the government be the owner of the minerals to license people and regulate the sector so that people would follow the rules and regulations for the maximum benefit of the country.

That is what we have been, up to now; but unfortunately, the investment has not been coming because of the reasons I mentioned to you earlier. I happened to be the pioneer director-general of the Mining Cadastre Office, which is part of the Ministry of Mines and Steel Development, which is responsible for issuing mining licences.

It is a product of mining sector reform. I started it from 2005 to 2008. I made it to be private sector friendly and removed the influence of government, but politicians wanted to have control, so they refused to allow it work because of lack of understanding.

I doubted the states, but I can tell you which state has what. But they need a lot of investments to be developed and exploited; not that today you will go and start digging. It doesn’t work like that. It requires a lot of money to do exploration. The development also requires a lot of expertise, that is why some of the states that don’t understand will attempt, and instead of making money they will lose and run away.

In mining, it is very easy to lose money if you don’t have the knowledge. That is why there are many fraudulent people around who take advantage of those who don’t know and make money without any result.

Can we consider gold mining in Zamfara State as a success story, looking at what the governor showed President Buhari? Do they have it in commercial quantity to boost their internally generated revenue?

No doubt, Zamfara State has gold, which is being mined by the Chinese and quite a number of illegal miners roaming the bushes and are practically uncontrolled, damaging every environment and with little benefit to the government. That is the same thing I told you about lack of knowledge and careless attitude of the Nigerian government. The sector is not regulated; therefore, everyone is out there doing whatever they want.

If you go to the ministry they will tell you that they know nothing about what is going on there despite being in the position to know who goes there, where and what they do. They can stop or jail illegal miners, but they don’t do it.

The officials they send engage in corruption as illegal miners give them money and they walk away. Because of this, there are lots of incursion of foreigners into Nigeria. Some come with a lot of skills of how to mine and process gold, some come with capital to invest, all in an informal/illegal way.

They get villagers to the bush and buy them food, give them working tools and they produce the gold and give them.

And I tell you that many of these foreigners would get gold from neighbouring countries, bring into Nigeria and smuggle it to Dubai because our systems are weak. You will find it very difficult to smuggle this gold through their countries like Niger, Mali, Chad, Burkina Faso and so on. If they come to Nigeria, they will just go to the airport and bribe whoever they want to bribe and take it to Dubai.

So, Dubai is recording a lot of gold from Nigeria, which the country does not know exists. We also know that not all the gold is from Nigeria because you cannot point out a place where there is big scale mining taking place to produce it.

Also, the gold produced in Zamfara might have been bought from all kinds of sources. This is because if you ask him to take you where the gold is mined, I bet he will not be able to take you there. In Nigeria, if you have money, there are people that can bring you gold from wherever, around other countries.

I am now the chairman of the Presidential Artisanal Goldmine Initiative (PAGMI), which the presidency initiated to assist local miners to produce gold so that we can buy and deliver to the Central Bank of Nigeria.

The Zamfara governor was thinking the federal government would give him money as they did in the Anchor Borrowers Programme in agriculture. He was trying to impress the president with the gold to access funds.

Gold mining in Zamfara is nearly done illegally and informally, so the government has not been able to organise the industry to even get value for the country.

If you go to the ministry and ask how much gold is produced in Nigeria, they will not tell you, or they will tell you a figure that will be out of place.

But if you go to Dubai they will tell you how much gold is coming into their country. So, unfortunately, poor governance and ignorance have not allowed us to utilise what we have for our benefit.

Nigeria has so many mineral resources, which one has a comparative advantage over others?

I like it when you say comparative advantage because if you go to the ministry today they will tell you that they have 44 minerals. But I will tell you how they came about them in 2005 and 2007 and selected some to be strategic.

But you don’t need to have 100 or 10 minerals; hold on to one, provided you have a comparative advantage over it. That means your scale of endowment is huge, then you can be producing and exporting.

Also, certainly we have gold, which can be developed in a belt that stretches from Katsina through Zamfara to Kebbi, Kaduna, Niger, Kwara, Ondo, up to Osun states. In this entire belt across the country, there are occurrences of gold. It means that if a lot of investment is focused into that and all the exploration done, you are likely to come up with goldmines.

Currently, there is one official goldmine in Nigeria running in a big scale (Segilola project) in Osun State. And it took a number of years of work, effort and investment. It was a Nigerian guy that had gone abroad to stock exchange and invested quite a lot of money. In fact, it took about $80million to build the mine alone.

Apart from that, there are little Chinese miners, some legal and some illegal. All the rest are small scratching activities – artisanal mining.

We also have tantalum and niobium or tantalite and columbite. We know them to occur in many places along the gold belt and some central areas around Plateau, Kano, down to Kogi and so on. This has been mined, even by the Europeans; and these are very high value minerals.

The same areas host some of these minerals that are important. We call them energy minerals because they are used in these new drives for renewable energy to do electric vehicles and so on. Cicium is very good. And Nigeria is very famous for tin in Jos, Plateau area, Nasarawa, Kaduna, Kano, Bauchi and those states around.

There is one famous tin mine developed by an Indian company in Riruwai, Kano State. It has been an ancient mine since colonial times, but these people have bought it from the government and invested heavily. If you go there today you will see the scale of activity there underground.

Lead zinc also has a belt, right from Gombe through Taraba, Benue, part of Plateau, down to Ebonyi. It is a belt with a lot of deposit of lead and zinc, where quite a number of Chinese are working, some legally and some illegally. And they are exporting raw minerals.

There is coal for power generation. Coal is also vast. It exists right from Gomb, Adamawa through Benue, Kogi into Enugu

In Nigeria today, because of energy challenge, all the cement companies are using coal to produce. Dangote has opened a coal mine in Kogi, Ashaka has opened in Gombe, trying to get coal to burn and use for cement production.

So, this has opened a new opportunity for coal, but the best thing would have been to produce power and send to where it is needed, but you know, this is Nigeria. Nobody wants to invest, nobody wants to do much, or we lack the understanding and so on.

These are the ones we really have comparative advantage, but we have others like iron ore, which is of low quality. There are high quality iron ore in other countries; that is why Ajaokuta failed.

We built Ajaokuta, but it will never work. People don’t know why it is so and they keep saying that every government that comes sanks billions there.