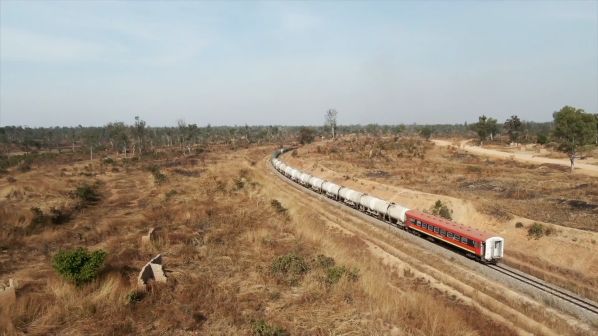 The line connects the landlocked countries of the Democratic Republic of Congo (DRC) and Zambia to the Atlantic coast.

ANGOLA’s Ministry of Transport is preparing to launch a tender to operate, maintain and improve the 1067mm-gauge Benguela Railway that connects the landlocked countries of the Democratic Republic of Congo (DRC) and Zambia to the Atlantic coast.

Travelling through the Lobito corridor, the 1344km line is expected to play a more important role carrying exports of copper and cobalt ore to international markets via the Port of Lobito.

The Angolan government is looking to attract operators specialised in logistics and freight transport, as well as with the expertise to manage, maintain and introduce technical improvements to the infrastructure, according to Angola’s minister of transport, Mr Ricardo Viegas D’Abreu.

A presidential order for a “service concession contract for the operation, management and maintenance of the railway infrastructure for the general transport of ore, liquid and gas cargo” was issued in September 2020, and has since attracted interest from international companies from China, the United States, Germany and other parts of the world.

The concession has a fundamental objective of revitalising exports of copper and cobalt produced in the DRC and Zambia via the Port of Lobito. According to MineSpans, IHS Markit’s global mining market analysis models, 80% of the minerals extracted from these two countries will be transported via the Lobito Corridor by 2030, as it provides the shortest route between the Katanga mining region in the DRC, the Copperbelt in Zambia, and a deep-water seaport. Raw materials from the region are currently exported via the ports of Durban, South Africa, or Dar-Es-Salaam, Tanzania, which is up to four times longer than via the Benguela Railway.

A connection will be established between an existing rail link with the DRC and a branch line connecting the Municipality of Luacano, Moxico, and the Jimbe Border Post on the Angola-Zambia border at the earliest opportunity, providing direct rail access to the Zambian Copperbelt.

Services on the line ceased during Angola’s 26-year civil war, which ended in 2002, and the infrastructure was badly damaged during the conflict. A ceremony was held in August 2014 to mark the completion of a project to rebuild the line from Luau on the border with the Democratic Republic of Congo to Lobito on the Atlantic coast.

The DRC has the largest cobalt reserves in the world at 3.6 million tonnes, and the country extracted 66% of the global cobalt supply in 2020. Copper production also increased by 12% last year. Copper production in Zambia also followed the trend, registering a 13.6% increase in 2020.

Mining reforms, investments scaled up despite the pandemic