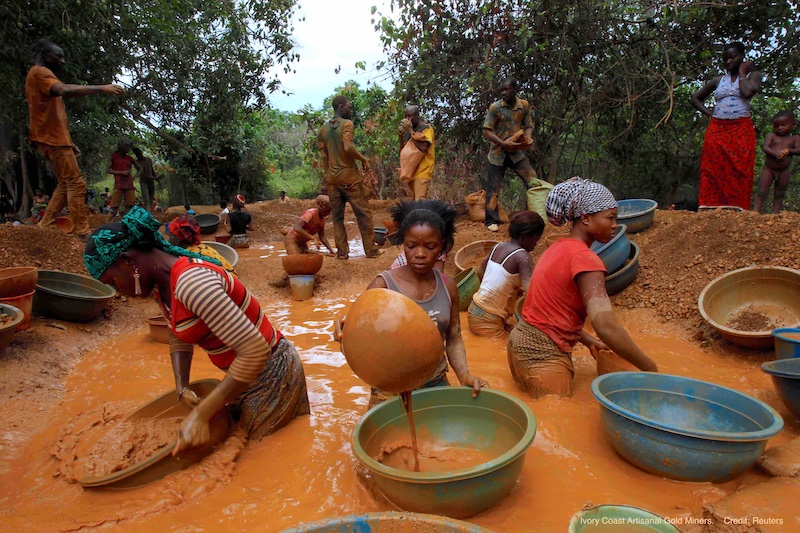 An environmental think tank in Cameroon has raised the alarm over the pollution of rivers in the country’s east and north. The Centre for Environment and Development (CED) says two Chinese gold mining companies are discharging toxic mercury and cyanide into the rivers every day, putting downstream communities and wildlife at risk.

“The latest tests, conducted in several waterways in June 2022, including the Djiengou River, which runs through the village of Kambélé III … in eastern Cameroon, showed traces of mercury in the surface of waters flowing down from the nearby gold washing ponds,” Marc Ansèlme Kamga, an environmental researcher at CED, told Mongabay. “The results of the water samples taken showed an average daily use of 40 liters [10.5 gallons] of mercury and cyanide per Chinese company.”

Kamga estimateed  that Mencheng Mining and Zinquo Mining each have 20 people working in washing ponds along the Djiengou River, with each worker using as much as 2 liters (half a gallon) of mercury and cyanide per day.

These chemicals are extremely toxic, which makes the presence of school-age children working at gold mining sites across the region alarming to observers.

At one gold washing pond near Kambélé III, 8-year-old Pierre works in a pit alongside his parents. His father, the muscles in his bare arms clearly outlined, gave up farming to work in the gold mines. Pierre, his unkempt hair covered in mud, has worked alongside him since before his eighth birthday.

An administrator at a school elsewhere in Cameroon’s East region says that up to 96% of pupils there have, like Pierre, left school to work, panning for gold in ponds controlled by Chinese investors, where they can earn money without the need for a school diploma.

“At the Mali public school, in a fifth-grade class with 100 students enrolled at the beginning of the 2020/2021 school year, there were only four students left in the same class a few months later,” says a source from the village’s school, pointing to an attendance list showing only four students as regular class attendees.

Danger to residents and wildlife

Kamga and the CED team said they were alarmed to see the carcasses of animals in the rivers as they collected samples. “In the Batouri area, we found dead elephants in the water. We believe this is due to them consuming these polluted waters.”

The NGO Forest and Rural Development (FODER), which works with forest communities in the area around Kambélé III, said residents there are no longer able to water their livestock, eat fish from the river, or use the water for their own needs. FODER said mining activity has gathered pace recently, and thousands of liters of toxic cyanide and mercury are being discharged into waterways annually.

The village of Wandja sits in a gold-producing area in the northern region of Adamaoua, on the border with the Central African Republic. Gold miner Philippe Dono said the industry is damaging the region’s rivers: “The owners of gold mining licenses here have diverted waterways such as the Fell River, the Wandja River, and part of the Lom River from their beds and polluted them with mercury.”

In the East region, a 2-kilometer (1.2-mile) stretch of water is suffering the same fate, according to a FODER member.

One community elder in Mali said all the rivers are polluted with mercury.

“Only the Yawil is drinkable; the rest are polluted with mercury,” said Pilo, the village chief.

Despite recommendations by the World Health Organization that miners switch to alternative chemicals and processes to amalgamate gold, its use remains widespread in Cameroon and elsewhere.

The global health body warns that exposure to even small amounts of mercury can cause behavioral and neurological disorders; kidney failure has also been linked to sustained exposure to elevated mercury levels.

“Gold is mined by digging to a layer of earth containing gold which is then mechanically routed to one or more washing ponds,” CED’s Kamga said.

“The way that Chinese companies are mining gold today seems to be unsustainable because it poses many health problems, pollution problems, and other problems relating to environmental destruction.”

Mongabay’s attempts to reach managers at the two companies were unsuccessful. Questions sent to the mayor of Batouri, Auberlin Mbelessa, about the criteria for granting licenses to companies using toxic products also went unanswered.

Pilo, the chief of Mali, blamed the responsible authorities in the capital, Yaoundé. He said they don’t verify gold mining companies’ competence or require them to conduct environmental impact studies as required by law in Cameroon.

MAINTENANCE THE KEY TO EFFICIENT HVAC ON MINING MACHINES