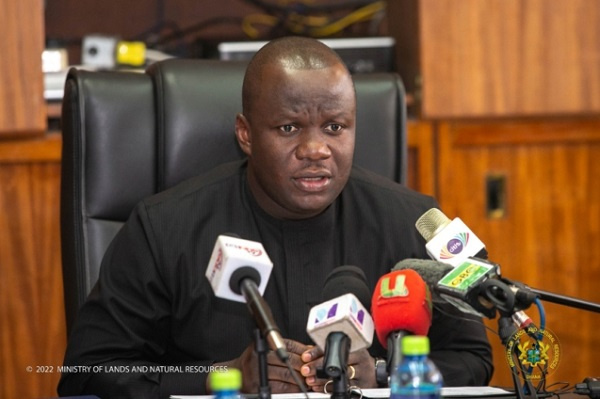 Mr Samuel Abu Jinapor, the Minister for Lands and Natural Resources, has cautioned communities benefiting from the Community Mining Scheme (CMS) not to engage the services of foreigners in their activities.

The Minister emphasised that the Scheme was the preserve of Ghanaians and that any attempt by foreigners to infiltrate the sector would not be tolerated.

He vowed to revoke the license of any firm found to engage foreigners at its site.

The Minister explained that government holds the position that Ghanaians must benefit from the country’s natural resources and the CMS was the surest way of manifesting that belief.

“We want natives and the Elders of Asante Akyem South to enjoy maximum benefits, so I am pleading with you not to allow foreign nationals to engage in it. This should not happen at the expense of the natives of this town,” he maintained.

“This Community Mining Scheme is for the people of Tokwae and Asante Akyem South. Foreigners are not allowed to participate in it. If one foreigner is found working in this mining operation, the mining license, which I have signed as Minister will be revoked,” he warned.

Mr Jinapor issued the stern warning during the launch of the Tokwae Community Mining Scheme on Thursday.

He disclosed that government as part of its job creation strategy was seeking to establish at least 50 CMS in 2022.

He stated that the new module will replace the archaic and more harmful galamsey practices and empower mining communities economically.

“So far, we have commissioned seven community mining schemes and this year, under the direction of the President, we intend to commission 50 Community Mining Schemes. Agenda 50 Mining Community Schemes begins with Tokwae”, he said.

“Community Mining Scheme, which is done responsibly and has regard for the environment which employs the teeming youth of the country, is indeed an alternative to illegal small-scale mining and that is the strategy of the Ministry.”

The Member of Parliament for Asante Akyem South, Mr Kwaku Asante Boateng eulogized the sector Minister for showing exemplary leadership in his role.

He urged the leaders and residents of the community to heed to the counsel by Mr Abu Jinapor and obey the regulations governing the CMS.

Mr Boateng was happy with the scheme, which he reckoned would relieve the constituency of some headache with respect to unemployment.

Nana Eyim Kum Nipa II, Omanhene of Gyadam, expressed gratitude to the government for the initiative, which would offer job opportunities to the teeming youth in the area and improve upon their living standards.

He pledged the support of the chiefs and other traditional leaders in promoting safety and enhancing security in the operations of the scheme.

The Municipal Chief Executive of Asante Akyem South, Alexanda Frimpong commended the government and the Ministry for completing the processes, which had culminated to the launch of the scheme.

He appealed to the Minister to help deal with illegal small-scale mining activities in the area.

Prior to the launch, the Minister paid a courtesy call on the Omanhene of the area, Nana Eyim Kum Nipa II.