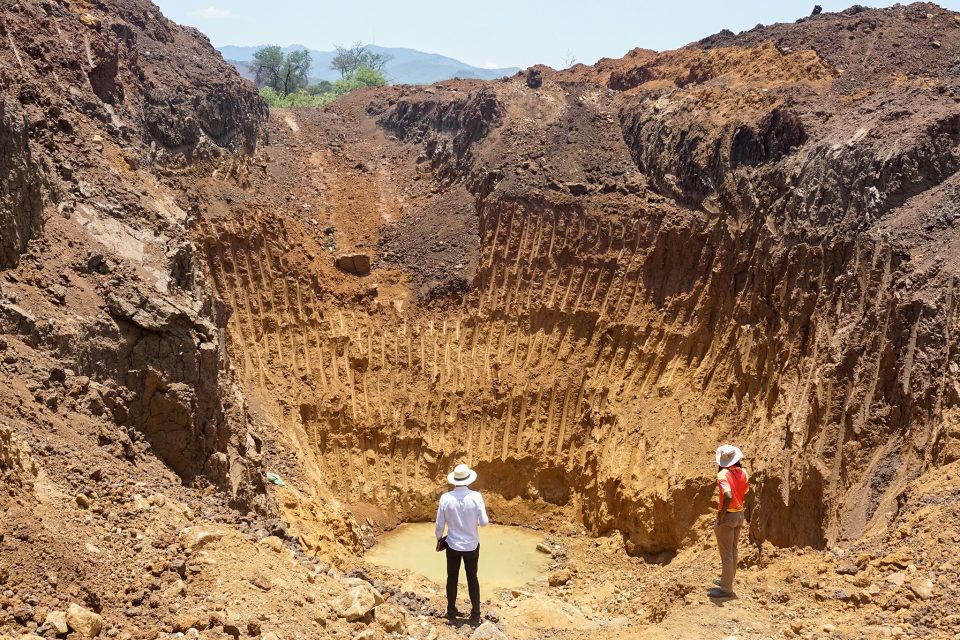 Amid piles of red soil and the buzz of grinding mills, Lloyd Karambakuwa prepares to risk his life for gold.

Tall and slim, the 40-year-old is an artisanal miner in Bindura, a town 86 kilometers (53 miles) northeast of Harare, the capital. On this day, he dons a pair of worn-out shorts, attaches his headlamp and throws his equipment into a shallow tunnel. There is nothing to keep the tunnel from collapsing.

He has no protective clothing, equipment or formal knowledge of mine safety. Sometimes he has to work in water, which may be tainted with chemicals or rise frighteningly high.

Karambakuwa is among Zimbabwe’s hundreds of thousands of artisanal miners, subsistence freelancers who use their own equipment and resources. Most have no permit and no legal protections, and thus their work is largely invisible as well as illegal. And yet they are indispensable to Zimbabwe’s gold mining industry, as government buyers ignore the law and purchase their gold, no questions asked.

“It’s a dangerous game,” says the soft-spoken father of three, who has been a miner for seven years. “But it’s better to risk than sit, because I do not have many options in place to take care of my family.”

About 500,000 people work in small-scale and artisanal mining, supporting about 2 million people, according to the Zimbabwe Economic Policy Analysis and Research Unit, an independent think tank.

“[Artisanal small-scale mining] activities are associated with informal, unregulated, under-capitalised, under-equipped and labour-intensive operations where technical and management skills are lacking,” according to the study.

At least six mines have collapsed nationwide in the past year, most of them operated by artisanal miners, according to Paul Matshona, an artisanal miners’ adviser at the Zimbabwe Environmental Law Association, a nongovernmental organization. An estimated 190 miners died in those accidents.

Those figures include a mine collapse last November in Bindura. That accident alone killed an estimated 20 miners.

Sophia Mbonje’s nephew, Bright Mbonje, was among those who died.

He was 23 and had been an artisanal miner for three years. When the accident occurred, Mbonje says she and other miners’ relatives rushed to the scene. They waited two weeks for a rescue that never came.

“If he was formally employed, maybe all this would not have happened,” she says, voice bitter. “But he went into this trade to take care of his family as he had no other options.”

Artisanal miners work along the Mutare River, near farms and mountains. Some of the miners dig for gold.

Onesimo Mazai Moyo, permanent secretary of the Ministry of Mines and Mining Development, says his agency is working with other ministries and organizations to address mining accidents and other issues.

Moyo says the groups are working on a strategy to bring more artisanal miners into mainstream mining. But a nationwide coronavirus lockdown has delayed those efforts.

“It’s not always easy to engage them if [they are not registered] and you do not know where they are mining,” he says.

Gold mining is Zimbabwe’s largest earner of foreign currency. In 2019, as part of a three-year trend, the government’s main buyer saw 63% of its gold deliveries come from artisanal and small-scale miners.

Fidelity Printers and Refiners, the government-owned and -operated enterprise that oversees the buying and selling of gold, deals with unregistered artisanal miners. “We accept sellers as long [as they] have any identification document,” says Fradreck Kunaka, general manager.

Kunaka sees the gap between the law and reality, and says that’s why he has urged the government to legalize more artisanal miners. He also notes that if they aren’t legalized, they can’t get government help.

“If it’s a cat-and-mouse situation as it currently is, there is no way we will be able to assist them in terms of maybe educating them on safer ways of doing their business, because the moment they see any regulator, they disappear,” Kunaka says.

Police regularly raid mining sites and arrest Karambakuwa and his colleagues. But, Karambakuwa says, sometimes, “when you give the police officers money, they will let you go.”

Karambakuwa makes between $15 and $45 a day, enough for rent, school fees and other bills. But he can’t afford licenses and registration fees for miners, he says, which can cost $2,500 to $3,000. In fact, activists say, the fees box out most artisanal miners.

Moyo, the ministry secretary, disagrees: “Our fees are worth very little compared to the gold they get. But we are reviewing our fees from time to time to ensure that they don’t stifle entrance into the industry.”

Karambakuwa says he sees accidents often but has never been hurt himself. His wife worries, he says, but he stays in mining because formal jobs in Zimbabwe are scarce.

Meanwhile, Mbonje, a widow with two children, recalls how her late nephew used to help her with rent and other necessities. She laments that she can’t help support the pregnant wife he left behind.

She recalls that Bright did mining mainly for the money. Yet days before the accident, he refused to go to the mine, she says. He complained that it was too dangerous.