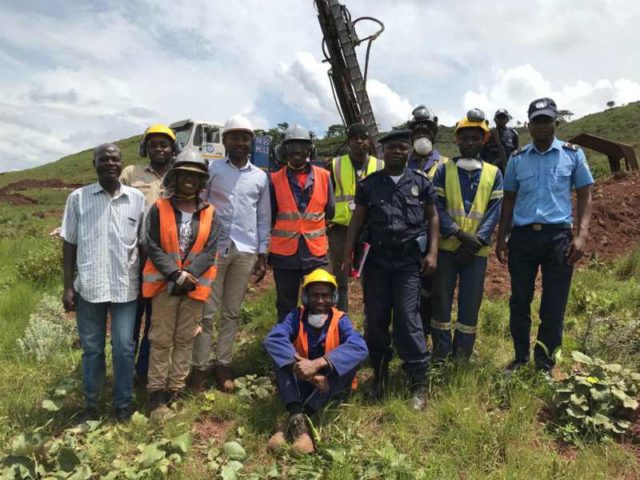 As the world prepares for the adoption of greener energy alternatives and the electrification of transport, the demand for rare earth metals is growing rapidly.

Recognized for their unique physical properties and benefits, neodymium and praseodymium (NdPr) are driving the change as the critical metals required in the manufacture of high-strength permanent magnet electric motors and generators.

These magnet motors are used to power electric vehicles and offshore wind turbines and will be at the core of our clean energy future. ASX-listed Pensana Rare Earths’ Longonjo NdPr project in Angola has a number of unique advantages that will allow the company to expedite the development of the project, with sights set on first production in early 2022, chairman PAUL ATHERLEY tells CHANTELLE KOTZE.

The existing, modern regional infrastructure is a unique advantage for Longonjo’s development and includes its close proximity to the Chinese-built US$2 billion Benguela rail line (only 4 km from site) which leads directly into the Atlantic Ocean port of Lobito.

This is in addition to the projects’ favourable high-grade and close-to-surface carbonatite-hosted NdPr deposit. The thick blanket of high-grade mineralisation is weathered for the first 30 m below surface and extends over 1.5 km along strike, making the mineralisation effectively free dig, with a low waste-to-ore strip ratio and amenable to low-cost mining methods.

These characteristics distinguish Longonjo from other rare earth projects and will be leveraged by Pensana to rapidly develop a relatively low capital intensity, low technical risk, conventional open pit mine and simple on-site comminution and flotation beneficiation plant (and potential NdPr carbonate plant) to produce a high-grade product for export, says Atherley.

The findings of the preliminary feasibility study (PFS) published by engineering firm Wood Group in November 2019, found that Longonjo could produce an average of 56 000 tpa of concentrate over a nine-year mine life, for an upfront capital cost of $131 million.

Based on the two-phase development of a 2 Mtpa mining operation, Longonjo would process 1.5 Mtpa of higher grade resource, producing 60 000 tpa of concentrate, containing 4 600 tpa of NdPr and 20 700 tpa of rare earth oxides during the first three years of operation.

From the fourth year of production, the front end of the plant would be expanded (at a cost of $12.5 million funded by cashflow) to process 2 Mtpa to maintain concentrate and NdPr production.

The PFS estimates that the project would generate total revenues of more than US$1.9 billion and annual revenues of approximately $220 million, at a pre-tax and pre-royalties IRR estimated at 101%, with a 13-month payback period.

These results have paved the way for the expedited development of the project which is currently subject to a definitive feasibility study (DFS), says Atherley, the results of which is expected in Q3 2020, after which Pensana will announce the main financing for the project.

The focus for now remains on bringing Longonjo to DFS status, obtain full permitting, agree on fiscal terms with the Angolan government and secure offtake agreements, which collectively will enable debt financing to be finalised.

A 7 000 m infill and extension drill programme in support of the DFS has also been undertaken. The programme was aimed at extending the current nine-year mine life by converting more of the inferred mineral resource into measured and indicated and then into proved and probable ore reserves, explains Atherley.

The programme will also test high-grade targets in fresh material immediately underlying the shallow weathered zone, which lie outside the limits of the current mine plan. These targets have the potential to provide additional sources of high-grade NdPr material.

The updated mineral resource estimate for Longonjo, which will incorporate the new drilling, is scheduled for completion in May 2020.

As part of the DFS, Pensana has committed to studying downstream processing of the high-grade magnet metal concentrate it plans to produce at Longonjo. This could see the project be one of the first major rare earth carbonate suppliers to be developed in a decade.

While the PFS strategy was to process on-site and ship a high-grade concentrate for export, the new study will investigate the feasibility of the downstream processing of 50 000 tpa of concentrate into a high grade NdPr carbonate for export, which Atherley says, “could enable the company to capture a substantially increased proportion of the product value in Angola.”

“The decision to evaluate downstream processing came about from preliminary discussions with potential customers and major trading houses, which indicated that customers in China, Japan, Korea, Germany and the UK would be interested in importing high-grade NdPr carbonate from us rather than concentrate,” says Atherley.

While the new study will review the economics of this, preliminary studies have indicated that this is expected to require an increase in the capital cost of the project from $131 million to around $200 million.

“This project also allows us to invest further in Angola – a country with has been relatively undeveloped for a long time,” says Atherley.

He adds that that the government of Angola and its various ministries have been very supportive towards the development of Longonjo and are eager to diversify the economic base of the country, which has predominantly relied on oil and diamonds to date.

“The government’s mining code and fiscal regime, customs exemptions and the easing of foreign exchange controls coupled with their continuing support, will be instrumental in getting this project off the starting blocks,” he adds.

In addition to support from the Angolan government, the Angolan Sovereign Wealth Fund – Fundo Soberano de Angola (FSDEA) – has shown its support towards the project by subscribing for approximately 7.6 million shares in Pensana at A$0.27 per share.

This translates into an investment of just over A$2 million into the project, which means that FSDEA will become a strategic cornerstone investor in the company, with a 4.8% shareholding.

While the project hosts a number of individual rare earth oxides (REO) including significant amounts of lanthanum and cerium, the true value lies with the neodymium and praseodymium rare earths, which alone account for 80% of the basket value from a pricing point of view. The interest in terms of energy consumption going forward also lies in the neodymium and praseodymium, explains Atherley.

“The International Energy Agency recently reported that there is over US$1 trillion being invested by China, Britain and the European Union into offshore wind as the main source of renewable energy for these developed economies. Each offshore wind turbine uses between 3 and 5 t of permanent magnets compared to between 1 and 2 kg for an electric vehicle.

“With demand for these permanent magnets growing at 1 500% over the next 20 years, offshore wind is set to overwhelm demand,” says Atherley.

Based on these figures, it is now more important than ever to ensure security of supply of the metals that are critical to the transition from fossil fuels to energy electrification if we are to achieve a zero carbon economy in future.