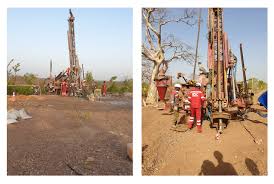 However, the RC drill programme has since been suspended owing to Covid-19 restrictions and will be completed when conditions allow.

Meanwhile, work programmes in Mali are continuing with the necessary safety protocols in place.

The Madina Foulbé permit has been subject to early stage exploration by its former owners, including regional soil geochemistry and about 1 750 m of shallow, reconnaissance, rotary air blast drilling using a lightweight drill rig. The results of that work have led Cora Gold to identify two priority targets, Tambor and Madina.

The priority targets include Tambor and Madina, with 2.5 km- and 2 km-long gold-in-soil anomalies respectively.

CEO Bert Monro says the company has completed about one-third of the maiden RC drill programme at Madina Foulbé, which was designed to gain an understanding of the likely style and width of mineralisation within this large granitic system.

The results indicate continual intersection of good widths of mineralisation, albeit at relatively low grades from initial results, he explains.

“Much of the Tambor target remains to be drilled and this first indication of a consistent gold mineralised system is encouraging,” says Monro.

Results to date confirmed the initial model with extensive zones of gold mineralisation. Across the area tested so far, gold at a grade of 0.63 g/t was observed for a length of 47 m at a depth of 27 m, and at 16.4 g/t for 1 m at a depth of 40 m.