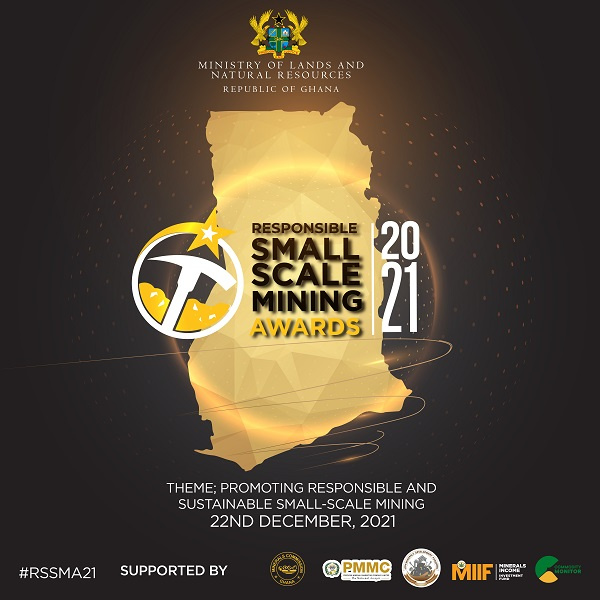 The Ministry of Lands and Natural Resources has instituted an award scheme for players in the small-scale mining sector.

Dubbed Responsible Small Scale Mining Awards (RSSMA), the initiative is meant to encourage players in the small-scale mining industry to operate within the laws to promote responsible mining.

The Minister of Lands and Natural Resources, Mr Samuel Abu Jinapor, announced the scheme when he delivered the keynote address at the first Student Representative Council (SRC) public lecture of the Ghana School of Law, held at the Kwame Nkrumah University of Science and Technology (KNUST) on December 10, 2021.

He said the maiden edition of RSSMA would be held on Wednesday, December 22, 2021.

“The award scheme will, from this year, be an annual event to reward small-scale miners who adhere to the health, safety and environmental standards of mining.”

Mr Jinapor said he was optimistic that the RSSMA would motivate small-scale miners to strictly adhere to the guidelines on small-scale mining spelt out in the Minerals and Mining Act, 2006 (Act 703).

The minister reiterated that given the key role the mining sector played in the national economy, the government would ensure that all bottlenecks were removed for the country to fully benefit from the sector.

He urged stakeholders in the mining sector to work together to ensure proper regulation of the sector.

He observed that the mining industry could not be properly regulated for people to mine responsibly if all stakeholders did not discharge their duties with integrity and transparency.

“We cannot regulate illegal mining if, for example, the inspectorate division of the Minerals Commission cannot monitor the operations of mining or do their work on the principles of integrity and transparency,” he said.

Again, he stressed that “We cannot regulate this sector if the Minister, Deputy Ministers and officials of the Ministry who have the responsibility to offer supervisory duty do not do so on account of integrity.”

Speaking on the theme: “The Legal Regime of the Mining Sector in Ghana – History, Challenges and the Way Forward,” he stressed that the government would continue to wage a relentless war on illegal mining using the law.

“The Ministry of Lands and Natural Resources and I are determined to continue to work tirelessly to construct a lands and natural resources sector which is effectively managed, transparent, and anchored on integrity, thereby, contributing to the realisation of the noble vision of President Nana Addo Dankwa Akufo-Addo,” he said.

Mr Jinapor said the allocation of GH 20 million in the 2022 budget to help in the fight against galamsey was an indication that the government was committed to implementing interventions to sanitise the SSM sector.

He called on tertiary institutions across country to come up with higher education in mining to produce well-resourced graduates with qualifications and knowledge to help improve the mining industry.

The minister said the mineral resources of the country were the property of the people of Ghana vested in the President as a trustee and, therefore, the government had an obligation to ensure that the exploitation and utilisation of those resources benefited “the actual owners of the resource.”

For his part, the Director for Legal Education at the Ghana School of Law, Mr. Kwasi Prempeh, commended the minister for his effort to improve the mining industry.