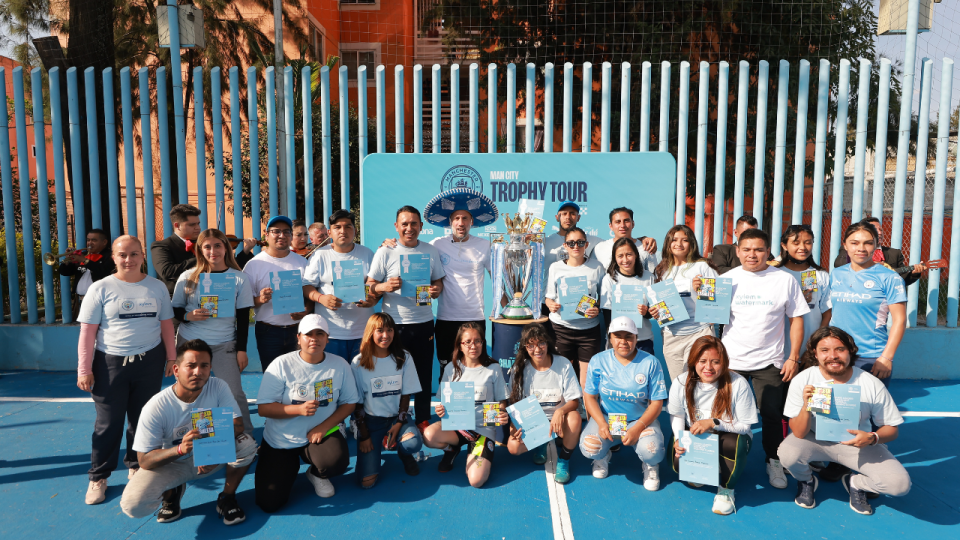 To mark the launch, Pablo Zabaleta and the Premier League Trophy visited the El Coyolito neighbourhood in Mexico City to meet Cityzens Giving Young Leaders who are using the power of football to solve local water issues.

Despite heavy flooding and rainfall, Mexico City is facing a water shortage. More than 20 million residents do not have enough water to drink for nearly half the year and one in five people have access to only a few hours of running water from their taps a week.

This project will see Young Leaders from love.fútbol use specially adapted football games to educate young people in the community on responsible water consumption, as well as the importance of safe water, sanitation and hygiene (WASH).

Zabaleta took part in a youth-led football and water festival and engaged in a Q&A session with young participants, before learning a traditional Mexican dance.

Reflecting on his visit, Zabaleta said: “Meeting the Young Leaders in Mexico City was an amazing experience. The way they are using football to teach children about the importance of water is creative and inspiring, and it’s great to see this unique initiative from Cityzens Giving and Xylem expanding to more cities. The Young Leaders are so engaged with supporting their community and to be able to contribute in a small way was a privilege.”

As part of the activity in the country, Young Leaders, Xylem employees and fans from Manchester City’s Official Supporters Club in Mexico City also joined forces to repaint the El Coyolito pitch and create a water-themed mural.

In addition, City in the Community coaches delivered training to 40 Young Leaders in Mexico City, sharing expertise and knowledge in leadership, community football and WASH. This was followed by a three-day digital Summit, connecting Young Leaders and Xylem experts from all ten cities to share ideas on tackling water challenges through football.

Valeria, a Young Leader with love.fútbol said: “We want all the children here to be aware that responsible water consumption is very important, and they must take care of it. We received training from Man City coaches and learnt several games that teach kids about water conservation through football. We are really happy and thankful that Man City and Pablo Zabaleta visited our community.”

Later this season, City fans will have a chance to learn more about the five new Water Heroes Academy projects and vote for their favourite young water heroes.

Syrah to restart production at Balama graphite project in Mozambique