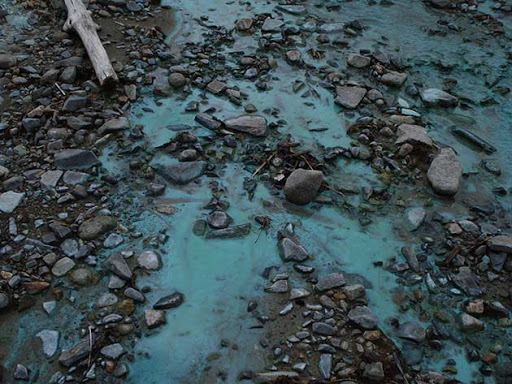 Local communities in the vicinity of the abandoned Panguna copper mine, have taken decisive action to hold the global mining multinational, Rio Tinto, accountable for alleged environmental and human rights violations during the mine’s operations between 1972 and 1989.

The mine operated in the mountains of central Bougainville in Papua New Guinea until 1989.

The complaint by 156 residents was lodged with the Australian Government in September by Australia’s Human Rights Law Centre and subsequently accepted in November, paving the way for a non-judicial mediation process.

“We and the communities we are working with have now entered into a formal conciliation process with Rio Tinto facilitated by the Australian OECD National Contact Point and talks with the company will begin very shortly,” Keren Adams, Legal Director at the Human Rights Law Centre in Melbourne told IPS.

Rio Tinto was the majority owner of the Panguna mine through its operating company, Bougainville Copper Ltd, with a 53.8 percent stake. However, 17 years after it began production in 1972, anger among indigenous landowners about contaminated rivers and streams, the devastation of customary land and inequity in distributing the extractive venture’s profits and benefits triggered an armed rebellion in 1989. After the mine’s power supply was destroyed by sabotage, Rio Tinto fled Bougainville Island and the site became derelict during the decade long civil war which followed.

The mine area, which is still controlled by the tribal Mekamui Government of Unity, comprising former rebel leaders, hasn’t been decommissioned and the environmental legacy of its former operations never addressed.

Now, according to the complaint, “copper pollution from the mine pit and tailings continues to flow into local rivers … The Jaba-Kawerong river valley downstream of the mine resembles a moonscape with vast mounds of grey tailings waste and rock stretching almost 40 km downstream to the coast. Levees constructed at the time of the mine’s operation are now collapsing, threatening nearby villages.”

Helen Hakena, Director of the Leitana Nehan Women’s Development Agency in Bougainville’s main town of Buka, fully supports the action taken by her fellow islanders.There are further claims that contamination of waterways and land is causing long-term health problems amongst the indigenous population, such as skin diseases, diarrhoea, respiratory illnesses, and pregnancy complications.

“It is long overdue. It is going to be very important because it was the big issue which caused the Bougainville conflict. It will lay to rest the grievances which caused so much suffering for our people,” Hakena told IPS.

The people of Bougainville believe that Rio Tinto has breached the OECD Guidelines for Multinational Enterprises by failing both to take action to mitigate foreseeable environmental, health and safety-related impacts at the mine and respect the human rights of the communities affected by its extractive activities. The Human Rights Law Centre claims that “the mine pollution continues to infringe nearly all the economic, social and cultural rights of these indigenous communities, including their rights to food, water, health, housing and an adequate standard of living.”

“While we do not wholly accept the claims in the complaint, we are aware of deteriorating mining infrastructure at the site and surrounding areas and acknowledge that there are environmental and human rights considerations,” Rio Tinto responded in a public statement.

“Accepting the AusNCP’s ‘good offices’ shows that we take this complaint seriously and remain ready to enter into discussions with the communities that have filed the complaint, along with other relevant communities around the Panguna mine site, and other relevant parties, such as Bougainville Copper Ltd, the Autonomous Bougainville Government and PNG Government,” the statement continued.

In 2016, Rio Tinto divested its interest in Bougainville Copper Ltd, the operating company, and its shares were acquired by the PNG and Bougainville governments. Simultaneously, the corporate giant announced that it rejected corporate responsibility for any environmental impacts or damage.

Mineral exploration in Bougainville in the 1960s, followed by the construction of the Panguna open-cut copper mine, occurred when the island region was under Australian administration. It would subsequently become a massive source of internal revenue Papua New Guinea, which was granted Independence in 1975. During its lifetime, the Panguna mine generated about US$2 billion in revenue and accounted for 44 percent of the nation’s exports.

The mining agreement negotiated between the Australian Government and Conzinc Rio Tinto Australia in the 1960s didn’t include any significant environmental regulations or liability of the company for rehabilitation of areas affected by mining.

There has been no definitive environmental assessment of the Panguna site since it was forced to shut down. However, about 300,000 tonnes of ore and water were excavated at the mine every day. In 1989, an independent report by Applied Geology Associates in New Zealand noted that significant amounts of copper and other heavy metals were leaching from the mine and waste rock dumps and flowing into the Kawerong River. Today, the water in some rivers and streams in the mine area is a luminescent blue, a sign of copper contamination.

Bougainville residents’ action comes at the end of a challenging year for Rio Tinto. It is still reeling from revelations earlier this year that its operations destroyed historically significant Aboriginal sacred sites, estimated to be 46,000 years old, in the vicinity of its iron ore mine in the Pilbara region of Western Australia. The company’s CEO, Jean-Sebastien Jacques, has subsequently resigned.

Nevertheless, Adams is optimistic about the corporate giant’s willingness to engage with Bougainville and PNG stakeholders.

“In the first instance, we hope that this non-judicial process will help to facilitate discussions to explore whether Rio Tinto will make these commitments to address the impacts of its operations. If not, then the communities will be asking the Australian OECD National Contact Point to investigate the complaint and make findings about whether Rio Tinto has breached its human rights and environmental obligations,” the Human Rights Law Centre’s Legal Director said. A full investigation, if required, could take up to a year.

Ultimately, the islanders are seeking specific outcomes. These include Rio Tinto’s serious engagement with them to identify solutions to the urgent environmental and human rights issues; funding for an independent environmental and human rights impact assessment of the mine; and contributions to a substantial independently managed fund to enable long term rehabilitation programs.

Otherwise, Australia’s Human Rights Law Centre predicts that “given the limited resources of the PNG and Bougainville governments, it is almost inevitable that if no action is taken by Rio Tinto, the environmental damage currently being caused by the tailings waste will continue and worsen.”