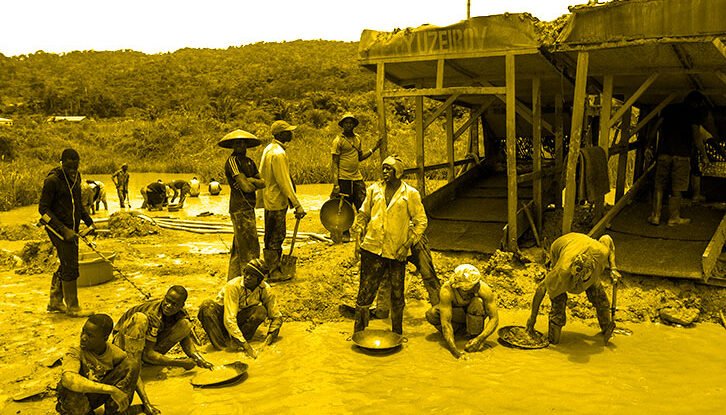 As demand for gold skyrockets, artisanal mining and smuggling ramps up, financing conflict and corrupt politicians, risking human lives and destroying the environment. The Africa Report tracks the precious mineral on its journey from ­ rebel-controlled areas to jewellery stores across the world.

The headlong rush for that glistening metal is one of the ugliest market forces in the world.

On July 14, the COVID-19 crisis prompted the World Gold Council to pronounce: ‘Investors have embraced gold in 2020 as a key portfolio hedging strategy. […] the pandemic will likely have a lasting effect on asset allocation. It will also reinforce the value of gold as a strategic asset.’ By 5 August gold had hit its highest price ever, at $2,048 an ounce.

While traders moved bullion at the press of a button, in Kamituga, a mining town in South Kivu Province, Democratic Republic of Congo (DRC), disaster struck. In the early afternoon of 11 September at least 50 young creuseurs, or artisanal miners, drowned in a river of mud when torrential rains flooded the ‘Detroit’ gold mines to the south of the city. Only one survivor was found by the hundreds of local people who flocked to the scene to help.

A chain of young men stretched down from the mine entrance, framed by sturdy wooden beams, passing up buckets of mud as rescue workers searched for the trapped miners, some of whom had been working 40 metres underground in the makeshift shafts.

Kamituga has been a mining town since the 1920s, when large quantities of gold were discovered there, and a succession of big companies arrived. But it is Kamituga’s artisanal miners, along with the toolmakers, the traders and the transporters, who keep the local economy going.

While the coronavirus pandemic pushed up the gold price worldwide, local prices offered from buyers in Africa actually went down, says Joanne Lebert, executive director of IMPACT (formerly Partnership Africa-Canada), which works to improve natural-resource governance. “Buyers exploited the situation in Congo. More middlemen got involved instead of relying on the network of local traders,” says Lebert. “Transporting gold around the region became harder, and the miners lost out.”

Kamituga’s miners know the peaks and troughs of the international gold market. Amid the global economic calamity, this year was meant to be their time. Operations like the Detroit mine are the perilous starting point of a supply chain that reaches across the region through a network of traders, then local refineries, before it arrives in international trading hubs such as Dubai. Most of the trade evades Congolese officialdom, royalties and taxes.

In Kamituga, there are about 300 purchasing counters for gold, according to local campaigners Justice Pour Tous. A recent United Nations Group of Experts report on Congo’s mining industry says ‘a senior official of the mining administration in South Kivu assessed that about 300kg of undeclared gold transited each month’ through Bukavu, the provincial capital. However, official statistics record gold exports of just 5kg a month from the province.

For years, Eastern DRC has been embroiled in one of the most murderous and complex conflicts in Africa. National forces, local fighters and foreign-backed militias have piled in, battling for political control, resources, borders and ethnic identity.

Rampant smuggling and mislabelling of gold consignments to dodge local and national taxes, as well as international attempts to block gold from war zones, have shaped the region’s gold industry. New refineries in the Great Lakes region can process more than 330tn of gold per year.

You now have a supply chain in which gold is smuggled from Congo’s war zones in Ituri and South Kivu to regional refineries,

The UN experts say most of that is smuggled from eastern DRC. ‘Some refineries acted as brokers, used cash payments that evaded tracing, undertook refiner-to-refiner trading that concealed the origin of smuggled gold and used corporate networks, making it difficult to establish beneficial ownership,’ says the report. ‘Most gold trading evaded the formal banking networks.’

The biggest operations are the African Gold Refinery (AGR) in Uganda, with a capacity of 219tn a year, and the Aldango refinery in Rwanda, which can process 73tn a year. The UN experts refer to documents showing that Alain Goetz, a scion of a Belgian gold-trading family, founded AGR and has a stake in the Aldango refinery and a Dubai-based company called PGR Gold Trading.

“You now have a supply chain in which gold is smuggled from Congo’s war zones in Ituri and South Kivu to regional refineries,” a former UN researcher told The Africa Report. “After that it is flown to Dubai for re-refining, where it can be mixed with gold from other sources. Eventually, gold from a war zone in Congo could end up in a gold bullion bar in Switzerland.”

On the DRC’s north-eastern borders, in Sudan, the pattern is similar. Artisanal miners in conflict zones such as Blue Nile, Kordofan and, most of all, Darfur have been producing tonnes of gold, selling it to traders who smuggle it to the Gulf States.

In 2018, Sudan produced about 93tn of gold, mines minister Adil Ali Ibrahim told Reuters in November 2019. That ranked it as the third-biggest producer after Ghana and South Africa. Between 2014 and 2018, Sudan officially exported gold worth $8.6bn, but its main trading partners recorded imports of Sudanese gold worth $12.7bn.

“The biggest value gap is found in the trade between Sudan and the UAE,” says Lakshmi Kumar, who led a research team for Washington DC-based Global Financial Integrity. That value gap of $4.1bn is most likely due to smuggling. That would be a revenue loss of more than $550m to the state in that period.

Bashir bashes them out

Until January this year, when Sudan opened up the gold market to raise revenue, the central bank in Khartoum was the only entity allowed to buy and export gold, and it set up local trading centres.

Since the revolution that ousted Bashir in April 2019, Sudan’s gold trade has become central in the country’s power politics.

But under President Omar al-Bashir’s regime many artisanal miners dealt with warlords or corrupt officials instead of paying local taxes and royalties. “There were deeply problematic deals between the Bashir regime and, for example, Russian companies which had no background in mining,” says Kumar. “In one day alone, the Bashir government issued 50 licences, without any due diligence process,” she adds. Her team is advising the new government about how to make mining safer and contribute more to public finances.

Since the revolution that ousted Bashir in April 2019, Sudan’s gold trade has become central in the country’s power politics. Mohamed ‘Hemeti’ Hamdan Dagalo, number two in the transitional government, has substantial interests in the industry. His family company, Al Gunade, is in gold mining and trading, with stakes held by his brother Abdul Rahim Dagalo and two of Abdul Rahim’s sons. Hemeti is listed as a director, according to documents seen by the NGO Global Witness.

Hemeti rose to power as a brigadier general in command of some 5,000-6,000 fighters of the government-backed Janjaweed militia. They were rebranded as the Rapid Support Forces, and in 2017 took over the Jebel Marra gold mine in Darfur, along with another three mines.

They used the revenue to buy new weaponry and a fleet of thousands of camouflaged pick-up trucks with artillery mounted on them. Hundreds of other gold mines across the country were controlled by shadowy companies with links to the security services under the Bashir regime. The ruling National Congress Party controlled mines and properties worth more than $1bn.

It was Hemeti’s decision to break with Bashir last year and back the revolution that proved a turning point. Civilian prime minister Abdalla Hamdok has to tread carefully with his reform efforts. Bringing in higher gold revenues would help shore up his government’s rickety finances. Even the strongest supporters of the revolution fear that deteriorating economic conditions could mean the transition loses popular support, allowing the military to take over completely and shelve elections.

For now, as Sudan’s transitional government negotiates peace deals with the myriad armed groups, some of the country’s richest mines can be brought under civilian control again. That is far from the case a couple of thousand kilometres to the west, where several insurgencies are raging in the Sahel.

Regional affiliates of Al Qaeda and Islamic State are in the front line attacking industrial mining operations, but also taking over parts of the informal gold trade in Burkina Faso, Mali and Niger – a business producing over 50tn of gold a year worth $2bn, according to estimates from the Organisation for Economic Cooperation and Development (OECD).

Last year, the Reuters news agency published a groundbreaking investigation that found that ‘for the Islamists, the [gold] mines are both a hideout and a treasure trove of funds with which to recruit new members and buy arms, and of explosives and detonators to stage the attacks that extend their power.’

Insurgents cashed in as they took over the mines. In 24 sites that they attacked in Burkina Faso, the mines were producing more than 700kg of gold a year, worth more than $35m. Government forces have tried to win back territory, closing mines in the north and east.

Over the past two years, gold has become Zimbabwe’s biggest export: formal sales are valued at $1.4bn but smuggled gold could be worth twice as much.

But that threatens small-scale mining, a lifeline for tens of thousands of families. Government forces have been unable to control vast swathes of territory, let alone interdict smugglers who take out the gold in cars and trucks, or sometimes strapped to cows or hidden in bales of hay.

Insurgents are also targeting the gold trade in Mali, where UN investigators found that Islamist groups were taxing gold traders in Kidal, in the far north, and also in the gold-mining areas in the west of Niger.