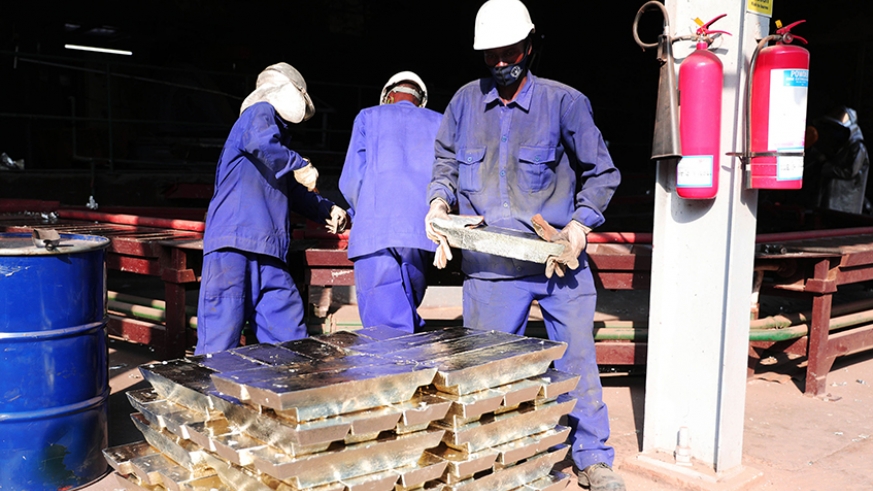 The year 2020 was on many fronts a trying period. But Rwanda’s economic sectors continued to operate against all odds.

The mining sector is one area that has witnessed a series of activities, despite the impact the Covid-19 pandemic has had on the sector.

It is true that the pandemic paralyzed businesses across the world, including the mining industry, whose products are sold to the international markets.

That is because industries in China and Europe had stopped operating or had significantly scaled down on operations, which sent the minerals market in tumble impacting Rwanda’s mineral exports especially tin, tungsten, and tantalum (3Ts).

Between January and February alone, revenue exports of 3Ts decreased by 30.9 per cent due to the drop in international commodity prices.

During the same period, prices of Coltan dropped by -4.6 per cent, Wolfram by -15.3 per cent, and Cassiterite by -14.5 per cent as demand for mined products fell due to slow economic activity.

Bernard Nsanzimana, a mining governance expert said minerals which are used to produce the same products also faced market shortages, across the world.

“This led in turn to the reduction of the mineral workforce and production in Rwanda, which negatively impacted the mining sector,” he noted.

However, in June right after mining companies restarted operations, the Government unveiled a series of plans to enable the sector to recover.

One key highlight was a focus on promotion of mining exploration.

The government through the Rwanda Mines, Gas, and Petroleum Board (RMB) embarked on an exercise of collecting geological information on where minerals are located and their probable quantities.

The idea was to attract and accelerate future investments in the sector.

“We are excited to see mining exploration activities taking a different shape,” John Kanyangira, Mining Traceability Division Manager at RMB, said of the result of the government’s plan to promote mineral exploration.

While Covid-19 took a heavy toll on the sector, Kanyangira highlighted that production is picking up as prices of minerals such as tin and tantalum start to rebound.

“Two months ago we started seeing production going up. This is because miners are returning to work and prices are favouring them to resume and continue production,” he noted.

As part of Rwanda’s economic recovery plan, a two-year agenda to facilitate businesses to resume operations, the mining sector was given a priority.

Government reorganised small scale mining operators, consolidating many of them into collective investment groups and licensed their new collective companies.

By June, more than 30 small scale concessions had been identified, which could be placed under collective investment schemes.

Donat Nsengumuremyi, the Director of Mineral Extraction and Processing Unit at RMB, told The New Times then that they had started with five mining blocks, which formed collective investment schemes as part of the pilot phase.

However, at least 32 concessions had been identified as those that can form investment schemes.

The already formed investment schemes have between two to 10 companies operating together, either through joint ventures, mergers or partnership agreements.

If the new approach that RMB is piloting succeeds, the Government said it has pledged to support the new collective investment schemes with international investment mobilization.

Rwanda seeks to become a regional mineral hub for processing and trading, and therefore, RMB is working to formalize regional trade in minerals to support local smelters, refineries and all value addition and export business.

This will also add value to job creation and raise export revenues, according to officials.

Other recovery measures include defining mining and mineral exploration as priority in Rwanda’s Investment Code, and establishing a Mineral Exploration Support Fund.

The aim is to attract international mineral exploration companies, and de-risk exploration investments, believed to be key to achieve industrial scale mining operations.

Rwanda is currently known among the top exporters of 3Ts (tin, tantalum and tungsten), but the plan is underway to diversify minerals that the country takes to international markets.

RMB has been pushing for strategic investments in processing and trading of gold, gemstones, and strategic minerals like Lithium, which has already proven to have potential.

Kanyangira said the government is optimistic the mining sector will rebound in 2021 driven mainly by increased investment in mining and exploration activities, and the fact that operators are becoming more professional.

The year 2020 saw Rwanda license 36 companies to carry out mining and quarry activities in its latest efforts to boost the mining sector and position it to drive post-Covid-19 economic recovery.

The licenses, approved by a cabinet meeting on December 14, 2020 also aim to diversify the country’s mineral exports, which are dominated by traditional minerals.

Of those, 17 firms were granted exploration licenses, 13 mining while six companies were licensed to carry out quarrying activities.

Francis Gatare, RMB chief executive told The New Times in a separate interview that for the medium-term strategy, the 17 exploration companies are more important.

“They are being licensed in areas where the Government has already done extensive ground surveys and made mineral discoveries,” he noted.

The mining licenses are mainly for tin, tungsten and tantalum, according to Gatare, who also disclosed that some companies were given licenses to carry out mining exploration for gold and gemstones.

In total, more than 40 licenses were issued by the board during the whole year.

Most accidents are caused by illegal mining. This year, mine accidents claimed 60 lives.

Rwanda announced in 2020 that it put in place an incentive package that seeks to attract investors to invest in mining exploration activities, part of the drive to strategically reposition the country’s mining sector in the region.

The new incentive package was announced Tuesday, November 10, ahead of the Africa Mining Forum, by Gatare.

According to Gatare, the incentive is a new provision in a revised Investment Code that targets to attract Junior Mining Companies, whose business model focuses on mineral exploration, and then sell their assets after making mineral discoveries.

The incentive will give them 10 years’ loss to carry forward. It means they can write off their losses for up to 10 years, because they are not generating much revenue but rather investing in exploration.

“We think that this is very competitive globally that should be attracting the so-called junior mining companies whose business model focuses primarily on exploration,” Gatare noted.

Previously, companies in exploration activities were given only five years of loss carry over.

During the same press conference, UK-based TechMet said it would deploy more capital worth $20 million (about Rwf19.5 billion) in its Rwanda operations in the next two years.

The data and research on geology and mining in Rwanda, which was recorded during the colonial era by Belgium, were digitised and returned to Kigali in February by Belgium.

The 16 terabyte files were being stored at the Royal Museum for Central Africa and are critical to identifying areas where mineral explorations were conducted during the colonial era.

This is thanks to the partnership between Rwanda and the UKAID funded Sustainable Development of Mining in Rwanda (SDMR) Programme.

Mining in Rwanda started in 1934 in Rutongo, meaning the country’s colonial masters, Belgium, have kept geology and mining data for 86 years.