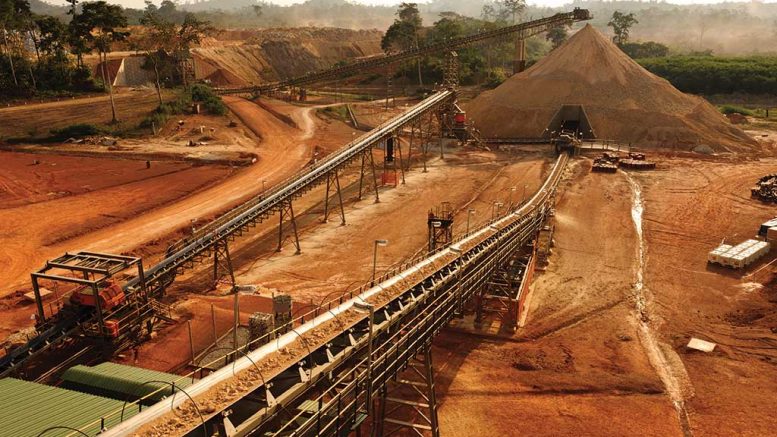 Perseus Mining (TSX: PRU; ASX: PRU ) is building its second open-pit mine in Cote d’Ivoire and its third in West Africa, and expects to pour first gold in December despite the COVID-19 pandemic.

On a recent conference call, managing director and CEO Jeffrey Quartermaine said development work on the Yaoure mine, 40 km from the capital of Yamoussoukro, was 52% complete, with US$29 million spent on development in the first three months of the year. In total, Perseus has spent US$129 million on developing Yaoure, or 49% of the project’s total capex of US$265 million.

“This has been one of the bright lights for us this quarter, and we continue to make progress on all fronts at Yaoure,” Quartermaine told analysts and investors on the call. “Our stretch target of pouring first gold by December 2020 continues to be within our capacity, provided we don’t have any unusual delays coming out of the virus later in the year.”

Fabrication of the SAG and Ball mills is complete and the equipment was delivered to site ahead of schedule in February, while other procured items have been moving efficiently through the port of Abidjan in Cote d’Ivoire and deliveries to the site have been taking place on a regular basis, unimpeded so far by COVID-19. It has completed 39% of its tailings storage facility, construction of the main Yaoure substation is 56% complete, and access roads are being upgraded.

“The pleasing news is that, notwithstanding COVID-19, cargoes are being efficiently cleared through the port of Abidjan and transported to site without too much delay,” he noted. “Yaoure is a very important project for Perseus and does underpin our future growth, and so we’re looking forward very much to delivering further progress on that.”

Perseus is also pushing ahead with exploration and has earmarked an exploration budget for the next 12 months of US$15 million this year — the bulk of which will be spent on areas around Yaoure, where management see “enormous potential to add materially to our reserve inventory there.” The balance will be spent at its two other producing mines. “We are accelerating our efforts on exploration, not only to extend the life of our existing operations but to, hopefully, also discover our next mine. We have some interesting targets.”

While supply chains remain open in Ghana and Cote d’Ivoire, the movement of local and foreign employees has been impacted by government-imposed travel restrictions, while work rosters have been extended. No cases of COVID-19 have been reported by any of the company’s employees or contractors at either of its two mines or at the Yaoure development project.

“We’re living in pretty uncertain times, and the COVID-19 pandemic is creating some serious challenges for us, but so far we’ve met these head-on, and we’re ahead of the game,” Quartermaine said on the call. “What happens from here remains to be seen, but we are confident that by remaining vigilant and being proactive, we will successfully see this crisis through.”

Quartermaine also noted that the company had offered its expat staff at Yaoure the opportunity to fly back to their countries earlier on, before the airports were closed down, but virtually all of them declined. “Almost to a man they said, ‘No way, we’re going to see this through,’” he said, while those at its operating mines also declined the offer. “Our people are there because they want to be there. By and large, the team was very determined to get through this. Now whether they have this same level of enthusiasm in another three months remains to be seen.” In the event of a medical emergency, Quartermaine added, a charter flight could be arranged.

In an email to The Northern Miner, Quartermaine explained that part of the company’s success weathering in the current public health emergency is due to the company’s seasoned management teams at each of its operations in West Africa that have successfully managed several in-country crises in recent years, including the Ebola outbreak during 2014-2016. The deadly disease provided Perseus with tested crisis management capabilities and systems that are proving useful today, he said.

Several of its key executives, prior to joining Perseus, had spent the Ebola crisis on the ground in Sierra Leone where infections were rife, he noted. “These guys brought a lot of first-hand knowledge and experience to the table,” he explained, “and, under my leadership, our team has designed and implemented the systems that we have deployed with success to date throughout our business.”

“They had been part of a team that operated all of the way through Ebola without losing a day of production,” Quartermaine said. “The strategy that their former employee deployed was taken and refined for our situation. This is what we refer to as our ‘Island Mode’ business model.”

Essentially, the company has divided its mine sites into three zones – green, orange and red. The green zone contains all of the equipment, activities and people required to guarantee business continuity, he explained. “Access to this zone is only possible after a period of quarantine to demonstrate that people are COVID-free,” he said. “The orange zone is a little more relaxed – this is where the actual mining takes place – and the red zone permits interface with the community.”

“On top of this, we have deployed a lot of other protocols and practices aimed at making sure our supply lines remain open and ensuring that we will be able to continue operation, even if the virus spreads into our surrounding community – which pleasingly it has not. I would like to think that we are assisting this by procuring and distributing supplies to local health centres, undertaking disinfectant spraying in villages, funding publicity programs on local radio advising people how to avoid catching and spreading the virus, etc.”

The Island Mode system has not been fully deployed at Yaoure, however, as the development site “is simply too large and involves too many people – a large proportion of whom are residents of the local area, and we simply cannot house and feed all of these people in a quarantined area even if they were willing to go in there.”

“We do continue to make very good progress, however, and are on track, but we may suffer schedule disruption in the future if we are unable to bring specialist construction technicians and commissioning people to site when needed due to international and local travel restrictions. We are not at that point, and hopefully the travel restrictions will be lifted before it becomes an issue.”

Quartermaine, who joined Perseus as chief financial officer in 2010 and was appointed managing director in January 2013, also praised the governments of both Ghana and Cote d’Ivoire for acting swiftly when the dangers of the pandemic became known, noting that statistics “are remarkably low by comparison to developed countries.”

He noted that reported cases in both countries were low by comparison to many other countries. (According to the World Health Organization, Ghana had 1,671 confirmed cases and 16 deaths and Cote d’Ivoire 1,238 cases and 14 deaths as of April 30.) “Whether this is a function of low levels of testing, misdiagnosis, etc., I really don’t know,” Quartermaine said. “What is clear though is that both countries acted very promptly and very firmly as soon as the problem surfaced (which not every country in the world did, to their great regret I am sure).”

“Obviously the resources available to these countries are much lower than elsewhere, but they seem to be coping well at the moment and are getting solid support from industries such as the mining industry.”