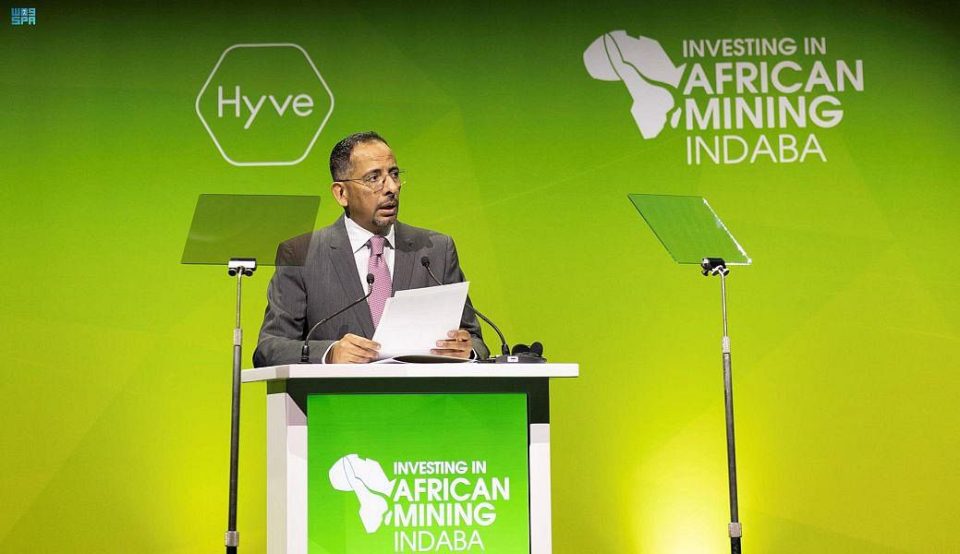 A Saudi delegation, headed by the Minister of Industry and Mineral Resources Bandar Al-Khorayef, concluded a visit to South Africa, the Kingdom’s SPA news agency reported on Saturday.
The delegation participated in the activities of the African Mining Indaba conference, which was held in Cape Town from May 9 to 12, and also met with a number of ministers, officials and major investors.
The delegation included representatives from the Saudi Industrial Development Fund and the Saudi Geological Survey, in addition to a number of leaders in the industry and mineral wealth fields.

On the sidelines of the conference, Alkhorayef met with his South African counterpart and co-head of the Saudi-South African Joint Committee, Ebrahim Patel, to discussed the way to advance the committee’s work and strengthening the mechanisms of action between the two parties. They also reviewed the promising opportunities between the two countries in the industry and mining sectors, in addition to a number of issues of common interest.

He also met with his counterparts in Sierra Leone, Chad, Senegal, Mali, Angola and Niger to discuss enhancing cooperation opportunities in the mining sector.

The Minister of Industry and Mineral Resources praised the South African government and its people for their warm welcome and hospitality, expressing his appreciation to the government agencies participating in the global conference under the umbrella of the “Invest in Saudi” program.
He said these efforts were clearly reflected in the level of representation and the remarkable presence of the Kingdom’s pavilion, as well as the events organized by the delegation.

The Kingdom’s participation in the conference was an important factor in highlighting the country’s efforts to develop the mining sector, which achieved record revenues in 2021, amounting to SR727 million ($194 million) and succeeded in attracting investments worth more than SR30 billion. It is also working to stimulate additional investments worth SR120 billion in a number of projects that are currently being studied.

The Kingdom has worked to amend the regulations and legislation of the mining sector to provide a clear, transparent and accessible environment for investors and financial incentives to benefit from Saudi Arabia’s mineral wealth, as it aims to increase its contribution to economic growth, diversification, creating high-value jobs, and transitioning to clean energy.

Kakula development ahead of plan