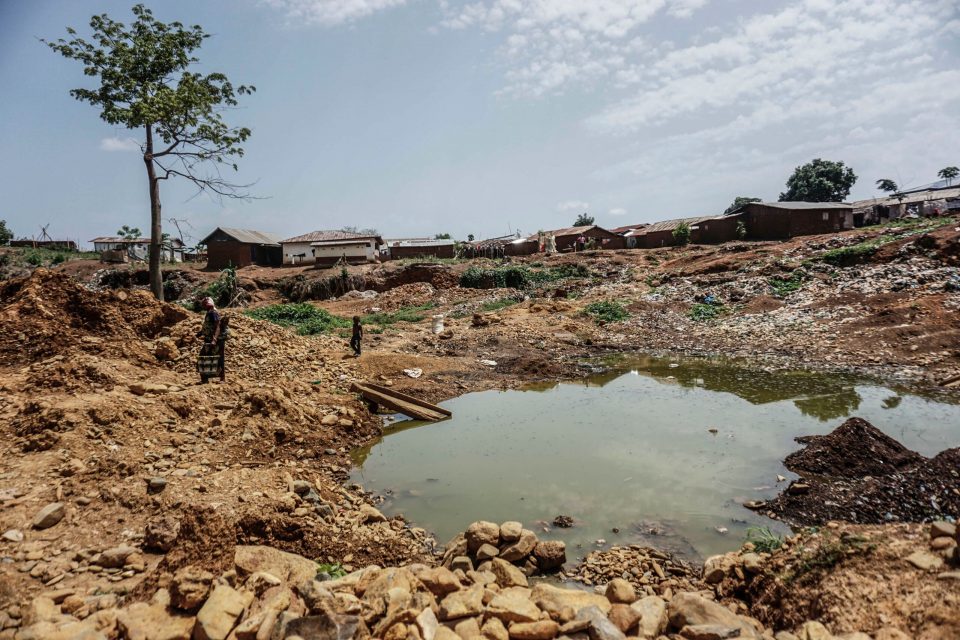 Kumaro village is in ruins.

It was never an easy place to live, but at least fresh, cold water would always trickle down from the mountain to quench the thirst of its nearly 2 000 residents, and to feed their crops.

That all changed three years ago, when a Chinese mining company called the Wongor Investment and Mining Corporation started looking for gold nearby. The source of the water was destroyed, and local lands were destroyed by mining activities.

“I was happy when the company came to this town. I thought they were going to do great things for this community. But since they came, they have done nothing but to exploit our resources and deprive us of our source of livelihood,” said Tamba Gborie, the 64-year-old chief of the village in Kono district, in eastern Sierra Leone. As he speaks, he gestures towards the parched, raw earth where village farms used to be.

Wongor secured the mining concession in an agreement brokered by the central government and the area’s paramount chief on behalf of the community. But while this may have resulted in increased tax revenue for the government, the community has been left to count the cost.

“Our wives and children have to wake up as early as 4am to get clean water. Otherwise, they will wait until 4pm, after the mining company has completed work for the day. Can you imagine how painful this is?” said Gborie.

Kumaro residents used to get by on subsistence farming and artisanal mining. But with their lands mostly destroyed, so are their livelihoods.

“I cannot estimate how many acres of land I lost to this company. My father left me a lot of land that I have been farming on for over 30 years,” said Tamba Bona, a local vegetable farmer. He used to grow everything from rice and plantains to bananas, pumpkins and peppers; now most of his land is unusable. “My life was not the best, but it was okay. My wife and children would have food. I would easily afford my children’s school fees and keep small savings too.”

That all changed after Wongor arrived. “I cannot grow crops any longer and I cannot mine gold either. This has made it difficult to pay school fees and feed my family,” Bona said.

He and other villagers were given some compensation by the company, but not nearly enough to cover the damage. Bona himself received just 9 453 000 leones (about R13 500) for the 10 to 20 acres of land that was affected. He said he had to accept the little money on offer or face the prospect of forfeiting his inheritance without a cent.

‘They all left smiling’

Because Wongor has the stamp of approval from the central government, the residents of Kumaro have no faith that Sierra Leone’s legal processes will deliver justice. Instead, the first avenue to seek redress is through their own customs and traditions.

In particular, they are waiting for the area’s paramount chief to intervene. “This is how we

have been settling our disagreements in this town. We have not gotten into any fights with the company. Our custom demands that we listen to the paramount chief,” Bona explained.

In rural Sierra Leone, paramount chiefs are the political figureheads of their people and custodians of the land. With this comes huge authority. They are greatly respected — and feared. They are considered the bedrock of political administration across the country, and once appointed a paramount chief can only be removed from office by the president.

There are 14 paramount chiefs in Sierra Leone, each of whom occupies a seat in parliament as well.

Given the strategic nature of their roles, they are crucial to the government of the day and can exercise almost unlimited authority at the local level. In rural areas, most land effectively belongs to the paramount chief, who has the power to allocate it as he deems fit.

There is no real oversight for the paramount chief’s decisions.

Kumaro village falls under the authority of Paramount Chief (PC) Bona Foamansa III, of the Nimikoro Chiefdom in the Kono district. He rules over a chiefdom of 157 villages, with an estimated population of 61 000 people.

The Mail & Guardian visited PC Bona’s home in Kono district earlier this year. His white mansion looks like a palace in the middle of the forest, and it was crowded with visitors — most of whom were asking him to resolve a dispute. “I have to drill deeper into the root cause of the problem and give advice to all parties involved. You can see that they all left smiling,” he told the M&G.

He said that his traditional method of dispensing justice is important to prevent lingering tensions within communities. ‘“We do not believe in taking conflicts to courts. Our culture and traditions do not favour that,” he said.

When asked about the situation in Kumaro, PC Bona defended his right to decide how the village is developed — and indicated that he had no intention of changing his mind on Wongor.

“That is what the tradition says. This is how it has always been,” he said. “As custodians of the land, our duty is to use these lands for the benefit of our people. We have the right to allocate these lands to anyone we think can bring development to our communities.”

PC Bona argues that Kumaro squandered its opportunity to benefit from mining activity in the past. He said that the type of mining previously practised in the community was artisanal and poorly coordinated; and that it had brought no meaningful development to the village. With Wongor, at least the national government was getting increased revenue; and security in the area was better.

“We are actually comfortable with this,” he said. “If I get a reputable company to give me a particular percentage that would bring development to this community, it wouldn’t be good if I reject it.”

No wonder PC Bona is comfortable: as paramount chief, he receives part of the surface rent the government collects from the mining company. This was confirmed to the M&G by Daniel Lavalie, an engineer at the ministry of mines and mineral resources in Kono, who said that a percentage of the surface rent paid by mining companies is allocated to a community development fund — and that part of this fund is paid to the paramount chief.

PC Bona has publicly pledged to share 60% of the revenue that he receives from Wongor’s Kumaro operation with the affected community. So far, however, the village has not seen any of this money.

PC Bona wields a lot of power in this part of the country — perhaps too much. “The paramount chiefs command a lot of power when it comes to land ownership here in Kono. These excessive powers must be checked. Otherwise, they are very prone to abuse,” said Alex Komba Fomba, the programme coordinator for youth empowerment for advocacy, human rights and development in Sierra Leone, a civil society organisation based in Kono.

Fomba is a native of the area, and has seen time and again how local communities have been excluded from the proceeds of gold and diamond wealth. In fact, the scars of this exclusion are visible all over the area: the dusty roads, damaged landscapes and shabby homes tell a story of exploitation and neglect.

All this despite the fact that Sierra Leone is blessed with considerable mineral wealth — in particular its diamonds. All told, the country’s diamond industry has produced an estimated $6.7-billion of revenue from mining the gemstones — but little of this wealth has made it back to the areas where the diamonds are actually mined.

If anything, the presence of diamonds has been actively detrimental. Sierra Leone’s rebel war, for example, was partly fuelled by a blood diamond trade, which provoked a major humanitarian tragedy. A staggering 75 000 people were killed, with half a million refugees and half of the country’s population displaced between 1991 and 2002.

“We live in communities where much is taken away, but little is given back,” Fomba said. “It feels like a hopeless situation.”

For things to change, he argues, local communities need a seat at the table. “If the people are part of the negotiations, they will give the companies terms and conditions that can benefit communities. But, these agreements are negotiated in secret.”

And when things do go wrong, communities struggle to access any form of justice.

Many people are scared and overwhelmed by the complexities of the formal legal system, and distance is a major inhibiting factor — sometimes the courts are very far from villages, and transportation is a challenge. “We know of cases that have been thrown out of court for either lack of evidence or affected families that did not show up,” said Fomba.

That’s not the only challenge. Lawyers are prohibitively expensive, hearings are often adjourned at short notice, and community members are often scared that there may be real-world repercussions for taking on big companies, the national government and influential local figures such as the paramount chief.

So instead of approaching the courts, communities usually approach the paramount chief himself, despite his potential conflict of interest, or ask civil society organisations such as Fomba’s to help mediate. Fomba has led many such mediations over the years, with limited success. He says that all too often, mining companies make grand promises about investing in the community — “This feels like a bait that communities can hardly resist” — but fail to deliver.

Sierra Leone’s National Minerals Agency is supposed to supervise the relationship between mining companies and their primary host communities. A key part of this is ensuring that host communities are protected, and that companies keep their promises.

But it is not just Kumaro’s residents who question whether the agency is living up to its mandate. In April this year, for example, the Human Rights Commission of Sierra Leone completed a two-day monitoring exercise on the operations of Koidu Limited, another mining company in Kono district. Koidu, founded by a former mercenary, is one of the largest miners in the country.

The company’s general manager, Rocco Vermeulen, told the commission that since their operations began they have met all the provisions outlined in their mining lease. He said that sometimes the company even went beyond its obligations in order to maintain good relations with the community.

But after investigating for themselves, the Commission reached a different verdict. It found that the company did not uphold satisfactory safety measures for its workers; had low levels of employment for local people; and offered unsatisfactory compensation and relocation packages for people impacted by their operations.

International anti-corruption watchdog Transparency International reached a similar conclusion in a damning 2017 report: “Since Koidu Limited took control in the early 2000s, hundreds of residents have been evicted from their homes to make way for the expanding diamond mine. Some families were included in the company’s resettlement programme while many more were left homeless and destitute. Local leaders and land administrators did little to uphold citizens’ land rights and protect their homes … Those who were rehoused soon discovered the company’s promises of modern houses, running water, schools, clinics and recreation grounds were not materialising once the mine was established. The hundreds of millions of dollars generated by the extraction of diamonds continue to leave Kono, and the country, without benefitting anyone in the community.”

It is a situation that will sound all too familiar to the people of Kumaro. “Whenever I think about it, it makes me lose my mind and I feel like doing something crazy,” said Tamba Bona, the farmer from Kumaro.