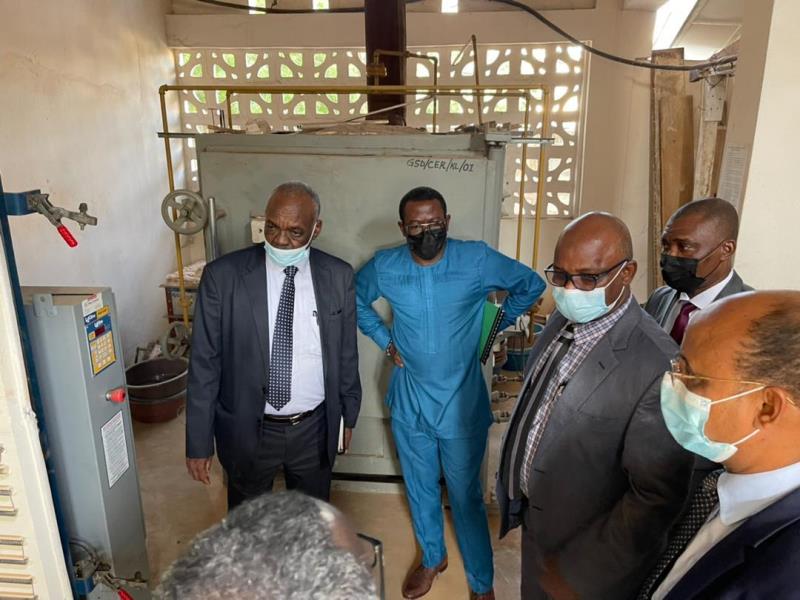 The Minister stated this when he hosted the Minister for Minerals of Sudan, Mohammed Basheer Abdalla Mennawwi, who is in the country to study Ghana’s mining operations.

The Sudanese Minister led a three-member delegation including the Sudanese Ambassador to Ghana, Mr Mohamed Abdehahman Yasin Mohamed to hold bilateral talks on developing the mining sectors of both countries.

The mutually beneficial meeting centered on adding value to the minerals resources produced by the two countries.

The discussion also focused on creating a value chain in the mining sector that would create long-term benefits for communities and the country as a whole.

Interacting with his Sudanese counterpart, the Minister extolled the Sudanese government for the effort made in embracing democratic reforms.

He noted that the far-reaching impact of these democratic moves needs the development of a framework in that direction.

Sudan is an oil-rich nation, plagued with conflicts that had stampeded its economic growth.

Mr Jinapor added that “democratic accountability of Sudan is a credit for not only Sudan but Africa as a whole”.

While commending his counterpart for making moves to seek an audience with him, the Minister assured him of Ghana’s unflinching support in using democratic means to exploit its natural resources for the benefit of the citizens.

He cited the cocoa industry where Ghana and Cote d’Ivoire were able to determine the floor price.

On his part, the Minister of Minerals for Sudan, Mohammed Basheer Abdalla Mennawi said his country has since 2018 established a national mining refinery, which has been adding value to the minerals.

He also commended Ghana for being a shining light for peace, stability, and progress on the continent.

As part of his four-day official visit to Ghana, the Sudanese Minister paid a working visit to the Minerals Commission where he was briefed by Mr Martin Ayisi, the Chief Executive Officer of the Commission, on mining operations in Ghana, particularly in the areas of licensing régime for small and large-scale mining, the mandate of the Commission, sustainable small scale mining, Corporate Social Responsibility of mining firms and Alternative Livelihood Scheme being rolled out by Government.

Mr Ayisi said the Commission had introduced digitisation programme and e-services in the small scale mining processes which will be fully functional in September this year”.

The Commission intended to use drones to help curb illegal mining activities and also adopted the mercury-free mechanism to mine.

The Sudanese delegation was accompanied by a Deputy Minister in charge of Mines, George Mireku Duker.

He also paid a working visit to the Ghana Geological Survey Authority (GGSA) and would later this week visit Anglogold Iduapriem Gold Mines in Tarkwa.