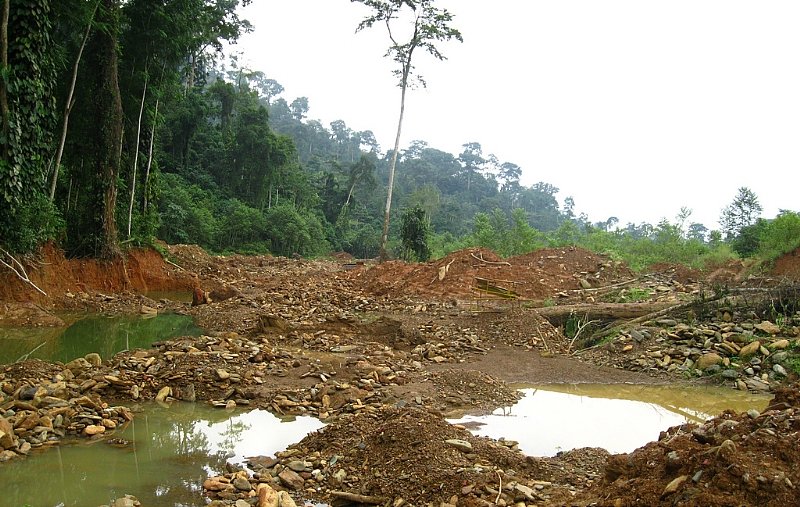 In the Report, the Commission examined the complaints of mining communities regarding the environmental destruction they suffer at the hands of both large mining companies and the so-called “small-scale” mining operators.

Referring to galamsey, the Report “strongly” advised the Environmental Protection Agency (EPA) to “enforce the standards and guidelines relating to the operations of Small-Scale Miners, “whose activities also cause serious environmental pollution.” The Commission ingeniously advised the EPA to “seek help”, if necessary, from neighbouring countries (such as Burkina Faso) “that have successfully regulated the activities of their indigenous miners.”

If this unusual CHRAJ Report had been read by the Government of the time, let alone implemented, many of the problems we currently face over galamsey would have been nipped in the bud. But the Report, like many other studies that have been undertaken into aspects of our national life, disappeared into the great “black hole” of indifference that constantly swallows any ideas meant to improve the lives of our people.

So long as there’s no money to be made by Government officials from the recommendations of a Report, they won’t even grace the Report with a reaction of any sort! They won’t say they agree or do not agree with the findings. They would simply pretend that the Report does NOT exist.

This is where our Parliamentary system disappoints many of us. Every Report by, or about, a public body, should be sent to Parliament, filed in the Parliamentary Library, and if possible, referred to s Parliamentary Committee. Once the Report reaches them, MPs should formulate questions to ask the sector Minister. Where the executive shows no interest in a Report, Private Member’s Motions urging the House to take “adopt” the Report’s findings, should be proposed and allowed by the Speaker.

Since the CHRAJ Report was published 13 years ago, succeeding governments have spent huge amounts of money trying to remedy some of the problems the Report highlighted. Yet the situation has got increasingly worse. In 2008, rivers like the Ankobra had not yet been destroyed by galamseyers. But today, not only the Ankobra but also, the Tanoh, Birem, Densu and many other major water-bodies are unsafe to drink.

But, if we are to go by what was said by the new Minister of Lands and Minerals at his vetting, we shall soon undertake another “study” of what to do about mining. Meanwhile, common diseases suffered by communities that dwell close to mining sites, such as skin diseases, chest diseases (including tuberculosis), diarrhoea and malaria, as well as typhoid, are on the increase.

Thirteen years ago, those who compiled the CHRAJ Report warned the nation that communities very close to centres of mining (“like Anyinam”) were complaining that air pollution makes them experience dizziness and headache. Has anything been done about that, or the situation “in Akatakyieso, Binsere and Dokyiwaa “? These communities said that “the prevalence of mosquitoes in their communities, due to stagnant water in abandoned pits and trenches dug while mining”, was causing malaria amongst the populace.

The CHRAJ Report elaborated: “Communities may have a legitimate claim that the water-borne diseases they suffer are caused by the bad quality of water after their rivers and streams are destroyed by large scale surface mining. For instance, the people of Abekoasecomplained of episodes of cyanide spillage which polluted their main source of water and contaminated fish in the river.”

The Report recommended further that “testing of fruit, fish and bush meat samples in order to ascertain whether chemicals used in mining are present in them.”

The Report gave a detailed account of how mining companies commit atrocities through private security personnel they employ to protect their concessions and property from encroachers and trespassers.

Apart from the private security of the companies, “all the mining companies, with the assistance of the Government, periodically deploy state security personnel, especially police and military,” to protect their property/concessions, the Report noted.

“Almost all the companies operating in the communities visited, including, AnglogoldAshanti, AGL, CAGGL, Chirano and BGL have established permanent posts in their concessions for the military, the police or both. The Military/Police operate from the posts thus established by the companies on rotation bases. From the information gathered, periodic exercises carried out by the Police/military, codenamed “Operation Flush Out” lead to gross human rights abuses during these operations.”

A very realistic approach is thus needed if the interests of the mining communities are to be safeguarded as a balance to the security of mining company operations. At the moment, the communities are equally at the mercy of both the companies and the galamseyers. The Government cannot take sides and thus needs to be hard-headed and free of illusions about the situation. Otherwise, there will soon be no Ghana left. The rivers would have dried up and the forests turned into arid wastelands.