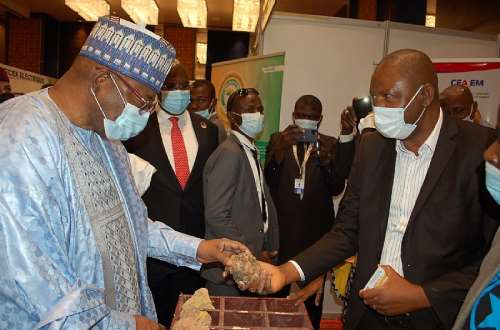 Organised by the Commission of the Economic Community of West African States, the Government of Niger and the event firm AME Trade Ltd, the kick-off of the Forum’s activities was witnessed by over 12 Ministers of Mines, Energy and Oil from countries of the regional organisation and the People’s Democratic Republic of Algeria.

Several other guests were in attendance, including Nigeria (guest of honour), the African Energy Chamber, the African Petroleum Producers’ Organisation(APPO), the ECOWAS Federation of Chambers of Mines, and regional civil society organisations working in the geo-extractive sector.

Delivering his speech, the Prime Minister of Niger recalled the current challenges facing the region, namely the breakdown of constitutional and democratic order, and insecurity arising from recurrent attacks by armed terrorist groups in some countries in the region. He called for better political and security stability to ensure the harmonious exploitation of our mineral and oil resources to enable them contribute significantly to the development of our countries and the welfare of our people.

Mr Sediko Douka, ECOWAS Commissioner for Energy and Mines, representing H.E. Jean-Claude Kassi Brou, President of the Commission, had earlier recalled that in line with its revised Treaty, ECOWAS as a people seeks to “create a borderless, peaceful and coherent region, based on good governance where the populations have the capacity to access and exploit resources through the creation of opportunities for sustainable development”.

The mobilisation of the Government of Niger, according to him, is a sign of the importance the Nigerien authorities attach to the well-being of its people who have great expectations regarding the benefits to be derived from the exploitation and development of its rich subsoil resources. This commitment also shows Niger’s readiness to support ECOWAS in the actualisation of its vision and the ambitions contained in its revised Treaty, said Commissioner Sédiko Douka.

Still speaking on behalf of H.E. Jean-Claude Kassi Brou, Mr Douka also pointed out that the mineral resources sector in West Africa faces several challenges, including (i) the legislative and regulatory frameworks; (ii) low level of local content, Corporate Social Responsibility (CSR) to be strengthened; (iii) inadequate human resources especially in the negotiation of complex contracts; (iv) a low level of added value due to the fact that mining activities are dominated by the extraction and export of crude ore with very little processing of products locally; (v) difficulties in organising, supervising and regulating artisanal, semi-mechanised and small-scale mining operations; and (vi) insufficient geological mapping.

In this regard, ECOWAS has undertaken several actions at the regional level to solve all these challenges, including the adoption of 7 Community texts in the mining sector, notably the ECOWAS Mineral Development Policy, the Regional Mining Code, the guidelines on local content and corporate social responsibility and also 7 texts for the oil sector including the Regional Oil Code, the Hydrocarbon Sector Development Policy, the Regional Strategy for the Popularisation of Liquefied Petroleum Gas as a Modern Domestic Energy, the Regional Directive on the Harmonisation of Motor Fuel Specifications,” said Commissioner Douka.

Other speeches delivered during the opening ceremony included those of the Minister of State for Petroleum Resources of the Federal Republic of Nigeria, Chief Timipre Sylva, Ministers Oussseini Hadizatou Yacouba of Mines and Mahamane Sani Mahamadou Issoufou of Petroleum, Energy, and Renewable Energy of Niger, and Oudou Ambouka, Governor of the Niamey Region

Several activities have been lined up for the Niamey Forum, notably exhibitions, thematic conferences and workshops, facilitated by experts in the mining and petroleum sectors, moderated by prominent personalities such as former Niger Senior Minister of Petroleum, Foumakoye Gado, current High Representative of the President of the Republic of Niger, Hon. Mohamed Jidoud, Minister of Finance of Niger, and Commissioner Sédiko Douka.

It should be recalled that ECOMOF aims to develop the mining and petroleum potential of the Community, promote socio-economic integration, develop artisanal and small-scale mining operations and organise geological, mining and oil database in ECOWAS Member States. It also aims to be a regional platform for discussions and meetings with ECOWAS Ministers responsible for the development of the mining and oil sector, their respective national experts, as well as all key stakeholders in the geo-extractive industries.

Lastly, the Forum aims to provide a framework for collaboration and dialogue to support efforts put in place for the architecture of the geo-extractive sector, which is fully harmonised, organised and developed. This is to ensure that it fully plays its role as the development anchor of the region.