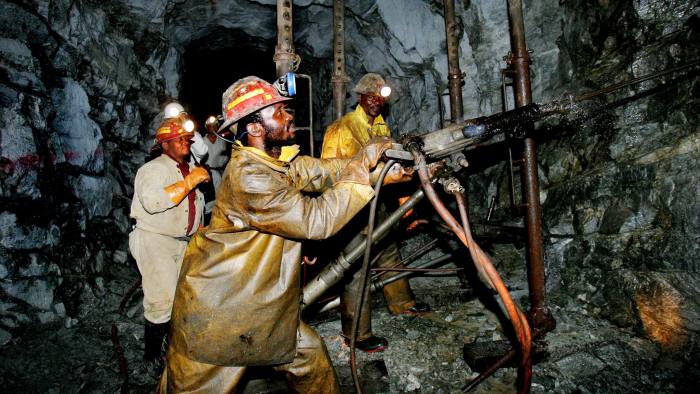 The Ghana Mineworkers Union (GMWU) of TUC-Ghana, as part of its contribution to the development of human resources and health and safety of Ghanaians, has presented health items and educational scholarship worth more than ¢50,000 to four institutions in the mining communities.

The beneficiary institutions are OLA Girls Senior High School at Kenyase in the Ahafo Region, Patmos Children’s Home at Obuasi in the Ashanti Region, Tarkwa Municipal Hospital in the Western Region and Adausena Health Centre at New Abirem in the Eastern Region.

The donations were made recently as part of activities marking Ghana Mineworkers Union’s Maiden Miners week celebration, with the goal of getting closer to the people in the mining communities and together join forces with the chiefs and people to advocate improved infrastructure for the communities, given the huge resources that emanate from those areas which generate foreign exchange for Ghana.

The theme for the Maiden Miners week was “Integrating Labour and Community interest for socio-economic development.”

The leadership of the GMWU made up of the National Chairman – Mensah Kwarko Gyarkari; General Secretary – Abdul-Moomin Gbana; Deputy General Secretary, Jerry Andoh and Head of Training and Programmes – Mrs. Vida Brewu, were joined by some members of the GMWU’s National Executive Council to make the donations to the beneficiary educational and health institutions and also paid courtesy calls on some chiefs at Abirem, Obuasi and Tarkwa. The chiefs included Nana Amoh Kyeretwie I of Abirem; Opagyakotwere Bonsra Afriyie II, Adansihene and Nana Kwabena Angu II, of the Apinto Divisional Council at Tarkwa.

The GMWU National Chairman, Mensah Kwarko Gyarkari said the visit to the chiefs was to assure them of the determination of the leadership of the GMWU to engage with them, so that together they can lead the crusade for better infrastructure for the mining communities.

He stated “we need the total support of our traditional chiefs to ensure that government initiates deliberate and coordinated interventions to addressing the huge infrastructure deficit in the mining towns. Infrastructure in our mining communities must reflect the huge revenue generated from there.”

The GMWU National Chairman indicated that since their members leave and work in such communities, improvement in the infrastructure, especially the road network will also impact positively on their living conditions so they can continue to give of their best in mining the precious minerals for the general good of Ghana.

The GMWU General Secretary speaking at the presentation at OLA Girls Senior High School at Kenayse, advised the students to study hard because the future that lies ahead of them is great.

He urged them to pay serious attention now to the teaching and learning, “so that you will be well prepared to contribute constructively to Ghana’s development in all fields of endeavours. He gave this assurance to the students. We look forward to welcoming you in the not too distant future into our fold as you get opportunities to work in the various mining companies.”

The GMWU General Secretary used the occasion to remind Ghanaian workers not to forget the sacrifices of their past union leaders to protect the rights of workers and also to advance their socio economic interest.  This according to Mr. Gbana is what the union has lived up to for the last 76 years, and counting, and will always strive to make the GMWU as a special purpose vehicle  at the forefront protecting and promoting  the rights, welfare and well-being of workers as well as championing better socio-economic facilities for Ghanaians in general.

The scholarship beneficiaries, Emmanuella Anokye and Joshua Obeng were grateful to the GMWU for supporting their education which, they described as a solid investment in their future.

The officials at the various institutions that benefited from the GMWU donations expressed their appreciation to the union leaders and entire membership for extending a helping hand to them with critical items to promote quality healthcare and education towards the national development course.

Liebherr to present its latest innovations at MINExpo 2021

Lead. Who says this battery metal has gone flat?