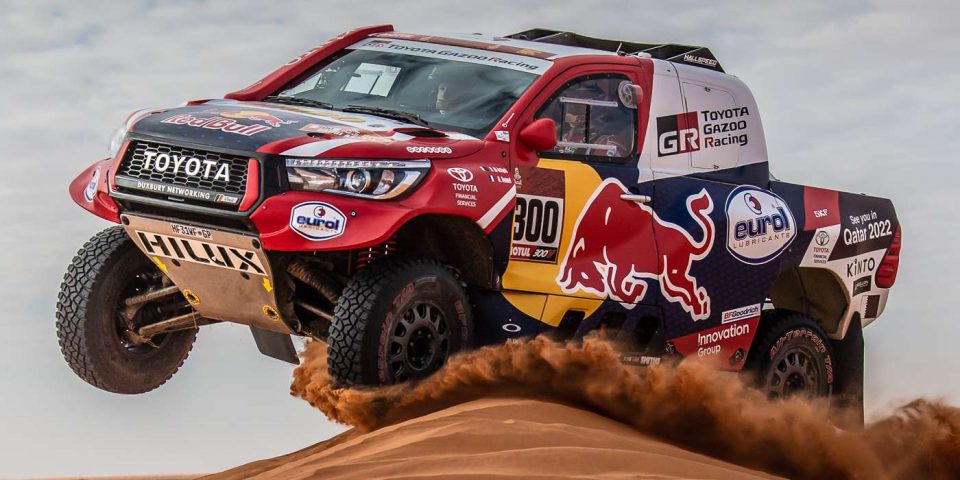 The 44th edition of the gruelling Dakar Rally, which was hosted in Saudi Arabia for the third time, started and finished in the city of Jeddah. Taking place from 1st to 14th January 2022, the race was divided into twelve competitive stages, with a rest day after Stage 6 near the Saudi Arabian capital of Riyadh.

Nasser and Mathieu opened their campaign in fine style, winning the short prologue between Jeddah and Ha’il on January 1st, enabling them to choose their starting position for the first stage. Selecting to start in tenth position, the Toyota Hilux crew went on to extend their early lead with a Stage 4 win.

SKF is an avid sponsor of motorsport and SKF products have been the brand of choice for TOYOTA GAZOO Racing in their off road arena for as many years as this highly successful team has been competing. “SKF is always our first choice,” affirms Glyn Hall, Director of Hallspeed (Pty) Ltd. “Dakar is the biggest, longest and toughest motorsport event in the world and we need peace of mind when choosing components on the car. Personally I have trusted SKF for the past 30 years and I sleep well knowing we have top quality every time”.

“We are particularly proud of our longstanding association with Glyn,” says Gary Czapski, SKF Sales Manager – Automotive and Commercial Vehicles (VSM) Southern Africa. “The Dakar Rally is indisputably the ultimate test of endurance for both vehicles and drivers. It is therefore imperative that all products used on the participating vehicles meet the high quality standards necessary to be able to withstand the hardships and rough terrain encountered during this long rally. Ultra-reliability is the name of the ‘winning’ game here and SKF products deliver.”

The Toyota Hilux’s engine, gearbox, driveline, differential, exhaust, as well as the vehicle’s steering and suspension systems are fitted with SKF products that include a range of bearings, high pressure wiper seals and grease as well as lubrication solutions. “The fact that SKF bearings fitted to all four TOYOTA GAZOO Racing vehicles performed problem-free throughout the Dakar is testament to the quality of our brand,” notes Gary.

With over 100 years of manufacturing expertise, SKF uses only top quality materials and best-in-class practices to provide products that set the industry benchmark. SKF’s association with the winning TOYOTA GAZOO Racing team serves as an ideal platform to highlight the capabilities of its quality products and to increase brand visibility.

SKF extends sincere congratulations to Nasser and Mathieu on their epic Dakar win as well as to the other TOYOTA GAZOO Racing teams on their great performance: Giniel de Villiers / Dennis Murphy secured 5th place in the overall standings, Shameer Variawa/Danie Stassen posted the 7th fastest time in Stage 7, finishing 15th overall, and Henk Lategan/ Brett Cummings finished in 31st position, this despite a broken wheel hub in Stage 4.

“To Glyn and all who supported the teams – what a race and what an achievement,” lauds Gary. “Some amazing racing saw all four Toyota Hilux vehicles crossing the finish line, without any doubt making TOYOTA GAZOO Racing the talking point throughout the 12 stages of Dakar! We look forward to our continued association and to sharing many more successful journeys with TOYOTA GAZOO Racing in the future.”

Turkish Investors to Widely Partake In Mineral Resources In Ethiopia